I have been playing this game for a week or so, and I love it!

However, I have a problem with pushback trucks. The airplanes arrive and complete all the processes until it gets to the pushback, which is never completed, as you can see in the following picture: 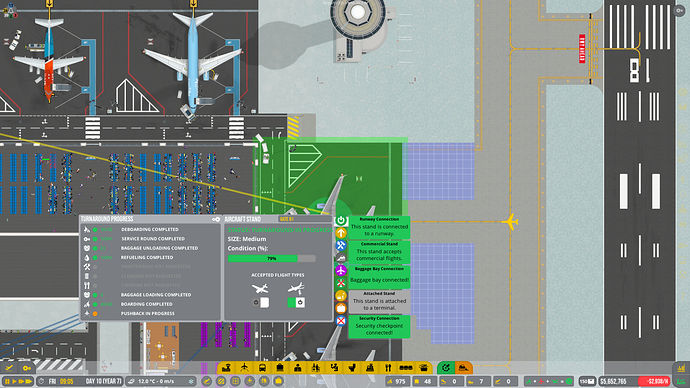 Does anybody have the same problem? or know how to solve it?

Thank you in advance!

I think it has something to do with the stairs, as they are not removed when the boarding finishes. In this picture, it is possible to see two examples (the two stands on the left)

My guess is your pushback point is reserved by an already taxiing plane, so it’s waiting for that plane to pass.
Here’s a pic of something i do with one way nodes to keep pushback points from being occupied by taxxiiing planes. The only one passing over them are coming from shortby so they don’t createas much hold up as the ones coming from the runway to the terminal. 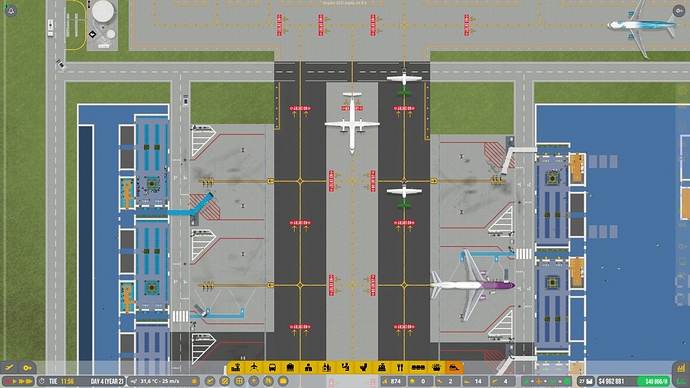 Just a suggestion:
Have you set the pushback point?
Click on the stand to open it’s menu. To the right is a purple button with a white airplane on it called “Set Pushback Point”. Click it and then click on the taxiway where you want the planes to be pushed.

How wide are each of your taxi ways?

My taxiways are normally five tiles wide, but medium sized aircrafts are wider than this, so I made some taxiways even nine tiles wide. But the width makes no difference, as far as I experienced taxiways can even be only a single tile wide. As long as they are marked as taxiways (the glowing dots in the middle) they will work.
[EDIT] Ooops… your post was addressed to dewitjur. My mistake.

@frn_fq I suggest you to create a bug report via in game bug report system. There is probably an order issue.

Also does it work when you reload save file?

5 tiles on the pic wich is an oldie, but these days i make sure to have 2 unused tiels next to each taxiway wich i still put at 5 wide, no point in making it wider for Wings that don’t touch the ground anyway.

no point in making it wider for Wings that don’t touch the ground anyway.

But when taxiways are close to buildings or to each other (one in each direction, for example) the planes overlap the buildings or the other planes. You could just leave ground or concrete/asphalt tiles in between, of course, or don’t care at all (for there is no collision physics in the game), but I prefer to make the taxiways as wide as the planes using them. It’s a matter of taste, I guess.

@frn_fq were you able to resolve this issue?

Hi everybody! First of all, thank you for your answers.

I will try to answers your questions:

@Sepone Yes, the pushback point is correctly set.
@Stu My taxi wides are normally 5 tiles wide.
@EG0611 Yes, it also happened after I saved the game, with a different name (as I have seen in other posts).
@dewitjur probably you are right, but it was not the case, as planes stayed in the same position for many in-game hours, until I had to cancel the turnaround process, in order to allow other planes to arrive.

I believed the problem was in any process related to the stair trucks. I have solved the problem, at least partially, by upgrading the stands with a jetway. After I did this, the planes completed the turnaround process without problems… Could these two things be related @Olof?

I believed the problem was in any process related to the stair trucks. I have solved the problem, at least partially, by upgrading the stands with a jetway. After I did this, the planes completed the turnaround process without problems… Could these two things be related @Olof?

Yes, were you able to see if all passengers boarded correctly? When using the stair truck.

Airplanes in the future may have collisions, or failures? Breakdowns will force planes to remain on the ground and therefore pay more taxes and also have to be moved

Okay, I tried to “reproduce” this problem, but nope, the planes get pushed back all the time. At least I can say now, what the problem is not related to:

Sorry frn_fq, I have no idea what is causing this weird problem…

Is this happening to every medium gate ?
If not, is there anything different at all about these gates from the working ones ?

Yes, all the doors had the same problem. I tried to change the pushback point to different places on each door, but this did not solve the problem. It was only solved when I uploaded each door with jetways.

I created a new airport and, by the time being, it seems that all work properly.