So I just spent a few hours builing an awesome looking small airport with several remote stands and ran into a few issues and bugs. 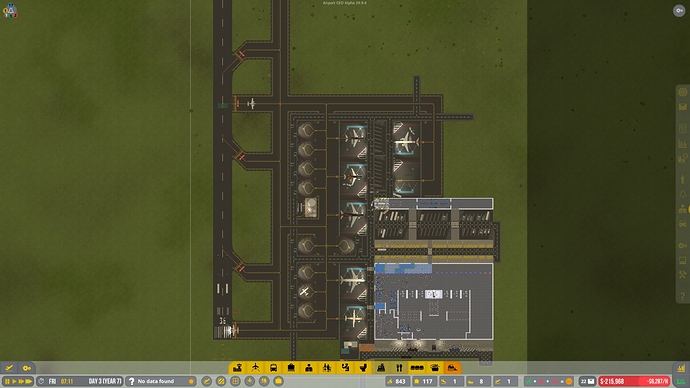 First and most annoying, my ramp agents kept getting stuck at the remote stands. The service car would bring them to the stand, they do what they should and the service car would come to pick them up everything as it should work. However every other time one of the agents would be left behind and just stand at the pick up area. After a while I would have to fire my Agents and reject their applications to get rid of all of them and then spawn in new ones, whichmake the process work as intended until I would need to do the fireing thing again.

(more images but apparently I’m not allowed to)

Second, unfortunately I don’t have a picture of it, on rare occasions a Gate Bus would simply not enter the Bus bay even if it was empty, until I dismissed the flight it was assigend to.

Traffic: While my traffic setup was certainly not the most efficient, it shouldn’t warrant the kind of chaos it caused. At times my flights ended up 6 or 7 hours late because every vehicle in the airport drove circles without actually going where they were supposed to.

(seems I don’t have a picture of that either)

Ultimately, I would simply prefer if ground vehicles ignored each other except when they need to park or pick up people somewhere, which brings me to:

Remote Bus Stops: While the concept is awesome and I love it, there are a few problems with it, sometimes the bus sent to pick up passengers would arrive before the one dropping them off, which would block the road for a significant time, delaying the rest of the airport.

Additionally, even if loading worked as expected, most planes would end up delayed because loading simply took to long, even with two boarding desks people would line up at the bus stop waiting to enter the bus. (see above) Interestingly, passengers coming into the airport enter the bus at the gate at enormous speed. So either boarding needs to start earlier or passengers need to board the bus faster.

Finally, Security Shifts: Generally security would work as intended, however every once in a while Security Guards would leave their post and passengers wait for the replacement guards and normally after they arrived they would work on as before. However once or twice that process broke down and even after the replacement arrived passengers would keep waiting. Personally I would prefer guards stay at their post until their replacement arrives to keep operations smooth.