The afternoon of Friday, May 22, 2020 was the date of this horrific crash. Of the ninety nine people onboard, only two survived. Eight people on the ground were injured, and destroying/damaging twenty homes. The aircraft was an A320.

There is not much for me to say but I give my heart out to all those affected by the crash.

So I will post some links to where you can find more information: Pakistan plane crash survivor: 'All I could see was fire' | Pakistan International Airlines Flight 8303 - Wikipedia | Bodies Pulled from Rubble After Deadly Karachi Plane Crash Kills 107 - YouTube |

Airbus has now decided to comment on the crash. I couldn’t find what they commented on, so please let me know.

Do to social distancing measures, the A320 was not at full capacity, which could have lead to a greater loss of life.

Thank you for reading this story.

It was indeed a sad day for aviation.

Some interesting commentary on the accident here, from an experienced A320 pilot:

Wow. Thanks for sharing. Indeed some interesting facts.

I’m no aircraft genius with flying, but it almost looks like they stalled it…

So from what I’d heard (been told) the landing gear was not deployed on first touchdown. Engines contacted the ground 3x before the captain did a go around. Because of the contact, engines were damaged, and aircraft didn’t have the power to continue flying. Then as seen in the video, the aircraft essentially “stalled” as it couldn’t climb, and went down…

It’s a shame. All family of this incident are in my thoughts.

I just found a very well made video on this by TheFlightChannel on the incident. One of my favorite aviation related youtube channels, so here you go:

oh i didn’t hear about this crash ( why does such things happen ?

where there children on the board?

I am an airline pilot myself and as such I am usually very careful to say things like that, but if that reconstruction is anywhere close to reality then such things happen because apparently both pilots were absolute numbnuts and it really is a miracle to me that they managed not to crash a plane before. Attempting a belly landing without telling ATC, without taking any precautions, without any troubleshooting such as a low pass to let the tower confirm whether or not the gear is down if cockpit indications are not clear and out of an approach that was clearly unstable , because the aircraft was way too high, leaves me speechless. Executing a missed approach after both engines contacted the ground is simply suicidal and - not surprising - both engines failed during that attempt. Absolutely shocking to see as someone who knows what’s going on. Everyone should be very careful to take a flight with airlines from thrid world countries as I’m certain, this is not an exceptional case of a badly trained flight crew.

I read that many pilots in Pakistan have fake pilot licenses, which could explain very unprofessional behaviour you pointed out. Let’s hope their government will sort it out and allow honest pilots to fly again. 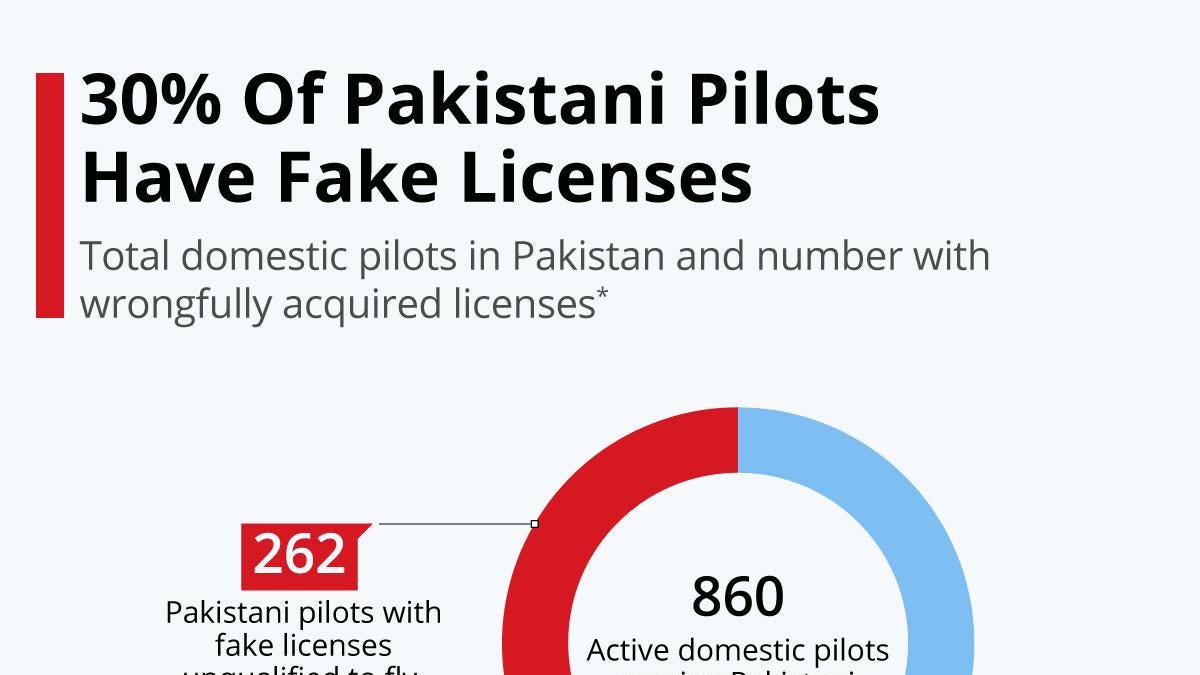 Pakistani Aviation Minister Ghulam Sarwar Khan has revealed that more than 260 of the country’s civilian pilots paid someone else to sit their exams and are unqualified to fly.

So there was collusion involved. I do hope that the government fixes this issue, but this should be an international issue. As PIA does fly domestically, as well as internationally. The fact that 30% of their pilots are able to skip exams that ensure the safety of passengers and crew, just for some money makes this a bigger problem in my opinion.
EDIT: Okay, so I just read some more and it was only domestic collusion, but even still, this is a big issue.

The license issue, whether or not it is applicable to this case, doesn’t even bother me that much. According to various sources, the pilot in command had 18.000 hours total flight experience and 4.000 hours on the A320. I doubt that pilots from all over the world with similar experience remember much from their initial pilot training. What matters at this stage is the recurrent simulator training. In the western world anyone performing like these guys would have been grounded. But unfortunately in some shitty parts of the world the safety culture is shitty as well due to their culture in general.

Wow, that is absolutely absurd. I just did some quick math, (Totally did NOT use Google) and that is 375x less than what would be required in the USA. For the A320 of course.