The problem
So I set up an airport with plenty of check in desks and security stations, as I was under the impression that this would improve PAX flow throughout my terminal. However, PAX are stupid have basic pathfinding AI due to performance concerns, and do not seem to have the ability to select the security station with the shortest queue (as most normal people would do IRL). This leads to weird behaviour around shift changes, as while the security guards are changing shift, the security station temporarily shuts down, before restarting. What then happens is something like this: 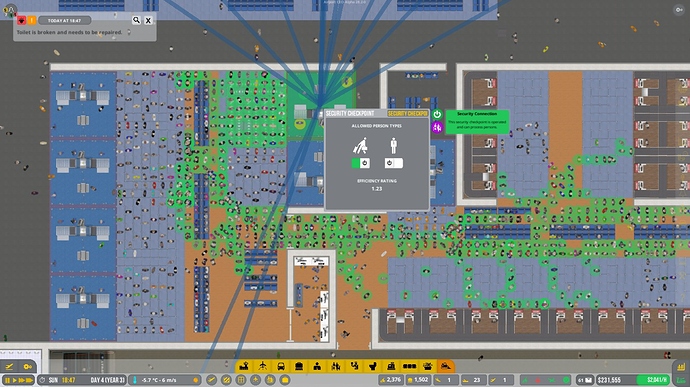 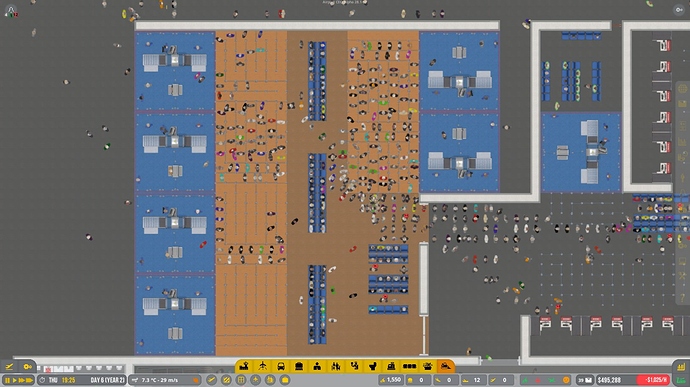 Root cause of this issue
PAX, once they are in a queue, will never consider leaving said queue to go to another security station, even if it makes their journey much quicker (as demonstrated above). IRL, people waiting in extraordinarily long queues will always be on the lookout for other stations that have a much shorter queue.

Possible solutions
This isn’t easy without melting the player’s processor. There are around 2000 PAX in my medium sized airport, and other players have been able to make much larger airports with more complex layouts. This means that if every single PAX that was in a queue was constantly re-evaluating their current path and comparing this to other possible routes through other security stations, we would end up in a situation where so much processing power will be used for pathfinding the minimum requirements for this game would be a supercomputer. So we need a slightly less impossible alternative.

One Idea ive had would change how queues work altogether. Heres how it could work:

-PAX will never enter a queue if there is not enough room. Right now, PAX will simply join the back of the queue, which sometimes leads to massive queues around the entire airport. This means players actually have to give some thought to how they construct their queues (right now this isn’t really that important).

-If all available security stations are full, PAX will simply sit on seats (if available) or just stand around.

-If one security station is available, PAX will obviously go to that.

-If more than one is available, then things get a bit complicated. PAX should choose the station with the smallest queue, but equally they shouldn’t be travelling halfway across the terminal to get there. This means we need to find a way for PAX to balance distance vs number of PAX in the queue. One way is by counting the number of PAX in a queue for one station and adding that to the distance to get there to get a sort of ‘time score’. The stand with the lowest score is the one that the PAX will go to (maybe this calculation needs some fancy multiplication or whatever to fine tune things for optimal flow).

TLDR
PAX are not particularly intelligent which causes a lot of traffic problems in the airport, but making them ‘smart’ will take too much processing power. So we need to find a way to improve this without requiring everyone to have a supercomputer in their basement because then I will have nowhere to grow my weed.

Side note
I’ve observed similar behaviour with check in desks on medium flights. PAX will all go to the nearest one, leaving that one flooded with people and the other one empty, which is far from optimal.

best solution for this would be to have a common queue for x amount of security stations. so when a slot is free at the security point it will feed from the main queue. I did make a feature request for these, so fingers crossed in the next round!

Was thinking about this as well. It would be more efficient, and I believe its the setup used at some airports. Also has the added bonus of being relatively compatible with the current PAX AI.

But in the meantime i’ll take your advice and keep my fingers crossed!

Spread the flights, to get rid of peak times.

It would be nice if we could pretemplate such schedules and have the autoplanner fill them. 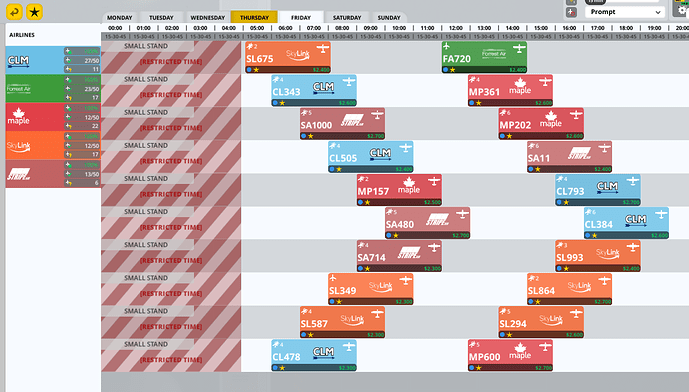 Tried this and it does work…but doing it on an airport with 30+ stands? I’d be stuck in front of my PC forever. Like you said, I wish there was a way to program this into the auto scheduler, so I don’t end up with swarming of my airport followed by long periods of emptiness.

It gets tedious over time indeed, but I found that 30 stands was still doable. Having fun @ your airport is another story though.