I’m encountering a strange issue, possibly due to pathfinding, when using 2 boarding desks for a single stand. In the screenshot below, the passenger will walk through bottom of the left hand boarding desk, then the wrong way through the top side of the right hand boarding desk, before pausing for a while (sometime up to 15-20 game minutes) before interacting with the top side of the right hand desk (apologies for the crudely drawn arrow) 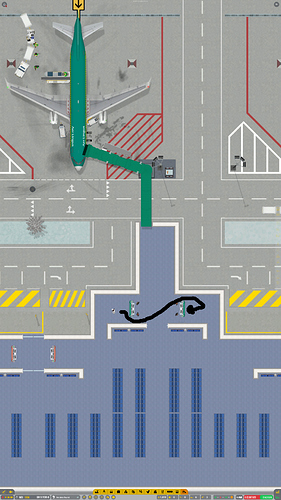 It’s weird that a passenger will happily walk through a staffed boarding desk (whilst boarding is open) in order to reach another one, whilst also pausing for such a long time.

Due to the positioning of my boarding desks and walls, I find that passengers will walk the wrong way through them, then all occupy a single grid tile in from of the desk (see below) rather than queuing as normal. In the case below you also get a queue of passengers which doesn’t move because of all the people adding to the mass on the single tile. 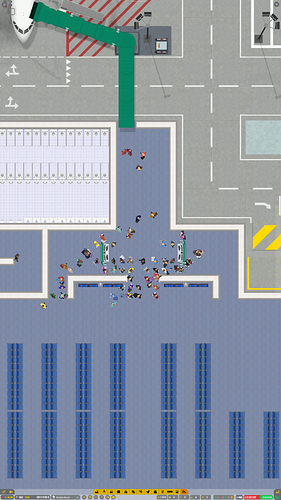 It would make sense to only allow passengers to pass one way through a boarding desks, since their purpose is to be able to control the flow of people onto the aircraft. It would also prevent the above issues occurring.

Have other people found similar issues?

That’s because all passengers default to one desk (perhaps the first one open?) and then if there is a wait, their pathfinding tells them to go to the other desk. I think it was designed like this because most airports will have two desks right next to each other, and with that kind of pathfinding mechanism, it looks loess cluttered in that type of a layout.

I agree about the reason why they do so, nevertheless it’s weird.

If you try to pass a boarding desk IRL to reach another one, you’ll get into some bad troubles…

So boarding desks should at least be one-way, of course. Or better, passing should be only possible for boarding, not for just walking through…