Airline Description: Patagonia Airways is a small airline that started on the 50s with a couple Cessna Caravan offering flights between small towns located in the argentinian Patagonia. Time went by and the company got bigger, purchasing some Twin Otter and expanding their operations to the rest of South America.

Today it offers cheap flights, operating a wide variety of routes and airplanes from some small Cessna and Twin Otter to some bigger single aisle ones. 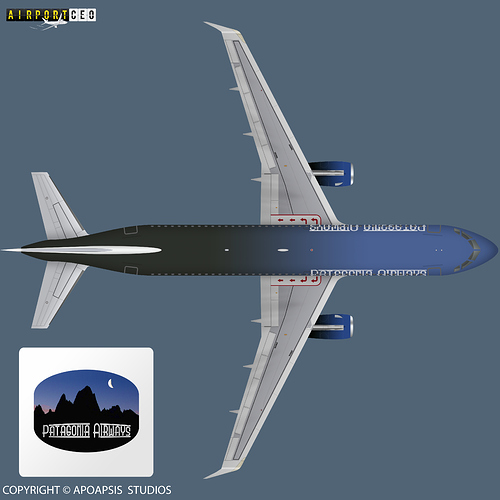 I would like it better if it didn’t have the mountains on the side. Nice submission though.

Thanks for the comment! I was struggling with myself between having or not those mountains, I’ll try to upload it without them so you can check both liveries.

I gotta say this design looks cool. The choosen color pattern is smart; not ridiculous but also not too complicated. The writing looks nice, at first I though it was another language but then I get it when I look at logo which is actually a good thing. It feels like it is a native but big airline.

Although I would say design without mountains look good enough. Good work man

Thanks mate! Really appreciate your words!!

Livery 2 is definitely better, both are very good though. So far my favorite.

Thanks! Really means a lot how everyone is liking and helping with this design

So do you choose which design you would use? Of course I am not trying to update an old design contestor which I liked its design

I think I´m gonna stick with the cleaner and simpler style as it´s easy to recognize, not difficult to render and I think that it will be very simple to adapt for other airplane models.

Nice design, I wanted to add that you need to shorten the length of the airline description should be 450 Characters, not words. Including blank spaces

Fixed it! Thanks for the feedback mate