I would like to share my latest Airport venture in the making with you. It’s about half built by now, future plans are still pending. 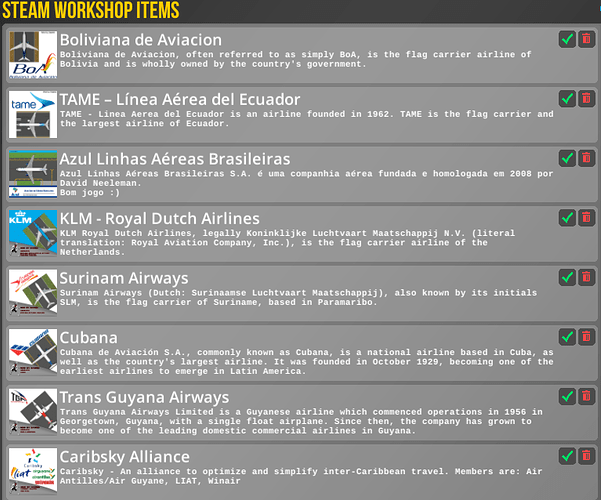 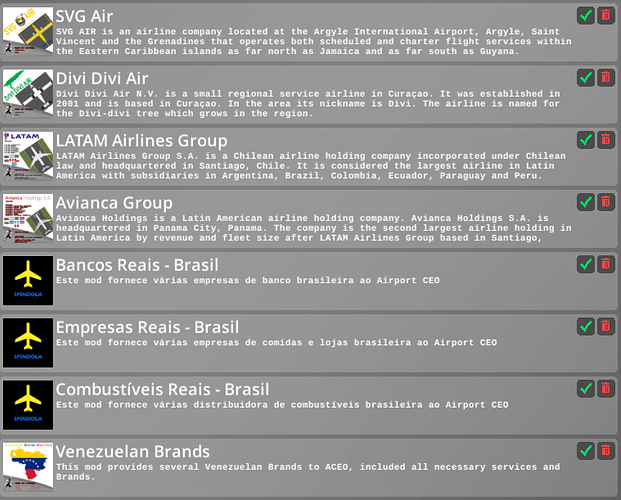 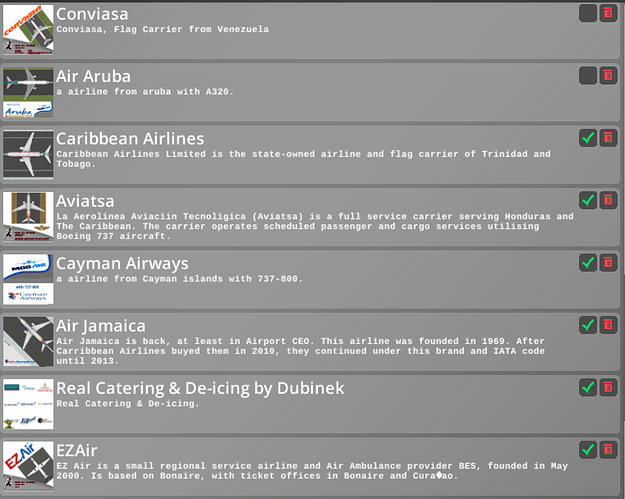 Custommodes4764×376 75.6 KB
80% passanger per flight ratio
1 GA stand
7 small stands
20 medium stands (28 when complete)
6 large stands (15 when complete)
1 small runway
4 medium runways (2 landing, 2 take off, depending on necessity maybe a third take off runway)
1 big runway (when complete 2 large runways, 1 for landing + for take off)
The airport streches from Level -2 to Level +1
It’s divided in 2 Terminals east and west.
The east terminal contains the gategroups A, B and future C
The west terminal contains the gate groupd D and future E

The Airport is constructed so that the planes land in the southern portion, move towards the center i.e. towards thier stands. When the planes have gotten serviced and boarded they move to the central taxiway which brings them to the northern part of the airport where the take off runways start. 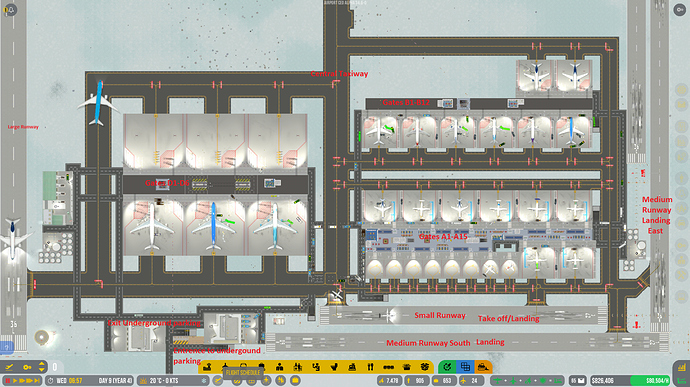 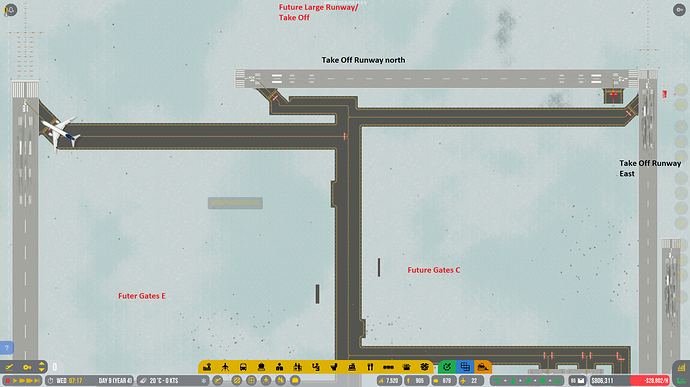 NorthernHalf1919×1079 635 KB
The northeren half is where the future gates are supposed to get built. On the east side come the C gates (3 large, 8 medium stands), on the west side come the E gates wich will be a mirror image of the D Group.
Also the planned large take off runway will be placed in a horizotal position at the very top of the airport zone. The position of the horizontal medium take off runway is not yet devinitive.
Right up until building the big bird terminal, the aiport functioned very good. But as i have extensively lamented on several occasions

, now due to ineffective public trnsport very few passengers arrive at the Airport - which kinda sucks…

Specifics:
On Level -2 i’ve located the baggage sorting. There are 2 separate Systems for the east and west terminals. Each security System has a staffroom for security officers and a staffrestroom.
The corridor in the south is a Connection between the security zones of both terminals. In the future it will only serve as a staffzone, the passangerconection will be done by skybridges. 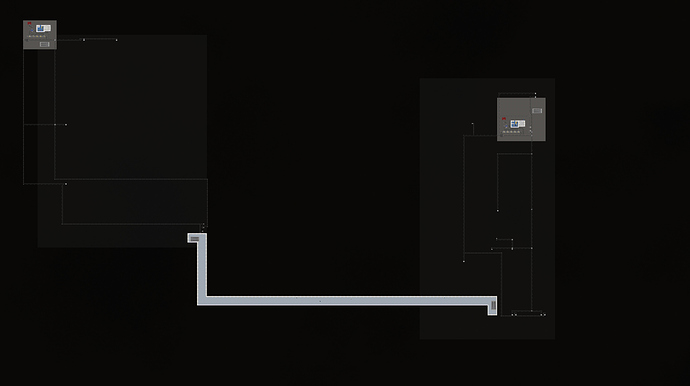 Here is an overview of the -1 Level. Situated in the middle ist the parking and drop off area. On both sides correspondinlgy the east an west terminal. 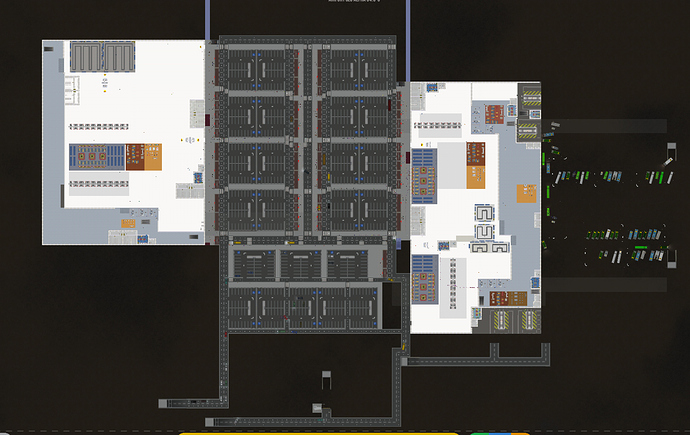 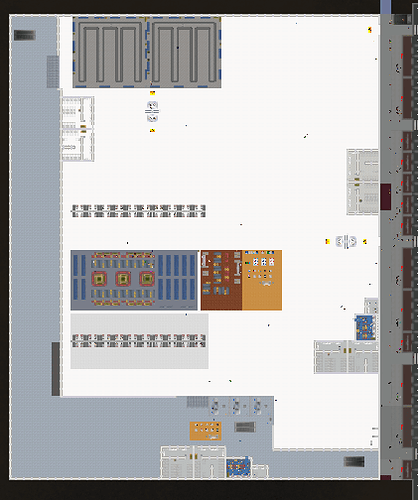 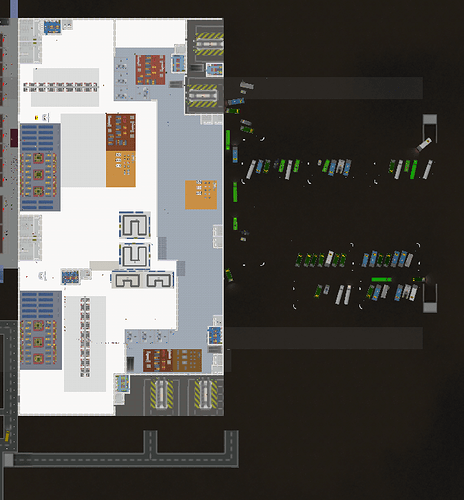 Gate Group A harbours the small stands and GA stand as well as medium stands for propeller planes and CRJ 200/800. There for it only serves local flights.
As you might have noticed the whole passanger Service including check in, shopping, Restaurants and security happens for all Gate groups on level -1. 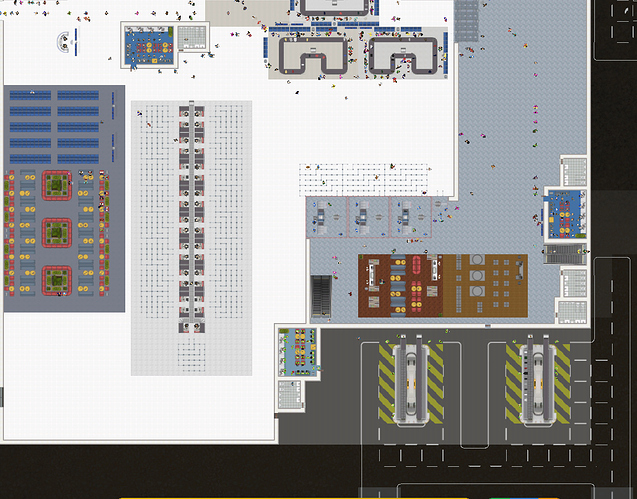 level-1eastTerminalAgates1149×901 429 KB
The ground floor serves for boarding and debording. 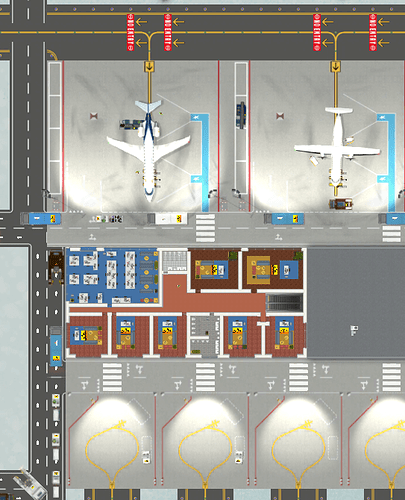 Gate Group B Services larger medium planes and has jetways. 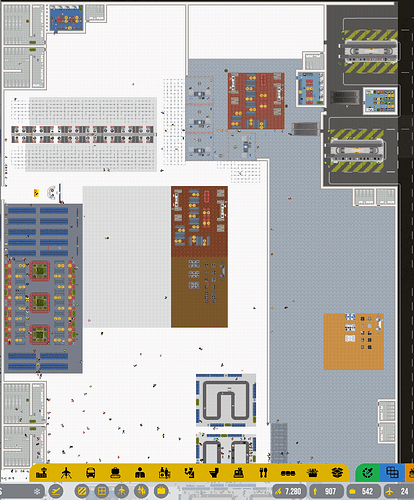 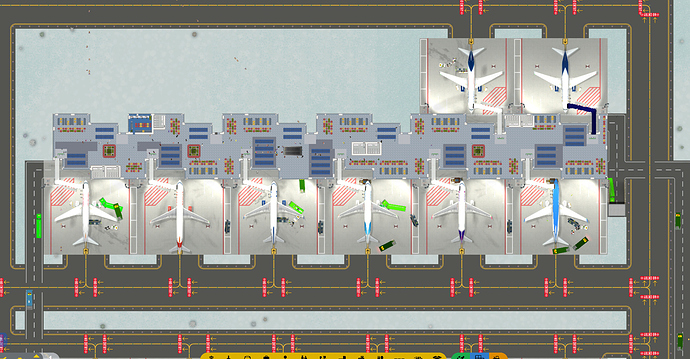 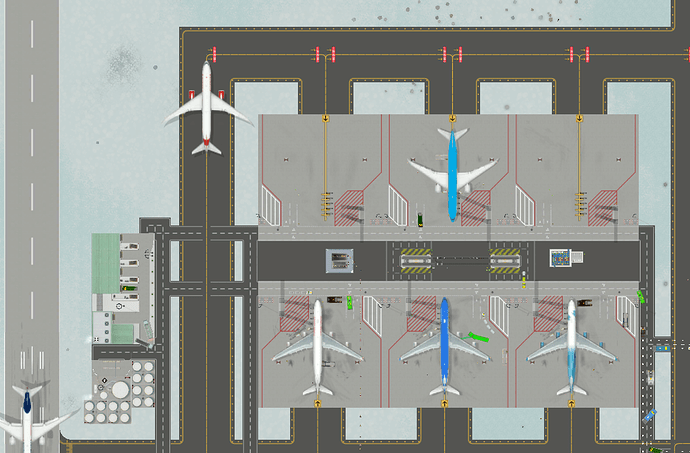 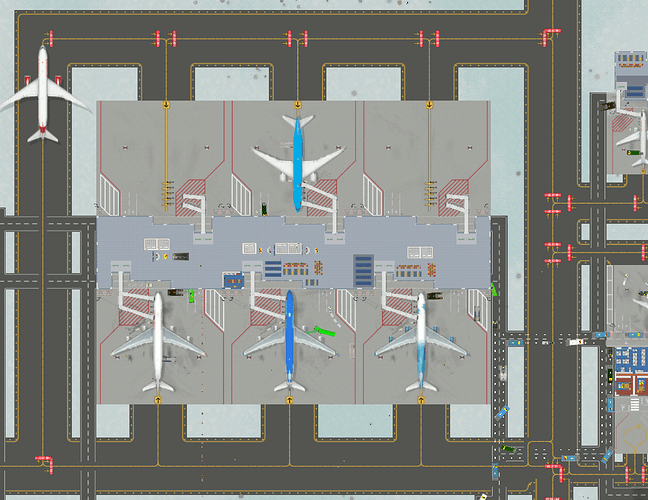 thanx and am looking Forward to your comments and suggestions

Why are your gates a different color pavement to your taxiways?

I was following the Logic that concrete is more stable and is used for Standing planes and asphalt Is netter for moving planes.

uhh nice build, and nice to see a lot of my mods in action!

Thanx! Means a lot coming from an ACEO veteran