Short introduction, I’m new to this and still learning the mechanic of this game. But so far i love this game.

Since the new large size in experimental verions, i’ve been experimenting with the layout design, there are a lot of fails, but finaly i found the best one so far. I’m using the rules of taxiway buffer (from this topic), so the wings wont touch buildings and other aircrafts while parking or taxiing. The goal is to make the airport as realistic as possible. While also make the aesthetic as good as possible.

So this airport located near my house, but the real location is fictional. Inspired by Soekarno-Hatta International Airport in Jakarta, i make the domestic terminal rounded with parkings and controll tower in the middle. 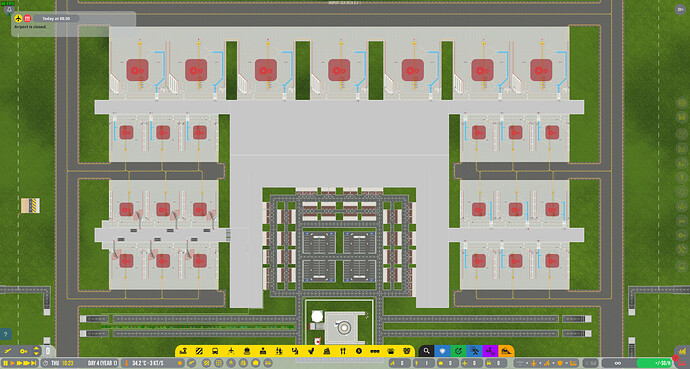 Its been couple of days, as i play this game everynight after works but with little progress i guess this is the time to give an update to you guys

So i’ve been working on the lighting and some details of the car/taxi or busses stops, as this is the only place where the stops for arrival and departure in domestic terminal, i think it would be nice for the pax to have a lot of lights and some trees. I’m thinking there will be a lot of people in this area, crossing the road and waiting for their transport.

After paying attention to the public transport stops, i try to design the check-in desks. From what i learned, its always easier to design this first before anything else, it give you better managing pax flow.

For this i learned a lot from awtkn design, his airport really controll the flow of pax very efficient.

Thats the reason why i put my check-ins desk on floor 1 and baggage claim on the ground floor just behind the exit, so arrival (tired pax) travel the less amount of distance while departure pax usualy fresh and arrive hours before departure time dont get bunched up with the arrival pax (i hope

And also i made the security check point sparated for the staff, so they dont get in a long que.

By the way you might ask why theres a big room and have staff zone only behind the wall after security. Thats because the space will be use for the offices. After the pax goes into security checkpoints, they will go upstairs through the escalator on each sides to the waiting room, this also why i make 2 escalator from the jetway each going from floor 2 and down to ground floor, so the pax actualy using the floor 1 only for check-in and security, and there would be some stores up on floor 2.

Well thats all the time i had to work on this airport. Next update i will add toiles and works on the baggage proses down on -1 floor.

nice @faandean. looks good. also for smaller stands you need 1-2 buffer (which I updated) for the SAAB aircraft cuz they are so much bigger with the wing span!! But looks great! Keep it up!

Thank you, i just about to give an update. I’m using 3 buffer for medium and 4 for heavy thanks to your guide

however i dont know if i’m going to add small stand as there will be more heavy for international terminal, the rest of empty space i will use for maintenance hanggar and utilities.

Sounds good, i will try to find space for it after adding emergency respond and maintenance hanggar. Since its a Sandbox, i might cheat to add more room by editing the world size hahaha.

Sory for the slow update, i’ve been busy with my work lately.

So in this update, i finished the baggage handling proces, all the floors, staff rooms, toilets, underground parking etc.

So this is located on the -1 Floor, this is all the baggage handling for Domestic terminal, i actualy dont know if the arriving bags need to pass security or not. But i tried to make this system as simple as possible.

The picture above is a baggage claim area, all bags from 25 gates will go to this 8 baggage claims. there are 2 sets of toilets and a lot of sofas

Now this is the executive rooms, located on the north side floor 1 of the terminal. All the office are duplicated and i put 2 meeting rooms. The security check on the bottom left of the picture are for staff only.

This is the offices for administrator and passenger services. located on the 1st floor of the south side.

This airport is lmost operational, as soon as i finish the stores and restaurants, i can buy and orginize vehicle also recruit staff. Then i will put this save on the workshop

So this is located on the -1 Floor, this is all the baggage handling for Domestic terminal, i actualy dont know if the arriving bags need to pass security or not. But i tried to make this system as simple as possible.

they do need baggage security