Operation: Mad Dog, The Hunt For The Trijet (ORC)

So I have a problem, I am apparently incapable of growing an airport. It’s not that I don’t know how, at almost 150 hours logged I feel like I have a fairly good grasp of how the game works. The problem is that I’ll grow an airport from nothing to just about the point of adding medium gates… and then I’ll wonder if a different starting design might be a better option and I start completely over. What’s more frustrating is that for months now my all time favorite commercial jet has been in the game but has yet to grace my airport with its presence, the MD-11.

So here’s what we’re going to do, this forum is going to keep me honest. I’m going to start a project journal of semi-periodic updates with end goal of having an MD-11 successfully arrive and depart from The Reef (ORC).

I am also setting a few rules that I must abide by:

So! Keeping that in mind here is what I’m starting with: 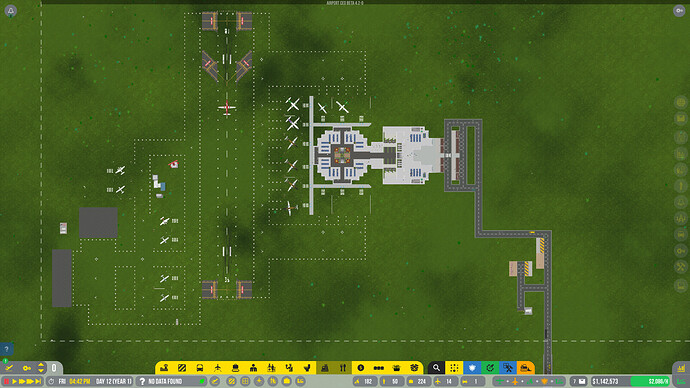 I started on easy mode because why make things harder than they need to be and picked the location of the Florida Keys due to do their proximity to all the Caribbean nations. I also turned on the “Realistic International Flight” setting to best utilize that location. More on my plans for that later.

For the GA area I’ve very loosely based it on the Signature FBO at HSV that I frequent for work. Eventually GA will have its own designated runway above the area but in the meantime it needs to share with Commercial. The towers and radar are in temp locations for the moment. I just wanted something for now to get up and running. 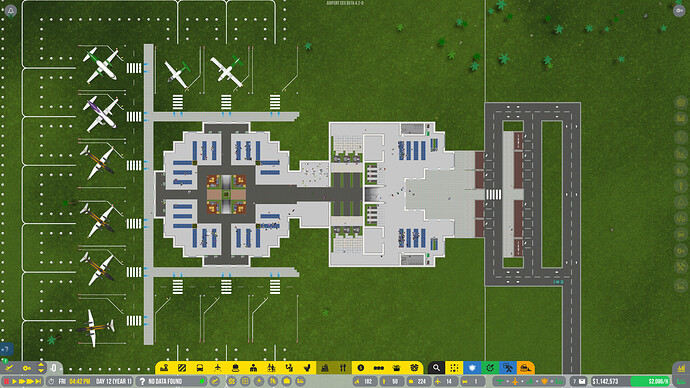 I didn’t base the first terminal off of any pre-existing design but due to its similar round shape to Concourse E of my home airport (MKE), it shall now be known as Terminal E. Based on previous experiences I’ve found that 12 small gates is a good base to start with and grow money from. I also wanted to utilize side walk as much as I could as to prevent the terminal from being huge. The pickup/dropoff is also only temporary. It’ll depend a little on how the other terminals are laid out but a multi-floor set up is probably the best option. Speaking of multifoor! 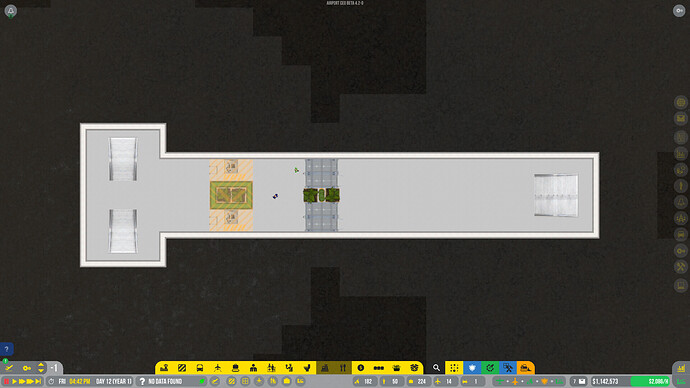 For better passenger flow I opted for an "in from the top, out from the bottom strategy. Eventually bathrooms, baggage claim, staff room, and a staff security checkpoint will be down there as well. Also note the customs desk! Like I said before, one of the nice things about being in the Key’s is being close to all the island nations in the Caribbean. Given a lot of those islands are serviced by puddle jumpers IRL, it seemed appropriate to set some of the 12 stands to be international. People of Havana rejoice!

So that’s where we’re starting! Next steps are going to be add in the other small aircraft turnaround services, implement the international aspect, and double down on decorations and styling. Should be a fun journey!

Hmmm. I tend to keep GA in a separate area (which I see you are) and make that and my small stand terminal area a lot more compact; the profit margins on GA and small commercial operations isn’t worth the expenditure on a large sprawling terminal and facilities area to support them. I also do not space out the different areas as much. Despite the new two areas we can build on, land purchase is very expensive and can kill cash flow in the early game. The game is more oriented on realistic operation rather than realistic design.

The funds then kept are more useful in developing medium aircraft operations and the add-on facilities that bring in the big bucks. The space saving means that the second land parcel can be bought later in the build, saving that expenditure for when you are quickly building profits or are more able to support taking out a loan to purchase it.

I also build 3-4 medium stands onto the initial terminal so the (small/medium) airlines I contract with can use them before building a second terminal, which I then populate with the airlines offering medium/large flights. This also makes the baggage handling which you have to build in the small terminal more useful and more fully utilised.

Putting the Transit zone underground on Level -1 saves space on Level 0 for things that can’t be built on any floor apart from Level 0.

I believe you to be correct on all accounts however most of this is what I was referring to on my “min-maxing” point. I recognize full well that from a cost and space standpoint I could be much more efficient however I wanted to take a more realistic approach to the layout while understanding it might not be how the game is optimized.

Take the separate GA and commercial areas for example. While I can’t speak for outside of North America, I can say that in most cases around where this airport is located there is a distinct separation of GA and commercial buildings which is why I’ve done as such here. Often you’ll see FBO’s on the opposite side of runways from the commercial area. Additionally I could significantly reduce the space required for the 12 commercial stands and save a lot in terms of operating cost however the current setup still generates money at a steady pace (as well as increase after adding fuel and baggage) and the size isn’t so big that it will impede future planning. I’m not going for a speed run to an MD-11 so I don’t mind being methodic about getting there.

I do agree with your points on a adding a few medium stands to the first terminal as well as having the transit zone be underground and plan on doing something in those realms as things grow later down the line.

So turns out “holiday fun” + “planning a wedding” + “still traveling for work in a ****ing pandemic” equals not a lot of time for AirportCEOing which is why it’s now two months later but I haz update!

Things are going well at The Reef and I have a whole bunch of progress to show! 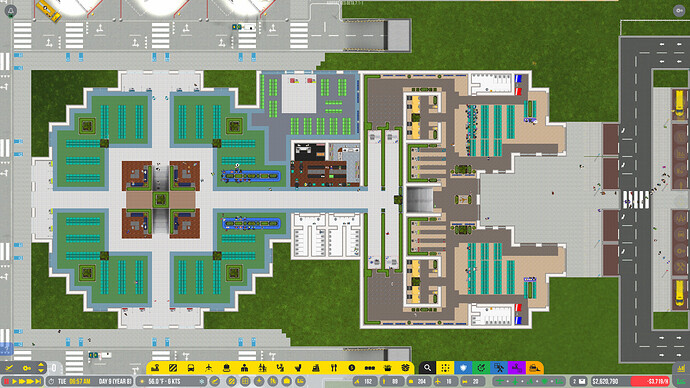 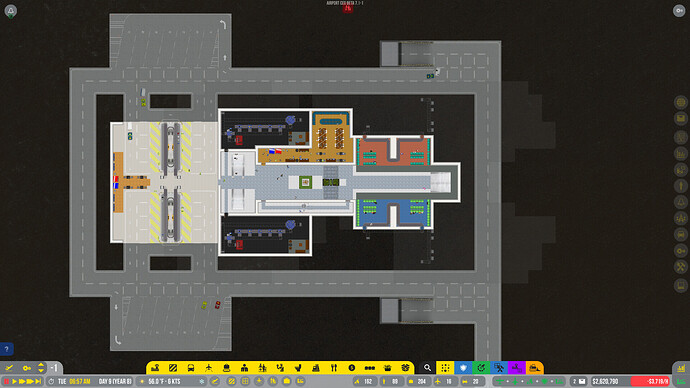 First things first, the terminal has gone through a lot. Baggage is the biggest improvement with the automated bag drops and full security however a few shops also made it in as well as all the painting and decorating I forced myself to do. Given this is located in the Caribbean I figure it was a necessity to use a lot of blues and greens for a color pallet. The other thing worth pointing out is staff rooms. There’s the big one adjacent to the security exits however I was also able to utilize space in the baggage bay room and scanner rooms for baggage handler and security officer break rooms. More for form over function but I thought it a nice touch. 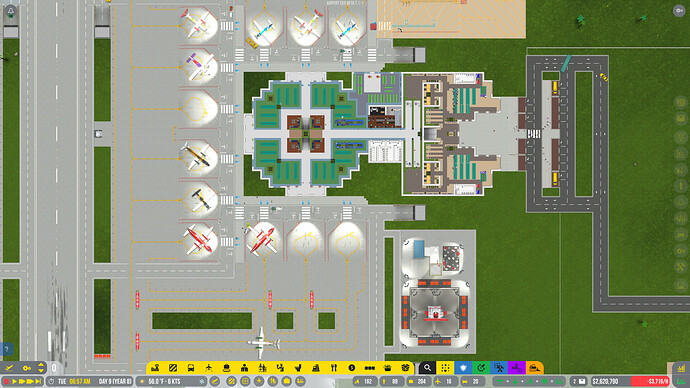 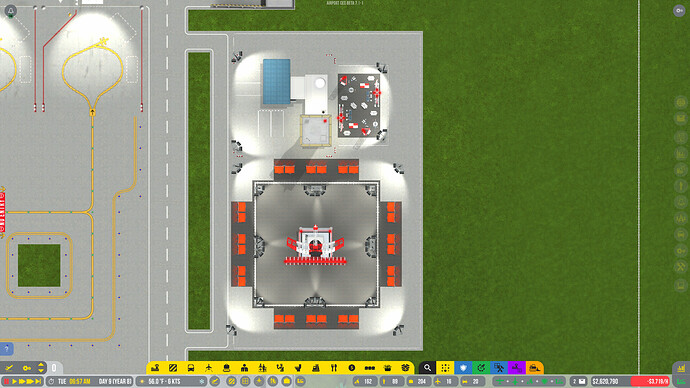 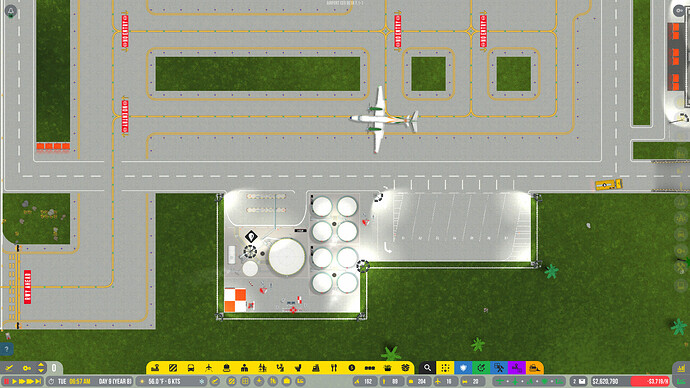 Next is all the ramp details. Most of it was simply upgrading everything to concrete (thank you hourly cost savings) however I also put in some effort making the tower, radar, and A1 fuel zone looks nice. Also it was a tight fit but I was able to drop PAPI light in the (mostly) correct spots off the runways. 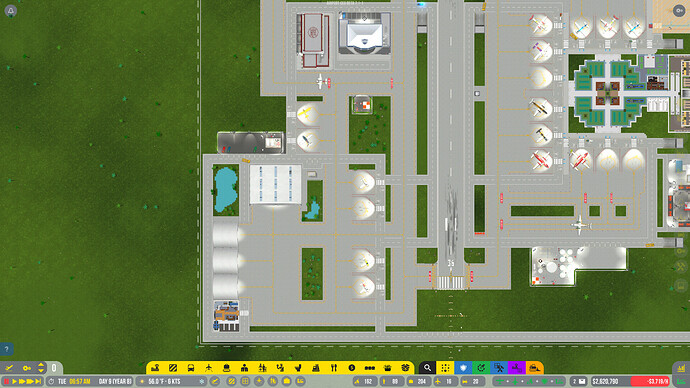 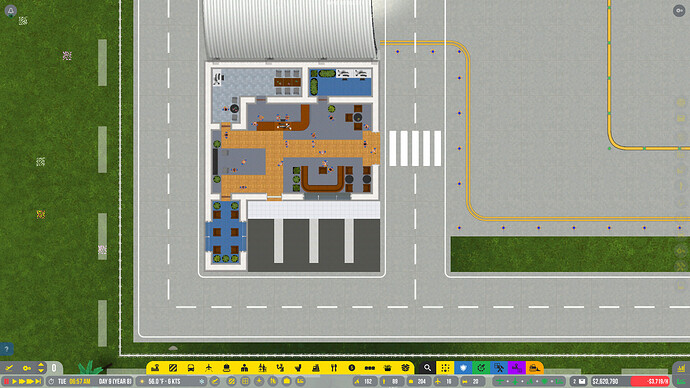 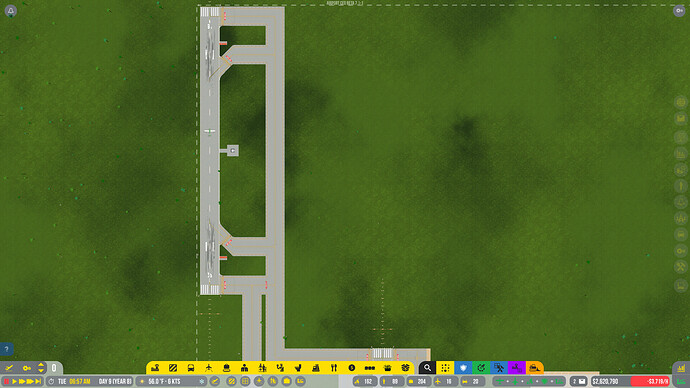 Moving to GA, we got fancy! All the hangers went in as planned, AvGas zone got cleaned up, a little detail work here and there, and then my personal favorite: a rough replica of HSV’s Signature FBO that doubles as a Contractor staff room. I’m willing to bet I’m the only one on this forum who has been to this particular FBO only because of how obscure it is so you all will just have to trust me, it ended up being a surprisingly good replica/homage. Lastly, I had to make a GA only runway for flow reasons. Things started getting too backed up when there was only one. 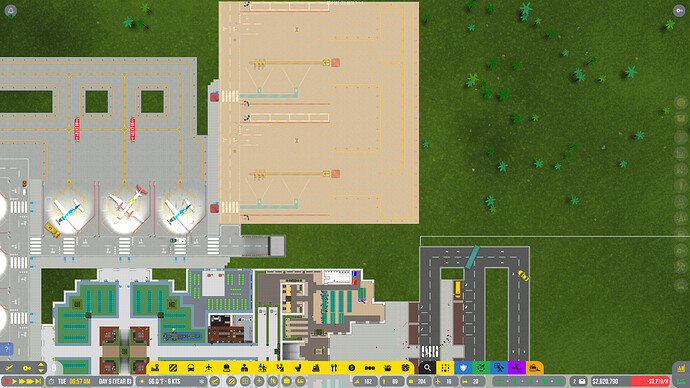 Moving towards what’s next, the biggest thing is adding a few medium stands to the first terminal before moving to the second medium/large stand terminal. Additionally I’ll need to revamp the parking and pickup/dropoff area so that it’s prepared for what with be a massive influx of pax. All in all though I’m happy with the progress so far and with any luck we’ll be landing trijets in no time!