*Disclaimer: I added “budget airliner” to the title because it needs to be 10 characters long

Airline Description: OneAir is a budget airliner, which focusses on short flights at low cost. OneAir flies mostly to nearby countries but sometimes does domesticated flights aswell. Luxury and comfort aren’t our biggest selling point. Reliability however, is. 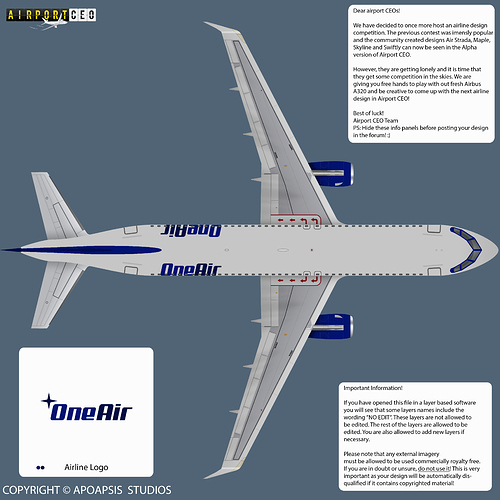 Nice simplistic design! I really like the blue around the cockpit windows!

The body is paited to grey or it was default color of template?

I made it light grey indeed. The (old) Skyteam livery was my inspiration for the colors.

I dig the simple approach on this. Also the name on the tail end is something that stays in mind (at least in mine).

Thanks! Simplicity was something I was aiming for.