I think it would be a good idea to implement a one way feature into the taxiway nodes. This would mean that you could assign sections of taxiway into one direction, helping the flow of aircraft around the airport.

Devs said they will work on aircraft path finding so one way taxiways won’t even be necessary.

Nah. An airport that requires one way taxiways isn’t too relisic. Aircraft go all over the place getting between the runway and the gate. My only hope is that the devs make atc pathfinding super intelligent so there are no crashes.

Crashes AND aircrafts that are unnecessarily waiting other aircrafts.

Swiftly HEAVY, please hold for the Cessna lining up on the runway before commencing pusback.

I suppose there’s no harm in implementing it, no one would force you to use it

But I do agree that the pathfinding should be sufficiently intelligent that you don’t need it to run your airport efficiently. I personally wouldn’t have them in my airport as @Henry747 said, it’s not particularly realistic.

What if I just want to build efficient, and not realistic?

Well as I said, I don’t see any harm in implementing it since no one is forced to use it and it provides more options. However, I would expect that pathfinding be intelligent enough without it. I.e. one way taxiways should be an option but not a necessity in my opinion.

Thats what I am trying to say. That other airport game requires one way taxiways because their pathfinding isn’t great. Intelligent pathfinding could really put ACEO above the competition.

In my opinion, and only my opinion, one way taxiway implementation acknowledges the fact that there are issues with pathfinding that need to be fixed.

Therefore I think that time spent implementing this feature could be better spent making the pathfinding more intelligent so that this feature is not needed or wanted by the community.

Sure, it might be a short term fix as they work on pathfinding, but in the long run, ACEO shouldn’t become reliant of this (Which is my biggest concern). I also don’t want two airport games that mirror each other. 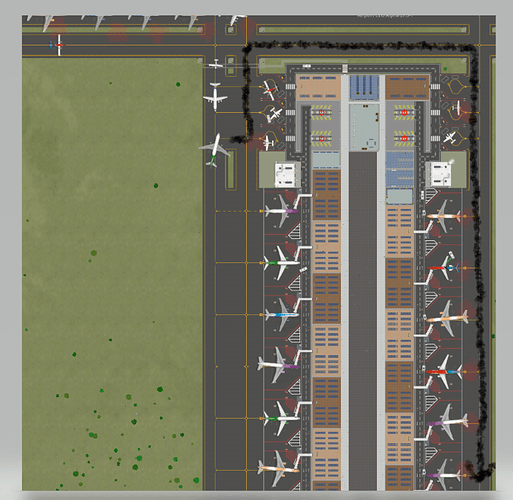 Example to show the reason; here you halve an airport waiting on a departing plane, if I had one way taxiroads, the traffic system would be much more efficient.

If not taxiways, give me traffic boxes, so, I can limit airport traffic exposure on block by block basis, like on train tracks.