Hi all!
I have another problem with pathfinding.
At the moment I am rebuilding my airport. A small terminal (below the picture) is gradually being deactivated and a new, larger one is being rebuilt.
Now I have the problem that arriving passengers get off the plane, go down an escalator, go through the security exit towards the new terminal and exit to the buses. 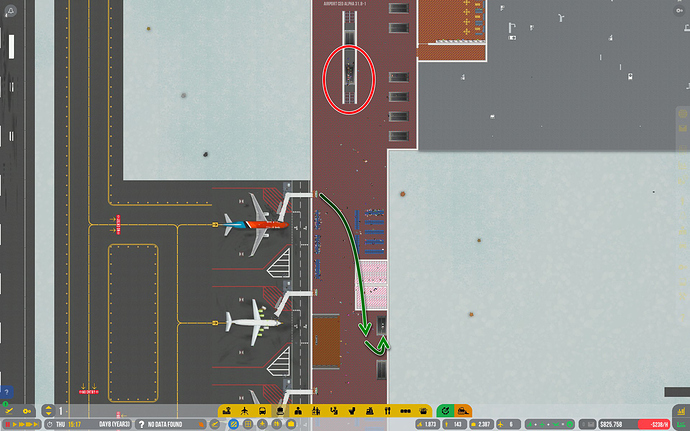 But on the way there they go up an escalator again and directly down again. All! 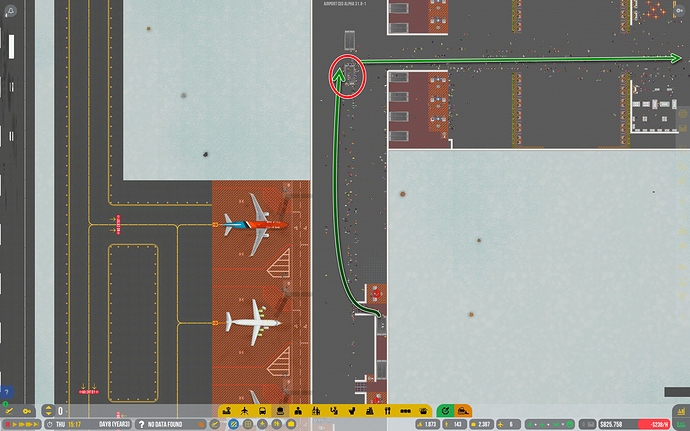 Do I have a mistake in the walkway design or is that a bug too?
(save & reload had no effect)

Get rid of the secure exit in the second screen shot and then the only way out will be the top one?

Right now I’m in a kind of move from the small old terminal to the big new one (that’s my own challenge - not losing a flight or PAX while I’m moving). Later all exits should be like the upper one: on floor +1 the security exit with directly following escalator and no security zone on floor 0. I need several escalators as exit, because I want to build the baggage claims on floor 0 close to the gates.
Therefore, I am afraid that the arriving passengers cause a mess because they go completely superfluous ways. At the moment I have only 6 stands, planned are 36 …

Any agent, (staff or pax) not walking the shortest path possible is a bug, as it isn’t intended to be.

Nevertheless, arriving pax are uncritical, as it doesn’t matter how long it takes them to catch baggage and to leave.
Arriving pax usually can’t block anything that departing pax need.
So even if it sometimes looks very crowded, there won’t be any mess because of a crossing of arriving and departing pax…

I’ve tried out some things in the last days with the savegame of the screenshot above and older ones. Today, after the 4th or 5th reload of this savegame, it works correctly from the first second. Not one passenger is going up and directly down the escalator

But the main problem I think, is the wrong pathfinding of objects.

Some game-days earlier, there was still a wall between the newer (at the top) and the older part (at the bottom) of my terminal on both floors: 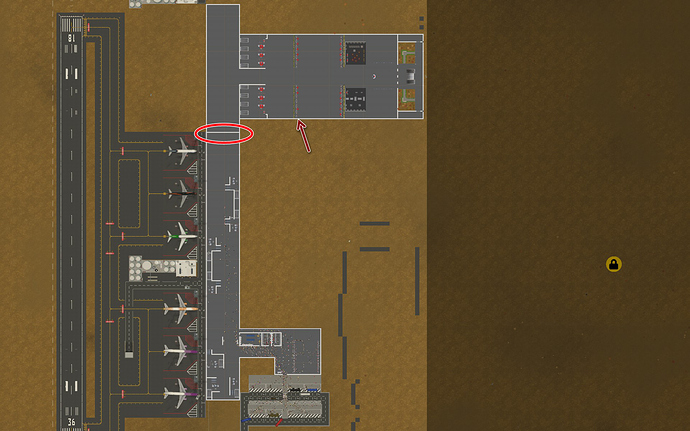 - the first state after building of an object has to be ‘closed’, not ‘open’) and the game choose them directly for flights that depart in the old part, but the check-in desks are not reachable for the PAX and staff. And the stands are not reachable from the desks.

Same error other shaping (the error is well know, also in this forum): 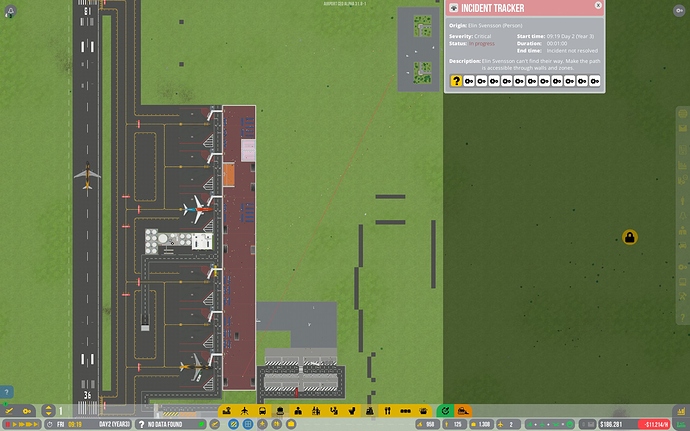 Under the small part of the new terminal on the upper right are also new bus- and taxistops on floor -2. The pathfinding-AI send PAX of the flights departing at the old part of the terminal at the bottom left, but they can never reach their flight. (ACEO-16104 and other)

The path and the availability from every passenger, every staff member and every object(!) has to be checked and calculated before doing the first step or setting active. 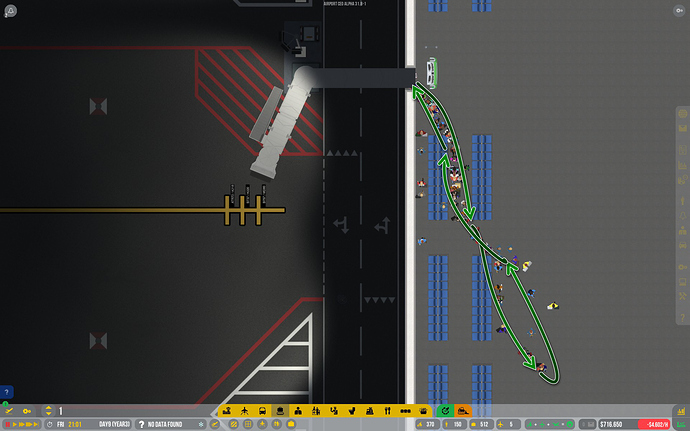 Pathfinding always goes nuts after a few hours of playing. In my games they tend not to find the way to check in anymore.
Does saving the game and loading again help for you or will the problem persist?

At least I can confirm,too: it’s a little bit better after save and reload.

@Manni: after rebuilding anything that changes any pax flow, I always make a save and reload, as that solved this issues normally.
Pax using strange, too long paths I can see regularly, especially when one or more escalator is involved.

The pax making it to check-in, are mostly too stupid to walk directly and fast to and through security. Combined with many unmanned security checkpoints (bad job task system) around another 10-50% gets lost, there.

Remaining pax inside security: around 10-33% of these are walking around anywhere, so they are late for boarding, too.

Additionally, very often boarding starts way too late, as staff from the other end of the airport is assigned to boarding desk and needs two hours to get there.

So around 25-80% of flight’s pax (mostly) prove that airport design a.s.o. is working. But bad pathfinding
combined with bad job assignment, makes it impossible to get more than 1-2 out of 20 flights served properly and on-time. (airport services are fine, if no stupid, unnecessary traffic jam appears)

Of course, this is not a ‘standard airport’, it is huge, has 84 medium stands and 7 (more ore less) separate terminals, all connected to each others.
So it is a challenge for pathfinding system, as there are dozens of completely different possibilities for nearly any path.

But it nevertheless is annoying, to see that few pax can make it (mostly), but most can’t…

Yes, I’ve tried out to save & reload. There was no improvement. Even worse: the first escalator error occurred again (see above).

@sirhc80: one more ‘yes’: the jetway-error starts after demolishing an escalator. Meanwhile, some hours later after rebuilding some more stairs and escalators, the PAX walk now the correct path out of plane to terminal exit.
I can already confirm your observations with the much smaller airport. Both passengers and staff spend too much time in illogical places or go way too long for no reason.
In my small, older terminal, the PAX went quickly from the bus to the terminal and there directly into the café until the check-in desks opened. Now that I have the bus / metro station on floor -2, they are also standing there around and only go up the 2 floors when the check-in desks open.
And now and then I have the problem that all PAX of a flight does not arrive at the terminal. Only the PAX of one flight, but all (ACEO-16211)