THIS MESSAGE IF YOU ARE WONDERING 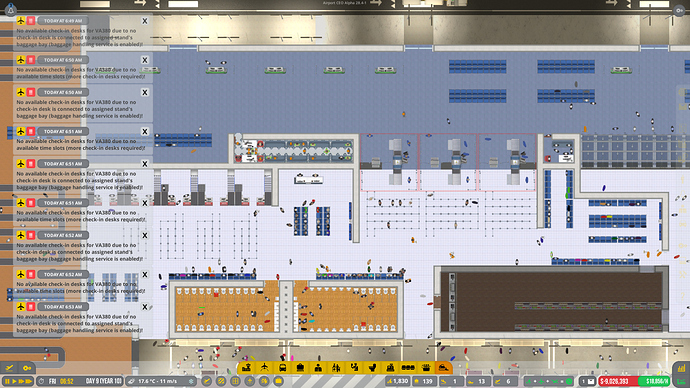 Yes, the check-in will still slot though.
Olof already mentioned he will investigate in Airport CEO Alpha 28.6 released - #49 by Rubble

is it a bug? because i received those message after the recent update, nothing showed up in the previous version…

it’s not a bug I’m afraid. Its been doing my head in as well trying to find space to build additional checkin desks when I recently had enough they would stack flights when they are staggered on the planner.

i have about 10 check-in desks XD so i need to build more desks to avoid this?

Depends on if you care about the alerts, if your passengers are getting checked in anyway, is it worth it?

i have about 10 check-in desks XD so i need to build more desks to avoid this?

2 per medium stand, 1 per small stand is what I build with.

Yep, I keep getting these check-in desk notifications and I’m trying to rack my brains to think of how to get more check-in desks… I think it depends on which baggage bay you link the stand to as well