They should add the Boeing 777-9X and have the wing tip fold in when parking. 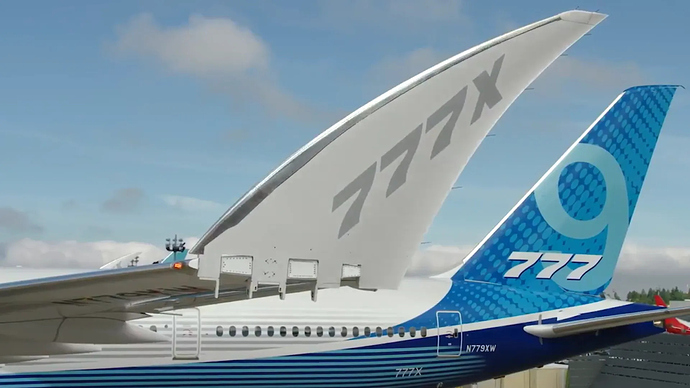 You’d see it schrink i guess

Don’t you see bend up though?

In my head you would see some movement. About eight months ago I talked with Olof about if these would be possible to implement.

When it has its first flight done or entered service with the first airline then it is good to go implemented I would say,

Wouldn’t it come down to the same reason we can’t have opening doors?

I suspect the tip would fold as with the flaps, to fit through the taxiways etc. That could be much easier.

you’d see something similar to the entrance gate

No doors do open. If you look at the small aircraft like the 1900D you can see open doors and see them open

The “no aircraft doors open inwards” is due to a design decision taken years ago and if we would change that today it would affect every aircraft and every modded livery in the game, i.e. insane amounts of work that are simply not worth it at this stage.

Moving winglets, for this specific model, might be possible though. I’m not in charge of aircraft creation however, so that’s something for @Fredrik to fully comment on.