Decided to see what would happen if I had one large gate seating area, so I came up with this design. 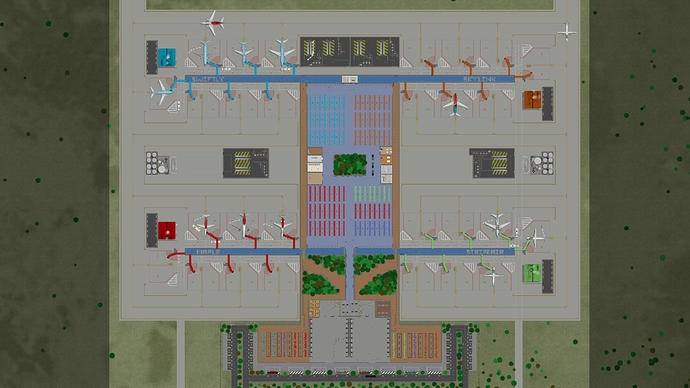 Overview of the airport. 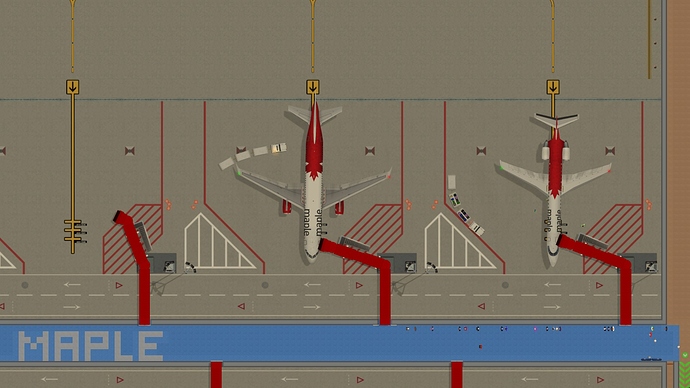 Closeup of a few Maple flight turnarounds in progress. 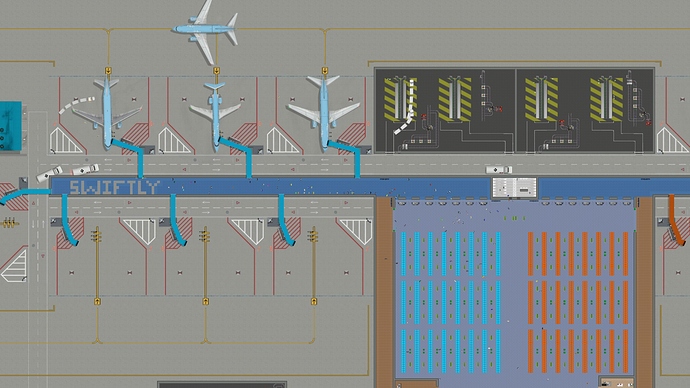 Shot of Swiftly’s gates plus the baggage terminals servicing them and the opposite concourses. 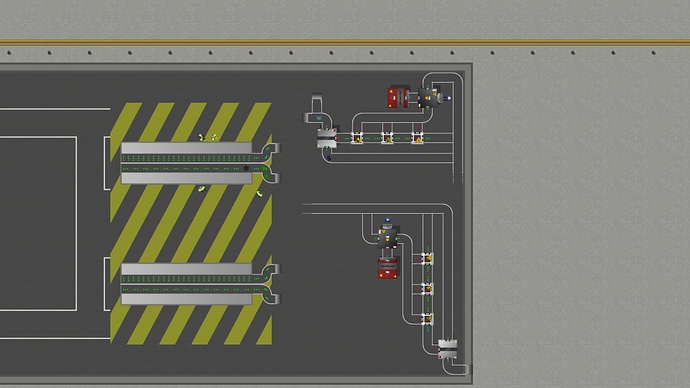 Closeup of a baggage terminal. Note the incoming scanning for banned items on flights, and the customs scanning area for prohibited items like organics, money, and drugs. 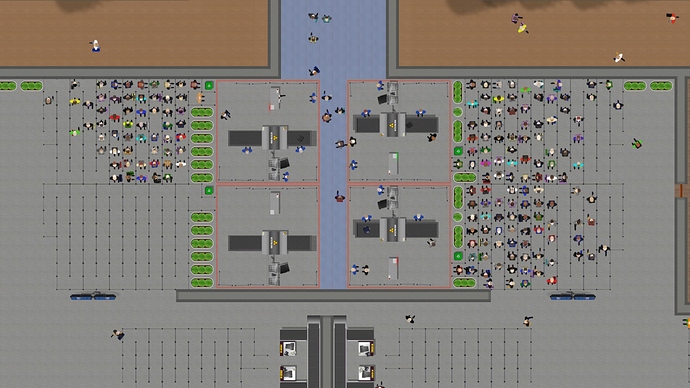 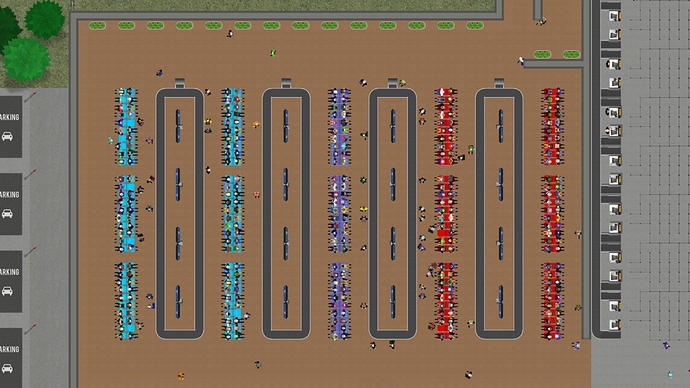 Bag claim, I really like how this turned out.

This is a really cool concept, it’s sort of like how T4 at Melbourne Airport (Australia) operates. Everyone waits in a central area and then only goes to the gate right when its time to board. I have two questions.

Do you have staffrooms near the depots?

And can you make a printscreen with bagage belts? Will be a big puzzle, isn’t it?

I filled the flight schedule for 1 day before I took screens but forgot to hire additional ramp agents and airport staff. Many delays as you could guess. I suspect the walking distance could be problematic, but half of the boarding desks are quite close to the front so i bet its a minor issue.

As far as performance, i was getting low 20 FPS on speed 1. At launch this airport would have been a slideshow. Amazing how far they have already come on this.

I will get a screen of the belts when i get home, and yes it is a tangled mess. I can’t wait for the day we can cross belts. I had to take much longer paths for this design.

I have ramp staff rooms behind every vehicle depot, and just the 1 staff room for everyone else next to security. No space down the piers so i am limited.

My current trick is to cross belts with “tilt trays” that mix incoming and outgoing baggage. When volume picks up, I create a split tray, to sort with 2 (or more) tilt trays and then loop them both to each-other to correct impossible paths.

Interesting solution, does that work for underground though? I also notice tilt trays really slow down belt traffic so I could see that becoming a big bottleneck. 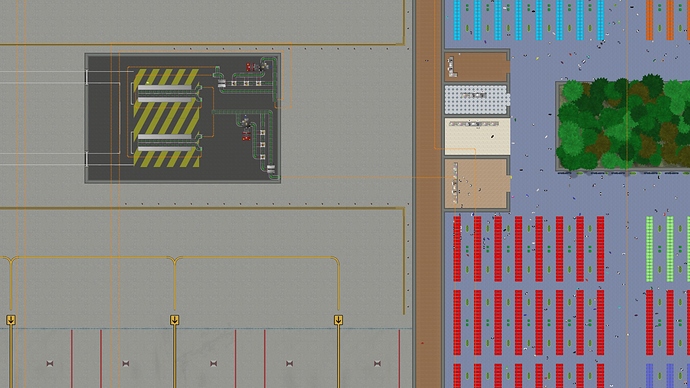 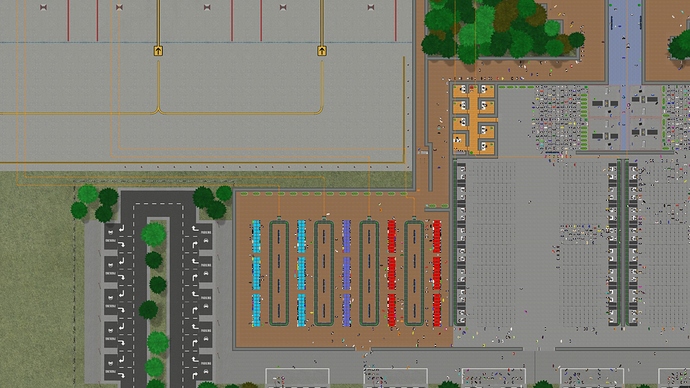 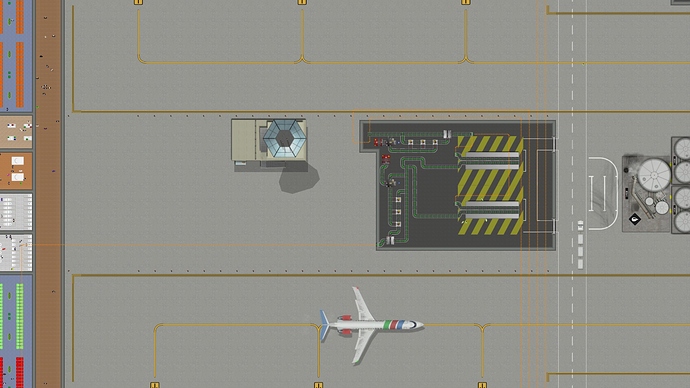 As you see, a rats nest near the bag bays, not as bad for bag claim as its past the incoming bag lines.

Build to many airports already… can’t find the game I did the trick in… ;). Edit coming in a bit…

Sounds good, a better solution than my rats nests would help get bags to their locations faster would definitely help.

There we go, from the top left, al check in desks are incoming (I wanted to build security systems in the empty room, but never came to it).

This way all incoming baggage has 2 choke points in stead of 1. 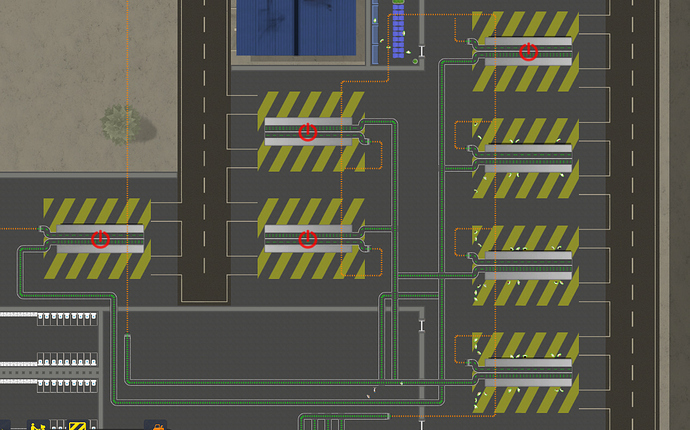 The pickup on this airport;

It hits 3 “hard splits” that go “left and forward”, then when hitting the bagage room the sorter will put it on roundabout or spit it into the loop that goes around all bays, to end up on the most left tilt tray. That way all luggage is sorted in series and can reach all bays due to the loop.

Bay 7 hits directly on the “loop” and will be sorted mixed with the end of the first hard split from the other bays.

Lastly; this is how I split underground betls atm 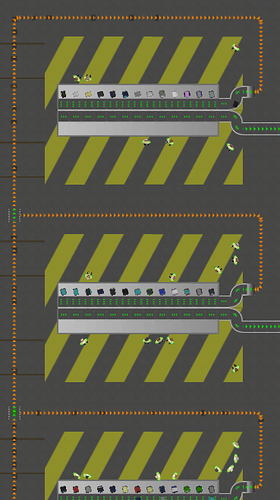