As tested the separated secure zones in this thread, I’ve extended the tests towards multiple terminals to see if that works.

Note, as in the separated secure zone thread, this airport ‘design’ is purely for testing purposes.

Ok, let’s not keep you waiting, to what I have seen so far IT WORKS!!

At least for the separating of buildings part and all based on separated secure zones. There is still some work to do as terminals as a setting/building/designation/etc are not part of the game yet. You can also have check-in desks in separated buildings by assigning the baggage bay to a stand and a check-in to the baggage bay, then PAX will check in at the right ‘terminal’ (thanks @jasperwillem for this addition). But bus/car stops and subway’s cannot be assigned to a terminal building yet and buildings cannot be assigned yet as a terminal. But there is a start and with the separated secure zones you can make a creative start with multiple terminals, looking forward to new designs! 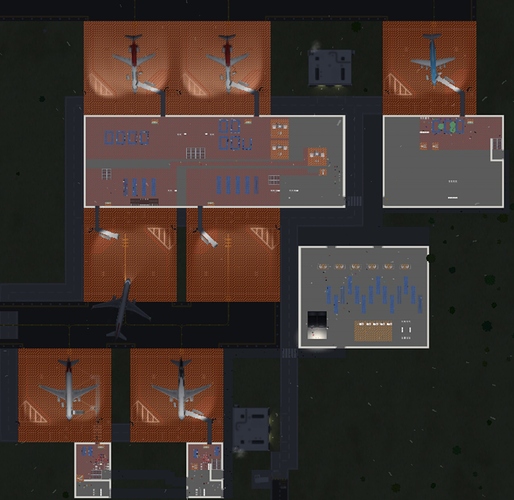 The top left terminal has 3 security zones and 4 stands, the others all have 1 but that could easily be multiple as well. The principal is all the same, if you keep the secure zones separated and the security stations connected to the correct stands, it all works like a charm!

As you can see I have almost all stands occupied

And the PAX are moving to the correct building, security desk and stand 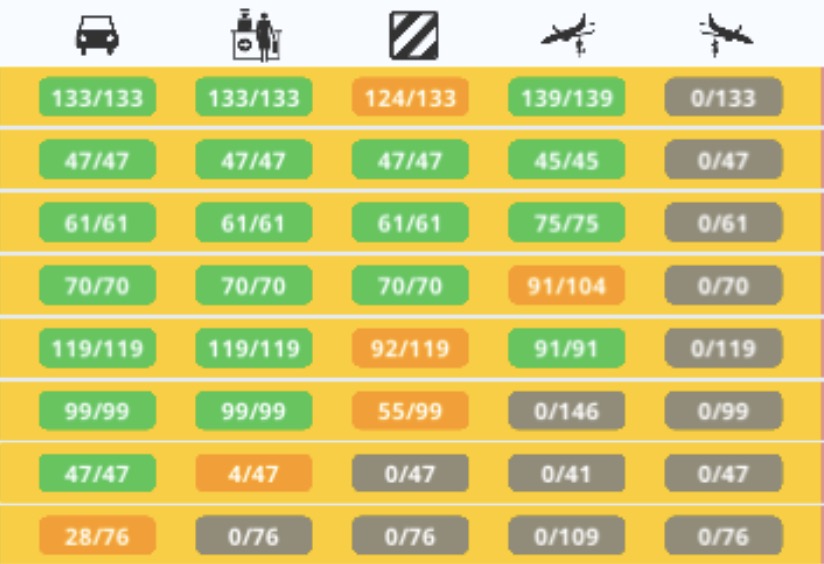 I’ve not have any delay so far, will let it run for some time to see if it will keep up. But so far I’m a happy bunny, will update here if I encounter any issues in the upcoming tests. Will probably also add some remote stands as well, to see if that works all together. Will keep you posted.

All we need now is moving walkways that will assist people in moving from that main check-in area to their secure terminal.

Correct, that bug is not fixed yet, devs are aware. But a S&R fixes that issue with created zones, it’s different for built and removed stands as they leave a secure/staff zone ‘footprint’ behind which you have to remove manually. Best is to switch on zones (shortcut key Z) and then remove what is left behind.

Correct, that bug is not fixed yet, devs are aware. But a S&R fixes that issue with created zones, it’s different for built and removed stands as they leave a secure/staff zone ‘footprint’ behind which you have to remove manually. Best is to switch on zones (shortcut key Z) and then remove what is left behind.

Have it running for a full in game year now and no issues encountered, apart from airport staff being late now and then, but that’s ‘standard’ behaviour. This is just PAX and ramp agent service rounds, no fuel or bagage added.

I would say try it out yourself and share your thoughts/experience.

So as far as I can see you’re making a central check in building and several terminal buildings and calling this working multiple terminals, because the PAX find their way to the right secure zone?

This is just another proof of working multiple secure zones, and don’t get me wrong, it’s interesting to hear it works for secure zones for now.

But to call it working multiple terminals each terminal would be in need of their own correct assigned check-ins.

Thats not a problem at all. Just assign the baggage bay to a stand and a check-in to the baggage bay, and PAX will always check in at the right terminal.

Good point as long as these are handled seperatly or baggage is used at all. (so that’s just a work around and no real solution, if it doesn’t work in any circumstance)

Next thing is, PAX should use the correct car stops, bus stops or subway stations which are near the desired terminal without walking across the whole map.

It’s not a fully working system yet, I agree, but the principal and basis for multiple terminals is there at least and with @jasperwillem ‘trick’ you can separate check-in over different buildings as well. But would indeed be very nice to have the ability to designate different terminals in the game and connect public transport, etc. so PAX know where to go. Hopefully with assigning terminals the game will also automatically separate secure zones, or even better besides terminals designate different secure zones in area’s. There is still work to do and much to look forward to, but for now people can play around with the separated secure zones and create airports with at least what looks like separated terminals

Will lower my enthusiasm a bit in the opening text, because I agree this is not a fully working multi terminal setup.

I have an idea, how about a train that connects terminals that aren’t connected like at KSFO

welcome MaxedOut, a terminal train, or monorail, has been discussed many, many, many times before and it won’t be coming for a llllloooooooooooooonnnnnnnngggggggg time

so someday it will

i am prepared to wait for that