Fictional airport serving Miami, USA. Chosen primarily due to warm climate courtesy of the advancements in the weather engine. This was created primarily in sandbox however the costs were often applied in standard gameplay and developed over time

Though I sadly don’t have images during the expansion leading to the current configuration, it does mostly follow a simple rectangle terminal expanded at each side then into additional piers and remote gates.

Any queries or to see close ups of any of the features for ideas, just let me know! Next time i’m in the game I will take some daytime photos of the airport in action.

Recently upgraded public road network has a dedicated entrance and a dedicated exit as a one way route around the carparks and transit facilities, with access to airside for service vehicles. The area is well lit for safety/security and features palm trees luminated. The ground level carparks are short stay, with a long stay basement carpark directly below with escalator access. 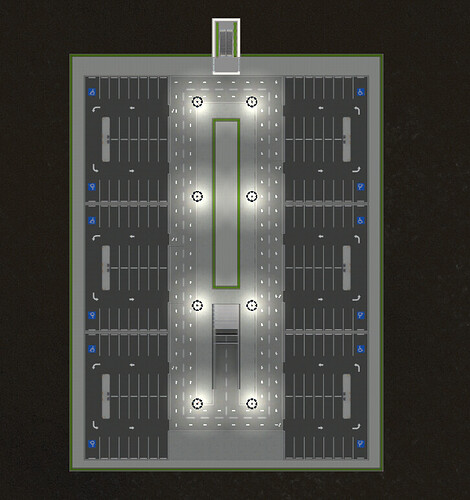 The central terminal area features the Check-In automated bag drop area split into 3 zones (separate baggage bays), a small shop and a coffee shop, plenty of seating and also the arrivals areas shown in the image (will come back to those).

The escalators located near the terminal front lead up to departures, firstly the security search area in a “toaster rack” formation to maximise use of the space also allowing further expansion. As shown, the area to the right has already been expanded.

Following the security search area, the passengers find themselves in a spacious departures area with multiple leisure outlets including food/drink, shops and also airline lounge for JetBlue premium customers. To the left you’ll see the international zone. This is accessed via the immigration desks featuring 2 manual desks and a recently expanded offering of automated desks, with 2 reversed to allow an exit route for passengers missed their flights.

The international area features additional facilities including a Virgin Atlantic lounge and additional seating enough for all 3 large stands to be in use simultaneously.

Back to the domestic area, a recently completed extension pier has been completed (bottom right of main image). This pier is dedicated to JetBlue following the exit of Zoom! airlines. The pier is located in close walking distance to their new lounge. Negotiations ongoing to rebrand the pier for our new airline.

The 3 bays to the left lead to arrivals however they have now been replaced by a dedicated arrivals drop off area in the basement of the airport, with an escalator directly into the arrivals baggage reclaim hall seen earlier. MHS is currently evaluating the use of these bus bays, with plans to reconfigure this area of the airport for additional remote departure gates.

The remote stands area is between the two runways to the north (based on image orientation). This was until recently unused land, now developed to serve 10x medium and 1x large stand, including those used for emergencies and overflow. The new tower, emergency response station and 2x large aircraft hangars are also found here. The airport has invested heavily in airside vehicle fleet with more than enough branded shuttle busses and service vehicles for peak operations.

Now we’re heading back underground to the recently reconfigured basement area. The baggage sortation area has been upgraded from just one single bay, to now 3 bays with the left most bay serving the international stands. 3x Tier 3 scanners operated by security officers to ensure a outstanding security rating ensuring no human error. Ramp and maintenance colleagues also have their rest room in this location, providing quick access to baggage bays and the service vehicle bays.

Vehicles are stored when not in use, in the basement assigned parking areas. We can also see a corridor on the far right which serves to segregate arrivals down from the Jet Blue dedicated pier, under the remote gates, to the main arrivals corridor.

Mentioned earlier, MHS now has a dedicated arrivals drop off area from the domestic remote stands. It features 3 basement level arrivals bus bays leading via an escalator to the arrivals baggage reclaim hall. The airside busses are intentionally assigned parking nearer than the basement, to the remote stands to ensure efficiency.

And that now brings us back to where we started, the central terminal area, ground floor. International passengers arrive from the left through a recently expanded immigration area with new automated gates now in operation. 6 large baggage reclaim areas serve the 3 baggage sortation bays below in the basement.

Baggage delivery times are kept to a minimum using rapid conveyor belts and short distances of the belts. The arrivals hall has it’s own improved toilet facilities, info desk, vending machines and plentiful seating even during busiest times (first arrivals of the day!).

3 security exits ensure a uncongested route back out into the public areas. The airport recently added addition seating to the left of the public area, featuring stools and desks for business travellers to comfortably use their laptops. Customers exit the terminal to the large, well lit, landscaped forecourt with access to the carparks across from the transit stops.

Thanks for reading! I look forward to hearing any feedback, positive or otherwise. Will add some more photos and plan to add a Satellite building for the remote stands directly using airbridges. This will allow the airport to expand it’s parking apron adding at least 8 new stands which would become the new remote stands north of a new satellite building.

Love the compact layout and the colour.

Significant expansion projects have now been completed at MHS with a strong profit margin as the airport reaches near full capacity.

The most noticeable projects are the saterlite building to Terminal 2 (original terminal) and the opening of Terminal 1 dedicated to Spirit and Skylink low cost carriers. 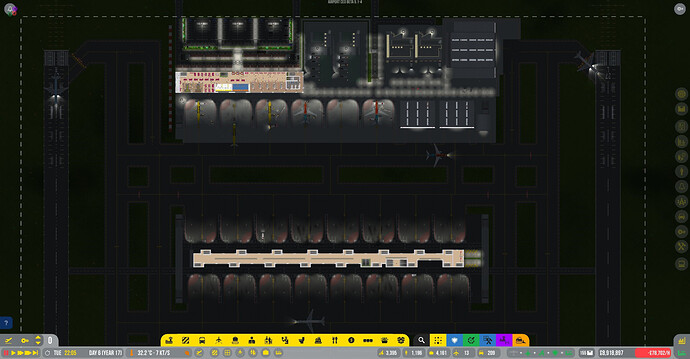 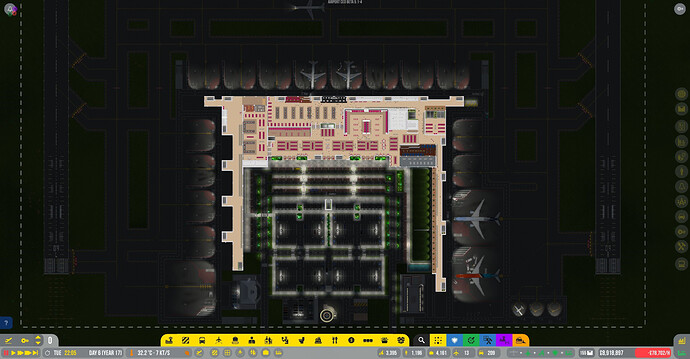 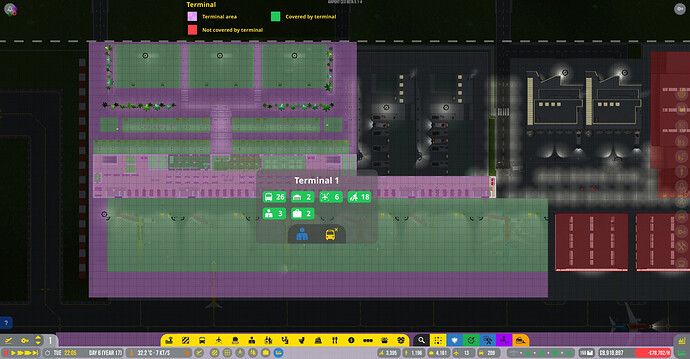 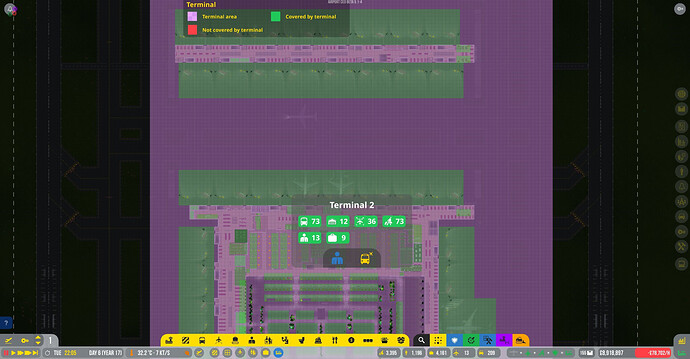 We start with the significantly improve transit area with additional capacity for T2 passengers via Car and Buses, with additional staff parking. There has also been a lot of investment into the lighting and landscaping including a “Miami HS” garden to welcome passengers and visible from the air. The forecourt is also partly covered over by the expanded security area above. 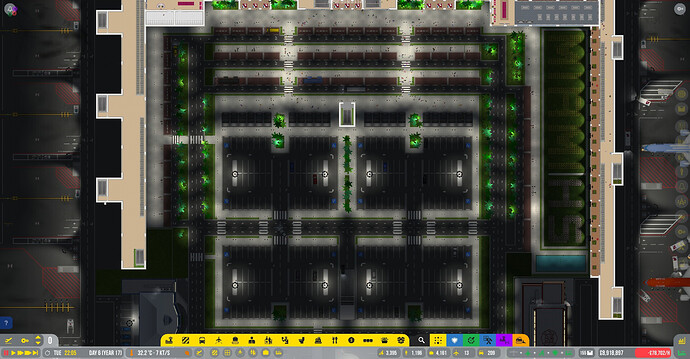 T2 generally services Domestic flights to the right and international to the left. The new International Check-In area is fully automated with additional kiosks, the Domestic area also now has an additional “island” to support the additional stands now linked to T2. Seating areas have also been increased, with a large coffee shop and convenience store (they are currently not used due to a bug). There is two toilet areas to the right of the check-in hall, with an additional area below International Check-In, this leads to the underpass to T1 used primarily by staff. 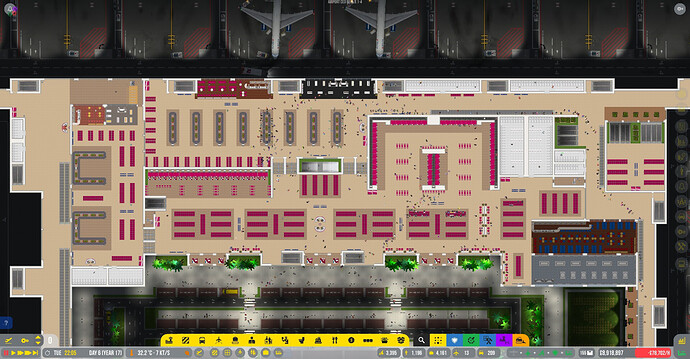 As we move up to level +1 we find a significantly increased security search area. Each search area serves all passengers, leading into the Departures secure zone. There is also a larger immigration checkpoint leading into International Departures (left). The number and quality of food and shop outlets in departures has been increased to serve the additional passengers. The choice includes Italian, Sushi, Subway, Coffee Shops, Bars and a Business Class lounge on level +2. All medium and large stands are served directly by airbridges. 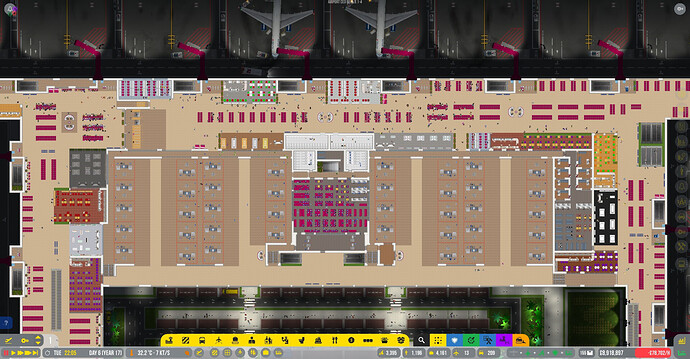 Also expanded, the international area/pier allows for a Large stand and an improved Business Class Lounge known as the Floridian Suites (across different lounges in different areas) 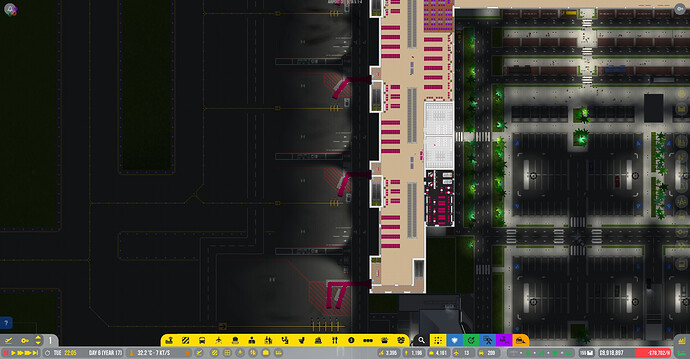 Moving across to the pier extension on the Domestic side of the terminal, there is now also 2 large stands used primarily by Skylink and Zoom with regular dreamliner services. The reconfiguration has also allowed space for 3 new Small stands served by remote boarding gates on level -1. 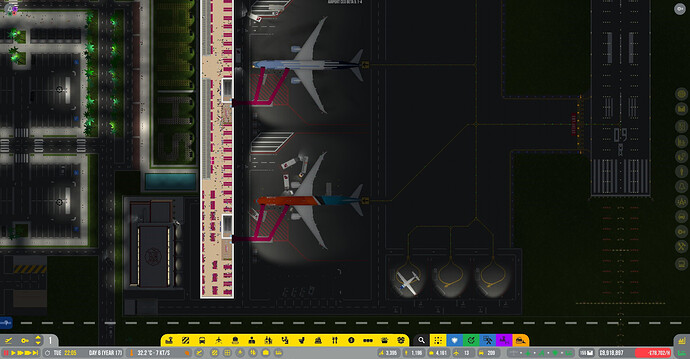 As mentioned, level +2 of T2 has recently opened to house the largest of the Floridian Suite lounges and also a unique outdoor viewing terrace. There is also toilet facilities on this level to save space below for retail. 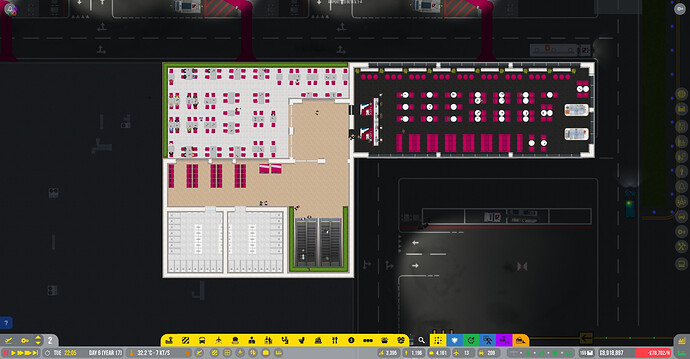 Heading underground to level -1 we find baggage sortation, remote boarding gates, ramp agent staff room and service vehicle parking areas. A key element of the satellite terminal is the new underpass corridor with walkalators and escalators. Elevators are planned to improve accessibility. 3 remote boarding gates serve the 3x Small stands, also the service car stops are found here. We can also see the access to the underpass to T1, there is however a staff only access route planned between T2b and T1. 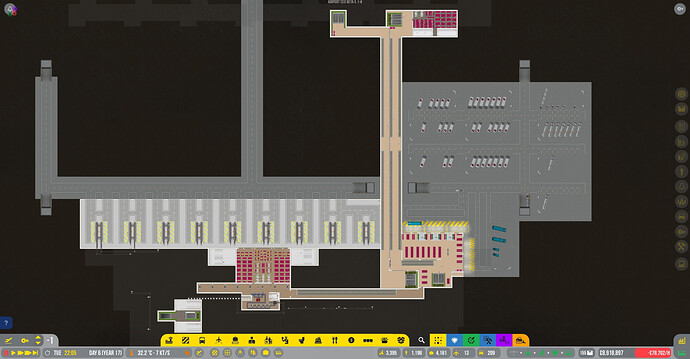 We now found ourselves in the new T2b satellite building used by Zoom, Southwest, United and Swiftly each with 4 dedicated gates with negotiations ongoing regarding further branding. Escalators allow easy access from the Level -1 underpass to Level +1 Departures with plentiful seating, vending machines and information screens and desks. 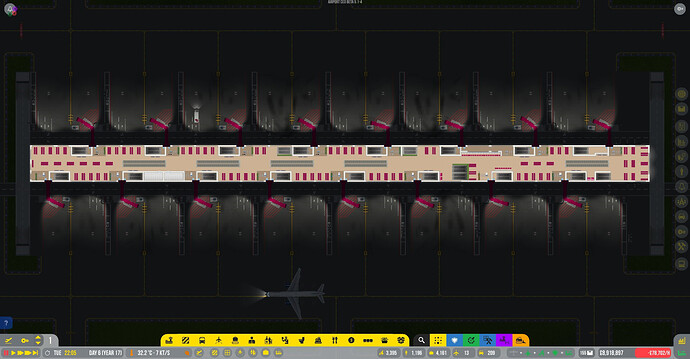 There is also retail and food outlets, also toilets, found on Level +2 with a more modest outdoor viewing terrace for our customers using T2b Satellite gates. 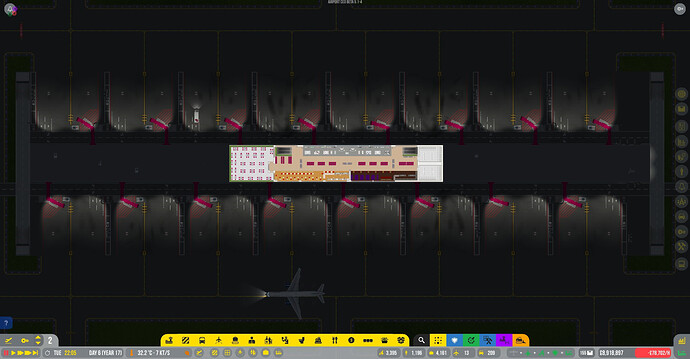 We now head down to Level 0 for our arriving customers, featuring walkalators due to the long walk to baggage reclaim. All areas of T2 are fully Arrival/Departure segregated. 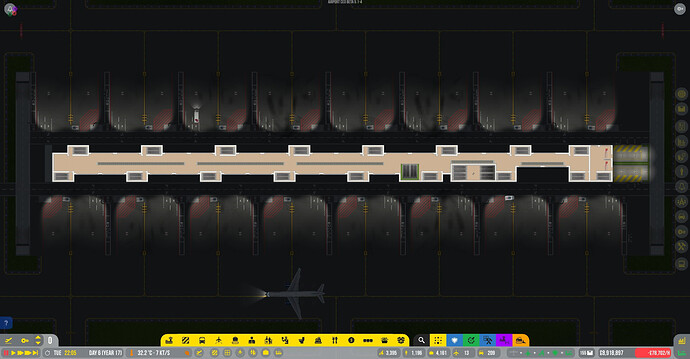 Our baggage reclaim hall has been completely remodelled when compared to our original layout. Firstly, international baggage is now housed in it’s own segregated facility with a larger immigration area. This has allowed the domestic area to offer now 8 baggage reclaim areas, additional seating, larger toilet areas and most notably the cafe and shop franchises in both arrival areas. 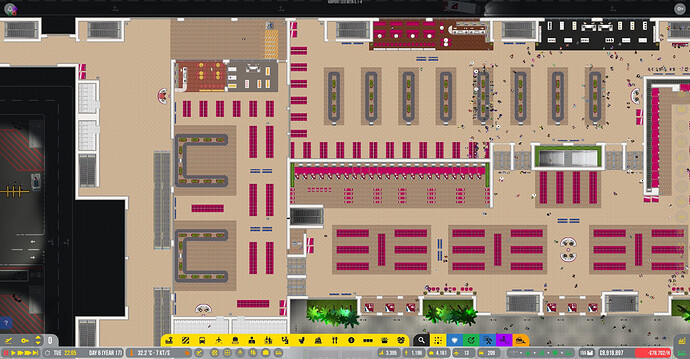 We now go deep below the terminal to Level -2. Simply, we find the baggage system and our underpass to the new T1 facility for two low cost airlines, Spirit and Zoom. 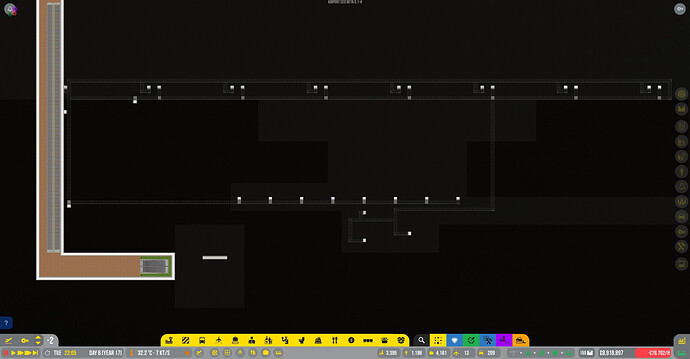 The terminal is very simple, efficient and cost effective. Services are kept to a reasonable minimum yet modern. This terminal also operates 24hr at full capacity. The terminal is also very compact as spaces is very limited at MHS. 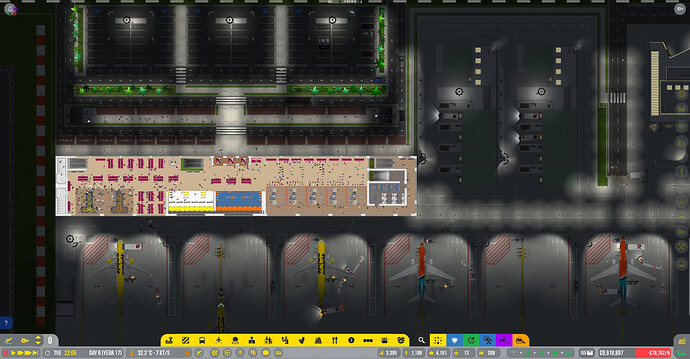 Up to level +1 we find the secure zone, shared by Departing and Arriving customers to maximise the use of space in T1. Close proximately to the service road access checkpoint and depots ensures strong punctuality for T1 flights, the fuel depot (there are two) can be found below this area. 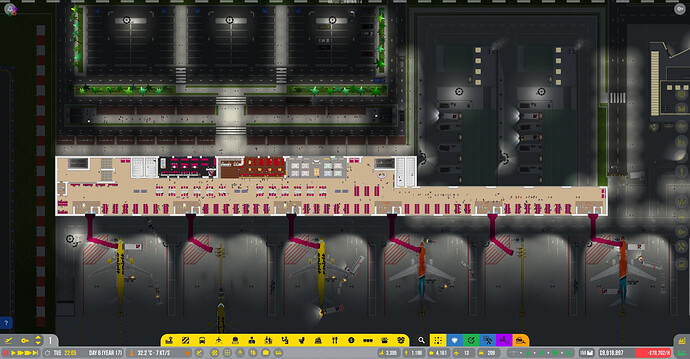 So, that is the latest and likely the final edition of the MHS Miami Homestead Airport journey as the airport is now critically at capacity. Flight planner is automated therefore the start of each day does witness a backlog of arriving flights held overhead.

I can only dream that one day the flight planner will have some form of template drag and drop, or customisation in some way for hours on each stand to stagger flights without doing it fully manually. It has been requested a lot in the forum but so far no official word. I’m afraid to ask as I fear it will be confirmed as a non-starter feature

Enjoy! any feedback or queries welcome! 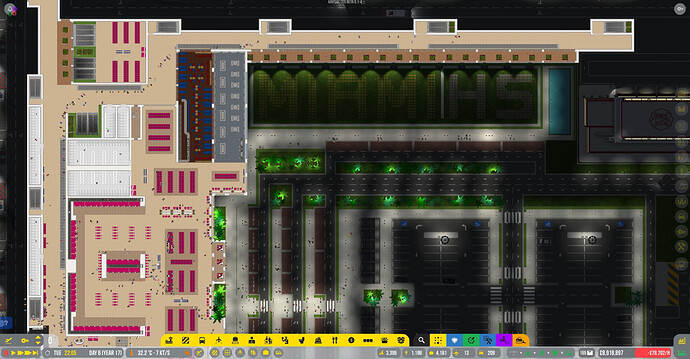 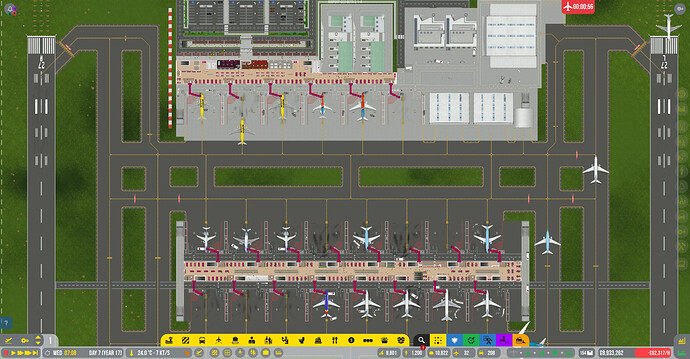 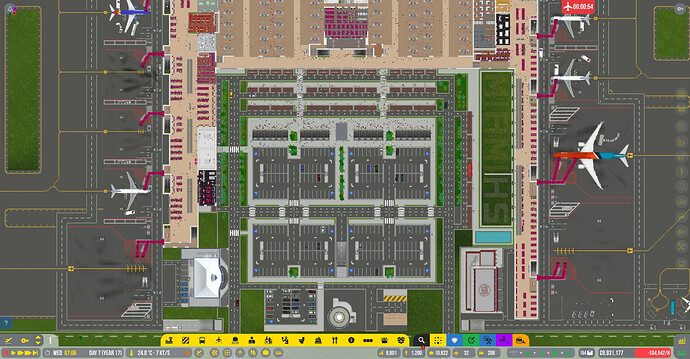 Great! How much net profit does it give out per day? What is the overall rating?

Looks incredible! Great job, although, I can’t see the racetrack.