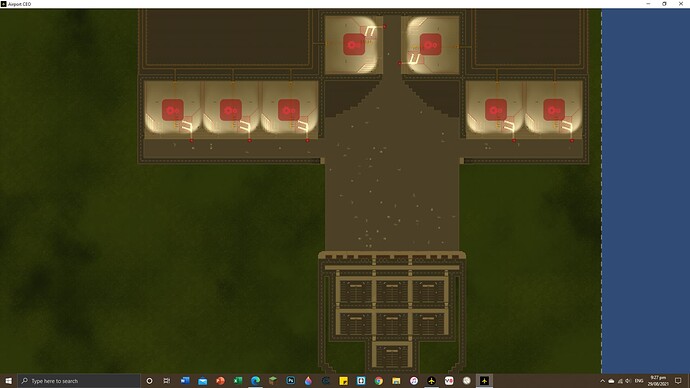 do you guys think it looks okay?? My brother said it looks kinda weird

And do you guys think that, the “realistic building” would be fun??

As someone who built Changi Airport as realistically as I could with the game’s engine, at some point in the game you start being limited by the game itself rather than your planning. It does start getting frustrating when things start to slow and tank. The airports in real life are designed like that exactly because the design works, but only when real humans operate it. In my megabuild I had many ai limitations such as planes waiting forever to taxi because of the queue system, passengers dropping off at the wrong terminal, catering trucks taking a scenic route around the whole airport to a depot on the other end instead of the nearby depot.

However I don’t want it to discourage you and I wish you all the best! Just know that if the airport cripples, it’s not always your fault and you should be brave to close a stand or two or ten to make a tweak to systems and designs

Thank you for the tips and words of encouragement, I’ll be sure to apply these during my gameplay

I am a bit confused, you play on a changed map size but you don’t use realistic taxiway widths where planes won’t touch eachother. Just a small realism detail.

I tried to make the taxiway realistic…but it was too thick for my liking but I’ll try tweaking it for the final design. Thanks for the insights