I am wondering what is needed in order to get medium flights on large stands. So far I have:

Everything seems to be in order to receive medium flights, but the only kind of flights that I’m being offered in my contracts are large flights. My flight type slider is 70% large/30% medium, but, again, I’m only getting offered large flights.

What am I doing wrong?

hmmm… Do you have pushback trucks and baggage belt loader trucks for medium aircraft?

Can you try this;

Then see if flights with medium airplanes are starting. f it start, it means that there is a bug. If it doesn’t start, that means there is something else.

I thought about that - I did buy a few “small” belt loaders and push trucks but it didn’t make a difference.

I’ll try that next!

OK so I did some tests. Something is definitely fishy.

First, let me confirm that my large stands are set to accept medium flights: 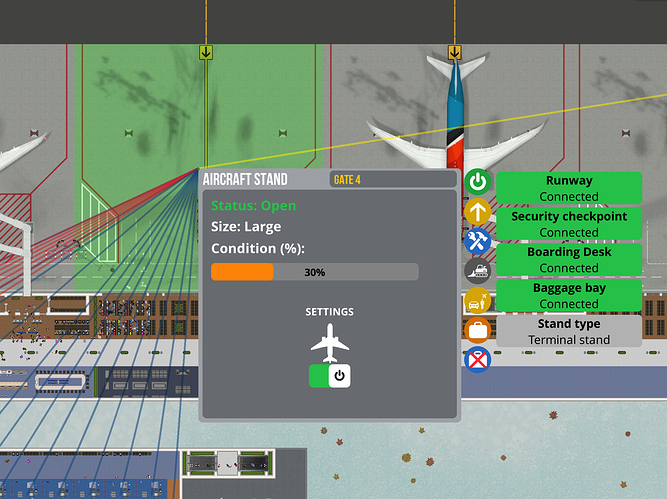 Second, once I built a medium stand, ONLY THEN did

(a) medium-flight contracts begin spawning; and

So it appears that right now, you have to have a medium stand before medium flights will appear.

Even then, medium flights would only go into the medium stand in the scheduler.

I was able to reschedule a medium flight into a large stand:

It looks like a large flight got scheduled as a medium?

That looks like a large icon - and a B787 carrying 207 people - that got scheduled into a medium stand on a medium-length turnaround schedule.

Yeah this is fishy. Please report it to developers via in game bug report system so that they can check it out on Monday

Could we get a picture of the big bird on the medium stand?
For the lols

Could we get a picture of the big bird on the medium stand?
For the lols

Trust me, you don’t want to see it

Lol why is it all contorted and broken?

Trust me, you don’t want to see it

I can’t show you big bird on medium stand, but for a medium airplane on big bird stand;

Are some of the passengers walking along the blue walkway, past the aircraft to then walk back under the wing to the stairs?

That doesn’t seem right indeed. Passengers will never even be allowed to go near the wing. Might want to report a bug there @EG0611