Split from previous topic, to continue this discussion :

Has the game been abandoned

A certain number of tie wearing passengers of every flight is interested in using lounges. Those are the business class passengers.

There are no extra lines and check-ins for those

Next to the Boarding Desk I installed two Lounges, for two airlines

In the next attempt I widened out the Lounge to include the Boarding Desks
However, the flight completed and left with no passengers!
I then returned the Lounge back to its original

However none of these are used by any passengers :
Information Desk
Buffet
4 x Sofa
8 x Seat
2 x Table
Sign

Lounges only need an info desk, a buffet and maybe some seatings.
Make sure to assign “any airline” or a defined airline 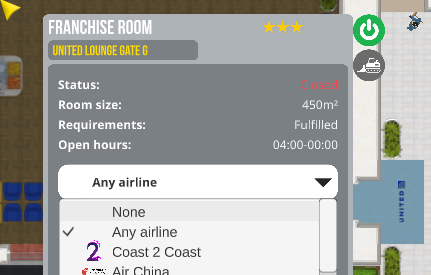 Also they do operate sadly only from 4am to midnight and only when service agents are at the info desks.

My lounges are pretty filled. 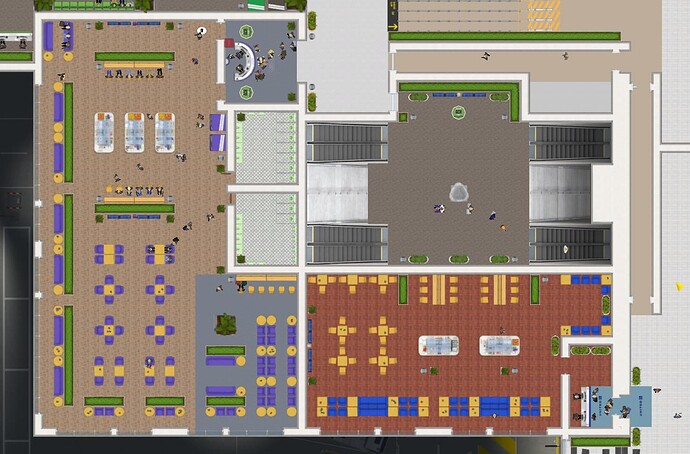 by the way, the “economy” signs at the desks are useless.

I created ONE and TWO first
Yes, they share a single buffet table!

I then created THREE and FOUR
THREE is the one I experimented with
Extended to the Boarding Desk, then revised it back

I have been waiting until all the passengers arrive, then check their Boarding Pass
They are all Class A
I have never seen any other class 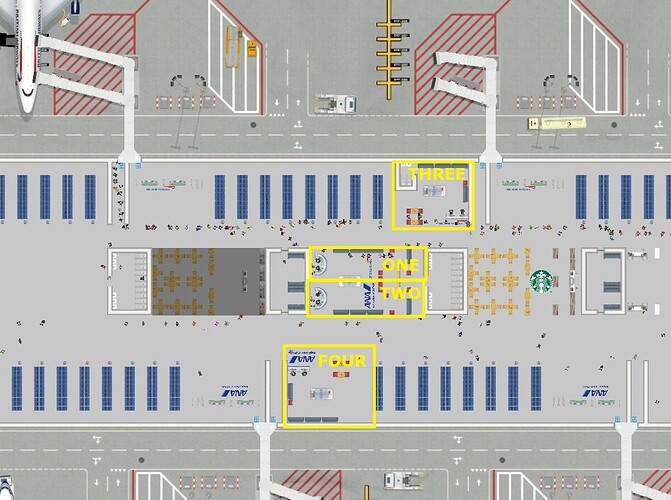 Erm… How do you get passengers to use your lounges? I had four allocated to airlines in my previous build and not a soul used them…

… built the lounge and opened it. They came without asking.
And since a few patches ago, toilets within lounges are also used only by valid lounge passengers.

Can you both drop your saves to the Workshop?

How do you get passengers to use your lounges? I had four allocated to airlines in my previous build and not a soul used them

I tried in my previous test airport, gave in
This is now really the only thing I have left to test and have working!

Can you both drop your saves to the Workshop?

I do not use steam (I assume that is what you mean)
Equally, I now have quite a heavily modified version
Want to take a punt and see what happens?
Need instructions on how to upload save to steam

Update -
Logged into steam website, no option to upload
I cannot come out of the current world (at the moment)

I do not use steam

Then what do you use? If you did not get the game through Steam, where did you get it from?

How did you modify it? There are no code-based modding improvements, so how?

You upload the game to steam via the load game panel and the little steam icon. There is no website involved

If you did not get the game through Steam, where did you get it from?

I purchased ACEO early in December 2021, but steam has been added to the firewall since

How did you modify it? There are no code-based modding improvements, so how?

You upload the game to steam via the load game panel and the little steam icon. There is no website involved

I doubt that will work
As above, steam is denied in the firewall
When I start ACEO on my computer it return
“Cannot connect to steam - No updates - Please try later”

Hold on, just checking, could this be a FIRST!?!
THREE - British Airways :
5 Business
FOUR - ANA :
8 Business

However, looking at their Boarding Passes they are still Class A
It is the FIRST I have seen, I will take it
It only took like nine game weeks! 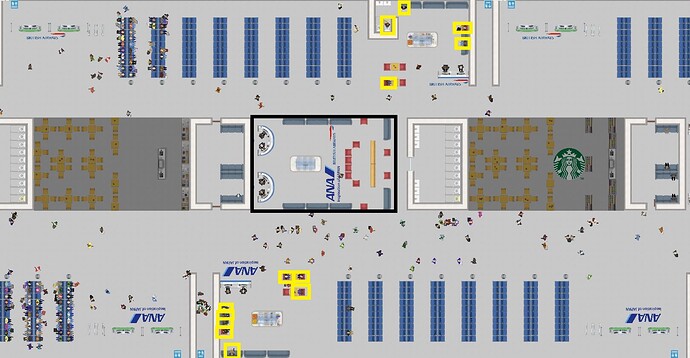 Virgin Atlantic have four stands, the most of any (International Terminal 2 and 3)
I have placed the Lounge towards the far end, stands 3 and 4
In this case I have expanded across the footfall area, this works with food and shops, and will compare
In effect passengers from the stands 1 and 2 may not see this, so this will confirm my suspicion

See what happens with this one, just hope it does not take several game days to see some results…

I have added further Lounges and these have all worked
It does take a full game day to wait for them to become used
Sadly they only really work as alternative seating, as there does not appear to be any income / sales
However, they appear to work best when the two rows of Large seating nearest the Boarding Desk become full

I then added some to my Domestic Terminal (Terminal One), where the assigned airlines have at least three stands -
easyJet, Ryanair and Logan Air
I had some doubts if these would even work
Equally, I know these airlines really do not offer a Lounge, but why not!
However, the Ryanair Lounge is incredibly busy
Furthermore, adding a connected Cafe appears to have worked