I have been having an issue with my small, slowly expanding, airport. My issue is the lack of small flight contracts to help my airport make money. I’ll have some days where I can’t fill up my flight planner with enough flights to make money during the whole day, this includes what I lose at night. My offered contracts are mainly for medium flights (See image below), which would be nice if I could afford to make a larger terminal to handle those flights. Is this a bug in the game? I didn’t have this issue in A23 (I’m using the Steam release), but noticed it when trying to book flights for the next day.

Any help that you guys can suggest, other than taking out all the loans and building the larger terminal, would be appreciated. 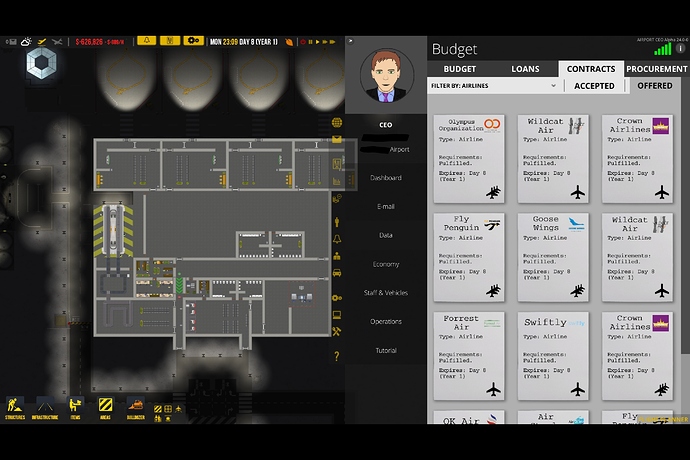 maybe you should do make your airport a general aviation airport.

i was told that the contracts will be like that to make way for the new contract system,which will be implemented later.I have the same problem as you and i have 7 small stands and most of the time all of those stands are empty.

you could read the newest devlog for more info about the new contract system here
https://www.airportceo.com/devlog-97-alpha-24-deployed-airline-livery-modding-enabled-steam-cloud-saves-enabled-future-airline-contract-system/

Yea I agree, finding a contract for small commercial planes is nearly non-existant atm… - Pain in the butt having my small stands not doing anyhting…

We have a fix for this, new patch will be up in a few hours.

Sounds Air has now been made. Cessna 208 flights only. I’ll send it you over. 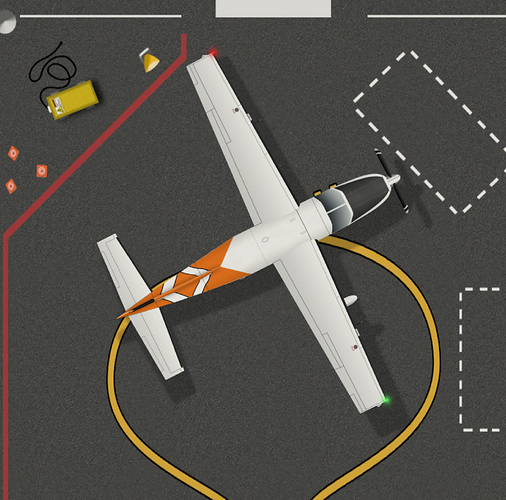 Ooo thank you, will be a nice addition

Is the fix out already? Mostly see medium contracts. Besides that; the written contract numbers are not always matching the flights offered in flight planner.

Don’t think it is, it is still almost impossible to find small flights, I even have an airline that is only a small plane, and that only showed up once in the last 2 hours in the contracts page.

Sounds Air shows up for me regularly as single and multi flights, in fact I’ve got one right now on the slab.

Only ever had 1 multi flight for Sounds Air, no single flights at all since I installed it.

What version you on? I’ve had plenty since I made it. I also looked in ACEOMM and it wasn’t listed in there so that one is just for you and I. If anyone wants it though, PM me.

FYI Qantas 737-800 now about to test with the improved livery quality. Need to cycle contracts though before it shows up

Which version of exp?

Yea Jasper, I find them very occasionally in multi flights, but none in single flights.

Had 1 single repeating small flight, but the contract told me I would get small and medium in combo, so, it was a complete mismatch (I think it was Forest Air). 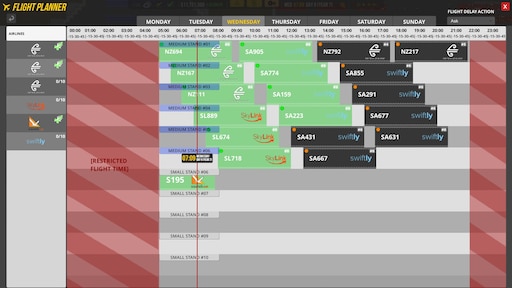 One of my repeating small flights said two flights a day, but only one appears in the flight planner.

Go back to 24 would be my advice right now and wait for the hot fix.

I was just playing on the newest Steam experimental branch and the changes that were made to the contract system helped a lot! I’m no longer flooded with medium class flights and only have the small class contracts available. It was great to see that you replied so fast and already had a fix in mind.

Again, thank you so much! I hope that I can help further with the development process!