I noticed that lighting from doors/windows does not scatter to the ground. This makes the building look really weird and not like part of the environment. 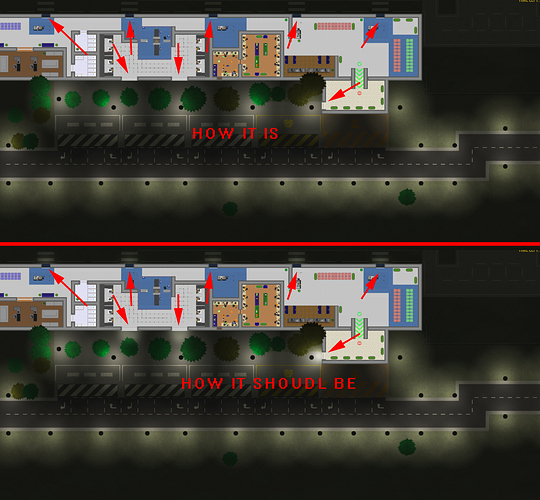 Also I believe this was addressed in the latest devlog?

We don’t use lightning for the terminal as that would kill the performance. Instead we use a special material on the textures, which does not react to light meaning it simply displays the texture as it is. For external structures we use another material, which reacts to the sun light. If we would not have this setup, the terminal would also go completely dark during the night. The system we have is designed so that can easily set correct lightning when something is inside and outside by just changing the material. To make the effect you suggests, we could add a light source to all doors, very much possible but will most likely take performance. Real time light is very expensive in Unity so we don’t want to add too much.

I understand your view but we don’t want to add this now when the game is not fully optimized yet.

I appreciate the answer and I see your point =) But I really do think its an important detail, and I think it would be a great idea to add a light source on the doors to make it happen! =) If the game can handle all those outdoor lights, the doors are a given.
Hope to see it added later! =)

Looking forward to the release =)

Although I’m a perfectionist, I don’t really think this is too important if it lowers the performance of the game… The game also doesn’t have any windows yet, so that extra light source could be implemented when windows are implemented. Just imagine that the doors are closed and have no windows.

For large airports performance is imperative. You want a playable game, and though I don’t think the game should be designed for low spec machines (encourages upgrading and innovation and all that) I think that all these people who expect to build airports with more than 2000 agents are going to be disappointed when it’s the doors slowing things down.

Just a thought, but could the street lamps just light up the road (say in a 180 degree arc) rather than a full 360 degree area?

Although I wasn’t really in for this idea back in 2017, my mind changed since the implementation of windows.

Olof, Fredrik & Alexander: is the lightning system still setup this way? (ie. makes it hard to implement this?)