On that 2nd image, you have them exiting into the security station area?

But that was the only way to position the security stations in that direction. I’ve looked for different locations for the exits but for now that’s not possible. When multi floors are available I can create departure and arrival on separate floors, this have to do for now… I’m always open for better ideas/solutions

has caused these kind of glitches in the past.

The only thing thats glitching with me is gridlines, when zooming / moving or loading menus, they sometimes are on top suddenly.

And I had some off grid object placement glitching.

This is interesting as with a possible update of 2nd story terminals, and heavy aircraft Sea-Tac International airport, is build a jet bridge that will allow 747’s to go under it, it will be so cool to see in the future of Sea-Tac and would love to see this in the game.

Love this thread. Hopefully when multifloor hits you can do the real skybridge and get the bag claim and other things where they really are. I will tackle a few of my wosh projects when we get multifloor as well.

Just had a look at Sea-Tac International airport, that’s also a cool looking airport!! Will put it on my ‘to be built’ list! Will probably be a bit hard to create the curves in the building, but they have a very cool runway layout. Looking at the size of the terminals in total, maybe it will only be the new international terminal first

But the bridge is very cool: 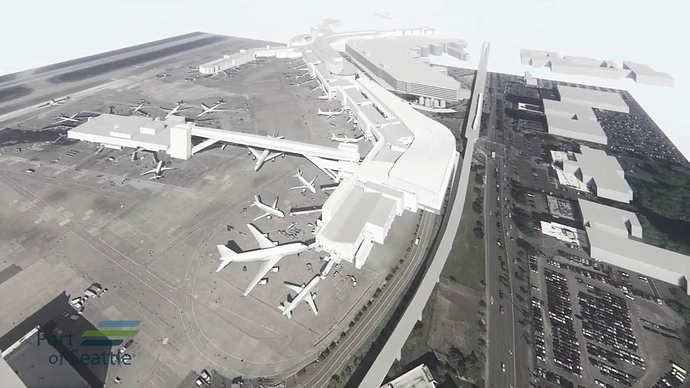 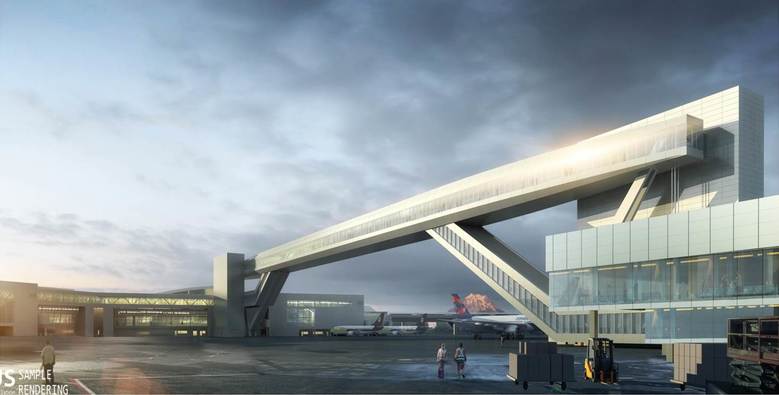 Hope so as well! Curious if the multi floors will also support skybridges, that would be really cool!

With multi floors the majority can be built in the correct place, but before the airport can be fully opened there is still some work to be done on the feature side. Probably also have to rebuilt the whole airport in the current map, as this is created on the old map that I ‘hacked’ to get a bigger area. In that version before the UI overhaul you could not buy extra land yet, so had to ‘hack’ the config file. Let’s see, will be a nice project to perform the 10K PAX stress test

When you ever build it, if you got it on steam, can you post it there, because Sea-Tac is my local airport so it would be cool to relate to. And steam is the only way I can download.

When you build vehicle hangers, place them all where the aircraft hangers are located. This would look so cool make sure node from a taxiway point to itt though

Thanks for the confidence

When I have built it (no clue yet when) as with Klia2 I will post a blueprint on Steam so you can complete it however you like.

Ohh it’s a hub for Alaskan airlines, which means the airport already has a spot for small stands, Because of Horizon Airlines, which Alaskan owns.

By the way do you know how to mod in new airlines?

I’m no ‘modder’, for all info on that please have a look at the modding topics. An option is to use the Steam mods and enable them in the main menu, otherwise you could use ACEOMM (ACEO Mod Manager). As a Mac user I’ve no experience with ACEOMM as it is not working on a Mac, I use Steam mods.

I only use steam mods, because I can trust them.

What @Puma said. I’m also a Mac user but do make quite a few mods as well

Lots of stuff here in the forums about modding. Shout me also if needed.

Maybe one day you can come to Malaysia via this airport (via AirAsia) and experience the mayhem yourself. It was true that pax/staff need to walk very far into the terminal and caused delays. Delays often happened in this airport quite often in real life. If the multi-floor feature is featured in the future, maybe you can build the gateway shopping. It looks like a mall except that there are FIDS installed in stores and in the walkway.

I’ve been to Malaysia once but that was before KLIA2 was operational, maybe again in the future.

I will wait for the multi-floors to be delivered before working on this airport again, as I probably have to completely rebuilt the airport in the new map anyway. The current built is still in the old map and I’ve manipulated it to have the full map available, as on that map it was not possible yet to buy the other land plots. This map still works in the current version, but there have been so much changes and bug fixes that I don’t know what influence the current built has on that and vice versa. As the airport is so big a lot of stuff is happening and hard to tell if things are a bug or part of the older built.

With the new pathfinding system and task assignment the airport will operate a lot better than in the past, but can imagine that because of the size there will still be delays and PAX missing their flights…