The Fuel truck seems to run out of fuel when refuelling the large airlines. should this happen ? because its annoying and delaying files

The biggest planes do generally drain a fuel truck (even a trailer truck). Make sure you have enough trucks available for a second one to be dispatched to that flight, rather than waiting for the first one to refuel and come back

yeh thats what I do have multiple but I feel it should be implemented so that fuel trucks dont need to refuel in the middle of a task.

Anyway: how many trucks are necessary to fill up a large plane in real live, does someone know?

Lots of factors, what aircraft, how much fuel is needed for the flight, what is the capacity of the truck etc.

I just found a trailer truck having 45m³ capacity = 45000 litres. Looks like there would be bigger ones, but not that much. 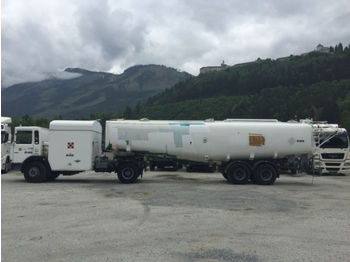 I guess every bigger airport will have underground fuel lines to solve this.

Edit:
Additional info:
Lufthansa advertises the B787 with a very low fuel consumption of only 2.9 litres per passenger per 100km.
The planes have 250-300 seats according to their fact sheet, let’s calculate the “best case” with just 250 seats (= less fuel consumption).
250 passengers * 2.9 litres = 725 litres per 100 km.
Frankfurt to New York (probably not the most uncommon route for Lufthansa) is a distance of 6205 km.
We end up with a best case consumption of almost exactly 45.000 kg or 45 tons. That’s of course just the actual usage without the required reserve and possible contingency fuel.
So we end up with the fuel-saving B787 in the best case being able to finish the route FRA-JFK with the last drops of fuel if the aforementioned truck was used (okay, they usually still have the reserve fuel from the last leg on the plane, so it might work out if they’re lucky).

Edit 2:
Finally found this website: https://www.esterer.de/en/sitemap.html
There you can find different sizes of fuel trailers, the biggest having a capacity of 80.000 litres.

I would be nice to have a new fuel truck just for big planes and maybe a new fuel depot which you pay for every day or month for unlimited fuel supply or it doesn’t need the refuelling truck to come and refuel every couple of days.