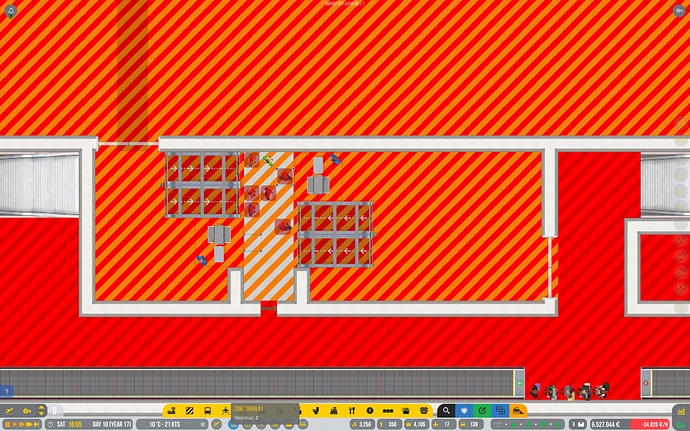 Pathfinding and zones are constantly broken / having issues. Here we see an example of security point between departures and arrivals, only useable for staff. Which can’t find its way through that. And Admins always think that exiting here gets them to underground station. Even if their workplace isn’t anywhere on this side of the building. If i don’t make it staff zone 100%, then passengers think this exit is for them. Damn if you do and damn if you don’t. Is there any clear guidance on how to set these zones so that they just work? Now they don’t, and especially when you build an elevator or escalator, you have to rezone under them to make them work. Which usually changes the zone numbers and all…

Pathfinding and zones are constantly broken / having issues. Here we see an example of security point between departures and arrivals, only useable for staff. Which can’t find its way through that. And Admins always think that exiting here gets them to underground station. Even if their workplace isn’t anywhere on this side of the building. If i don’t make it staff zone 100%, then passengers think this exit is for them. Damn if you do and damn if you don’t. Is there any clear guidance on how to set these zones so that they just work? Now they don’t, and especially when you build an elevator or escalator, you have to rezone under them to make them work. Which usually changes the zone numbers and all…

Did you drag the staff zone under the exits too?

What exactly are you trying to accomplish? I can’t really see the point of having a design like that judging just by the look of that screen, especially with the small door that goes immediately from open to secure (that will never work). I think we need a few more screenshots in order to understand what you want to accomplish by that design!

That little door was to let stuck people out, doesn’t have a place in grand scheme of things. This is what you instructed me to do a while back when i complained about arriving pax wanting to use departing area shops and toilets. That i should separate the zones but arrange exit and entry for staff to go from arrivals to departures. Top is stands on the pic, departing secure zone. Bottom is arriving. Ignore the small door.

This is what you instructed me to do a while back when i complained about arriving pax wanting to use departing area shops and toilets.

I must have misunderstood you then, could you supply a sketch or so of what you want to accomplish and I could perhaps give more proper guidance.

Security checkpoints and security exits I believe are strictly for use to and from a secure and non secure areas. They are the only way passengers or staff can transition between secure or non secure (some staff have exceptions such as security, they roam free)

Staff zoning simply stops passengers from entering or crossing an area for various reasons. Checkpoints have no influence or purpose for staff zones. Hence the different zoning category.

Segregation between arrival and departure is only possibly by literally a wall between them. Checkpoints do not influence this. I think Olof may have been referring to that in his advice that a physical barrier is needed but the staff still need a normal door to move between.

A simple door with the tiles of the door marked as staff will achieve the passengers not passing through the door. Actually you do not even need a door, just then tiles marked as a staff zone.

To change between secure and non secure as I say, you must use a checkpoint as the only way to achieve that. Nothing more nothing less works

One single line of staff zone tiles is sufficient from what I think you are trying to achieve here. No checkpoints needed.

Remember to think of anything outside of secure zones, as the default area. There is no identication of different areas, it is not zoned. Staff and passengers therefore do not understand in the example, why leaving your secure areas does not lead them to any unsecured area or facility such as a terminal exit or carpark. Instead they are trapped in a no mans land with no means of exit. Hope this helps.

In real world staff do not in any way require checkpoints between secure areas. They are cleared into a secure zone to work and roam as required, using usually biometrics or ID pass to get through doors. Of course some staff have access to only certain areas of an airport but this is not a matter of security search points generally speaking.

Passengers however will use checkpoints between arrivals and departure zones for connecting flights, countries usually like to apply their own laws and policies to anyone flying out of their airports despite where they have started their journey. This is not a feature of this game as I think it would be very complex to model.

At the end of the day, this is a game, and it can’t really signpost things as well as real life. I say the simpler the better, so I usually try to funnel everyone through one security exit, and everyone goes through the same set of security checkpoints, so people don’t end up going through a security checkpoint to say Pier A, when they want to go to Pier B. Yes, it limits how the airport can be designed, but…

That’s what i tried to do in the past, wall and door with staff zone in it. If i don’t separate the security zones, arriving pax starts to complain that they can’t find a path to departure zone toilets, shops, restaurants etc. This is when I asked about the full separation from Olof and he instructed to build security checks for staff and separate the zones totally. It works now for the passengers as intended but staff is having issues. Not everyone, not all the time, but some and occasionally, depending on their task i guess. So it kind a works and kind a doesn’t. Anyway, issue is only with staff now and not with passengers.

Stands are same zone with the departures by nature. Arrivals are different zone. If they touch, they become one. Leaving one unsecure tile in between apparently doesn’t allow staff to go through as per my earlier guidance received, and exit & entry must be placed.

Here is some pics to explain this situation better 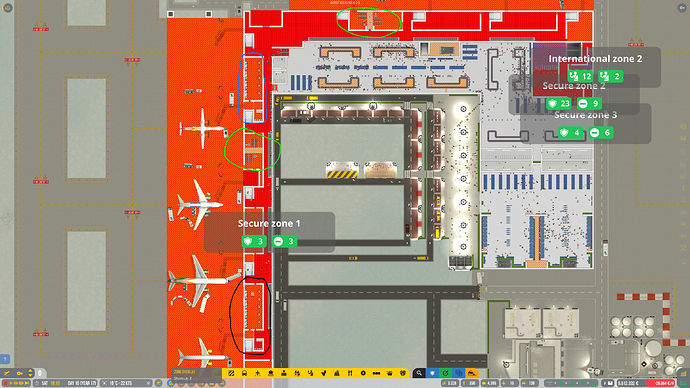 Secure zone 2 is on upstairs and covers the whole departure area for both domestic and international flights, which depart from a pier building to the right. Everything works fine, no problems here.

Secure Zone 1 is the arrivals. Arriving passengers are taken down from the gate to ground floor level as soon as they exit the plane. One zone covers domestic arrivals, another covers international arrivals.

In the green circle you see the security check arrangements what I understood from previous instructions from few months back. This allows mainly ramp agents to go from zone 2 to zone 1 and vice versa.

Black is the normal arrangement for the staff room, blue shows how I changed it to to test if anyone would use that room. Now they only have access to zone 2 and change levels via gate airbridge.

Issue is the green arrangement. It mostly works, but some staff get confused with it. As long as it is configured to be staff only leading into staff area, passengers have no issues with it. Only administrators may try to exit here and get stuck because they obviously won’t get anywhere near metro from here. Administrators work on unsecured zone in level 3 of the building, above the restaurant so i don’t really understand why they’d go to secured area in the first place as all staff rooms are set not to accept any of the admin staff. Staff working and resting on these rooms on level 3 have those escalators taking them directly down to baggage claim hall so clear access to metro is there.

Not sure the need to have those secure zone partitions? Could be wrong but I don’t believe that is the intended use.

Instead you should simply zone a line of tiles as staff only and that is sufficient for various passenger segregation. Staff move freely within secure zones, as they do in real world (with some exceptions for baggage sorting areas in real world).

A secure zone is a roam free zone for staff effectively. They will exit that zone and expect to be able to access any non secured facilities and vice versa. The no mans land concept of a partition between secure zones is not supported.

Hope this helps a bit

Also recent enhancements with passenger path finding I think has ensured passengers will not try and reach facilities in the same secure zone that are divided by staff only routes/barriers/doors. They will only attempt to access what they can freely find a route to (toilets, bins, food and shops).

So like I say a simple staff zone line between any areas you want to segregate should do the job.

The secure zone is the identified area. Anything not secured is a roam free zone that should not he segregated or corned as a no mans land - it has no identity so therefore is not factored into any pathfinding other than someone wants to exit the secure zone so they will use any exit and expect that to take them immediately to an open public zone

A departures area also requires at least one secure exit back to the free public zone for anyone missed a flight and often used by staff too. Any entrance into a secure or international zone needs a reverse route/exit nearby as a general rule, for missed flights and convenience for staff

That exit side is totally sorted.

Still the biggest question for the whole design is / was: why most of the staff were ok, and only some had issues? Surely same AI controls whole staff?