When i zone terminal zones.
And then go into the list where i can change the amount of each work force. If I put 10 of something. The game will change the number, and punch it up to 18 or something. Why?

Also if assign a truck to a stand via the vehicle-tab
Will that one truck also be assigned inside the terminal layout where i change the numbers assigned to the terminal.

And last but not least. What is the point of assigning terminals? I do believe that personnel and vehicles will go the closest staff-room/parking after they are done with their assigned job.

Not sure I quite understand what’s happening wit the work force, but assigning terminals helps passengers know which building/transit structure to go to for their flight

Thanks, Then i should definitely have it. Because i have a very big airport.
Atm i have no flights or gates operational until i can figure the terminals thing. Even if I close all the baggage bays and stand. The game will not let me put 0 or 1 Ramp agent, it will immediately push the number up.

I’m not fully sure what you mean, holding CTRL will increase the number by 10 as you assign them.

@Olof
I have 4 terminals. Zoned. Terminal 1 and 4 is in use and the game wants personnel to work there.
While terminal 2 and 3 is not operational so the game doesn’t expect me to put any one there.
Also i have the " auto assign terminal " off.

I have a small terminal and a big terminal. I have the game open right now. So i can take pics if needed or so.

Here is the problem.
In my small terminal i have one medium stand and one baggage bay. Also 3 small stands set to GA only. The Medium stand is closed. No plan flights.
The baggage bay is closed. So in theory i do not need any ramp agents in terminal 4.

When i press T and open the list i can see that 6 ramp agents are assinged. If i press the minus and take that down to 0. After about 10 minutes in-game time. The game have assigned all six back to the same terminal.

And if i want those 6 in a another terminal i have to be very fast with assigning them there before the game does what it want.

Let me know if this makes sense of if we should take it Swedish or if you need any more information. @Olof

Can you drop a screen here of that panel?

Here is it @Olof , but that won’t show how the number changes tho. That would have to be seen live if i send the save or record it happening. 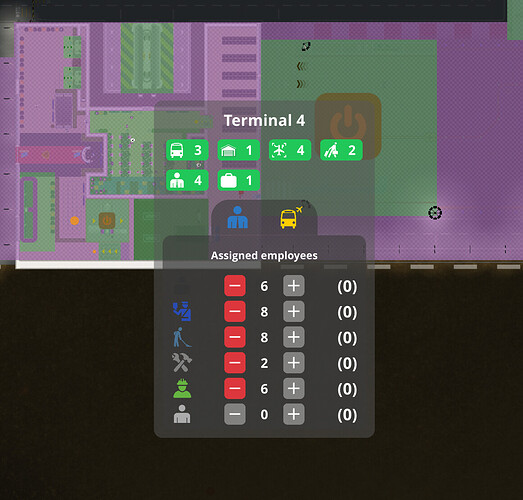 Is there a walkable path between the terminals?

Aceo 22729×637 155 KB
These are floor 0 and 1. At least there is walkway between Terminal 4 the small one at the bottom and terminal 1 That is the big above that is furnished.I do see i did not add doors on the terminals that is not operational will do that now!! Also will add walkways on the outside. But you can still walk on the 1 floor.
Megahenrik March 5, 2021, 8:33pm #10

Also like i reported today in the bug. I’m seeing the construction on floor 1.

@Olof added walkway on the outside also and door ways from the outside. No change.
I do have another question. Why is the escalators all red? Even if they are accessible.

@Olof Here is another probably path issue related thing. But i cannot figure out where. This visitors are trying to get somewhere. But i don’t know where, So they loop. They leave the seat. Take two steps and then sits down again. Over and over. As soon as i take away the terminal zoning. They walk where they want to go.

I stand corrected tho. Even if i take away the terminal zoning they still loop. Hmm.

What I think happens is that the ramp agents try to move to the other terminal you assign them too but fail making their way there, and are then automatically reassigned to their current terminal (which is a security measure).

I will test this.
I want to mention the game does this with every group. Not only ramp agents.
So to test this i should make sure they need to reach a staff room in the other terminal?
But the thing is. I want to make them not being assinged to any terminal untill i know what terminal i want to put them in?

Okey, i see the point. Becuse i don’t have a staff room that is outside a terminal zone. They have nowhere to go, and they can’t just roam so i made a staffroom outside the terminal zoning. The game still throws them back. But a after a few times pressing the number down to 0. It seems to stay at 0 or go up to one. @Olof

Can confirm it works. They all went to the staffroom i made that was outside a terminal zone. If i press the number to 0, the game still kick back two or three, and then i press the number to 0 again and it stayes there.
Thank you for the help. I do still have some visitors looping. Some of them stop looping but not all. @Olof