Am I doing something wrong?

Where are you located? Maybe the closest international destination is out of the range of medium planes.

I’ve my airport located near Tromsø, Norway, it is fairly North of the map, but not unreachable. But it is kinda solved. I’ve now added another Airliner (SkyFly) and I get 1 medium international flight now. So maybe more to come, try to get some extra airliners, but these flights sure don’t grow on trees.

Edit:
If it is the location I choose, which depend my limitation, which would make sense I guess, this somehow needs to get explained better when choosing one. Like for example in CS, you can see on each map how much connections there are and what kind of resources, something simple could be done to explore the amount of regional, national or international flights there are in that area.

Is this true @Olof ? Does the location change the flight availability?

Does the location change the flight availability?

What we need is an ingame overview of the planes we have in the game. Showing next to the size details also the max. capacity, the max fuel tank and of course the minimum and maximum distance.

Last one would help to determine if that kind of aicraft ever reaches another country.

(… But somehow I have sometimes A320 flying to the Chinese border from Europe.)

As jasper says it does indeed change availability. There are multiple things weighing into the flight generation but I agree that a well rated medium sized airport in northern Norway should get some international flights. What is the spawn rate like now?

Would there be any viability in an option to allow players to create their own destination tables for the game to draw from, rather than just assuming connection to the nearest large country. I set up an airport on St Helena and am finding the destination options less than realistic, especially as there should be no domestic flights at all.

The devs already added a Country-Tag for modded airlines with the intention that it might be used somewhen to generate a more realistic routes. We all hope, that it would be somewhen used.

Regarding St. Helena, that airport seems to be missing in the Airport list. That’s why the island might be recognized as a different country.

Ingame in the dashboard, click on your CEO’s picture to get some additional information about your airport location, can you post that as screenshot here?

Later I can collect some data for Saint Helena Airport so that you can add it in the airport list manually.

/Edit yes, Country SH is available but no airport is in the list. I will add it to my list later.

Manual Updates of AirportData.json due to recent/upcoming changes around the globe Modding

CONTENT OBSOLETE … Implemented in BETA 8 If you want to update your airport list manually due to some airport changes in the last months or upcoming, you can do that by editing the AirportData.json located at your Steam Games installation directory. (SteamApps\common\Airport CEO\Airport CEO_Data\DataFiles\GameData\JSON → AirportData.json) For Windows: There is a free JsonEditor in the Microsoft Store. You can also use Notepad or Notepad++ but the formatting is cr4p there. BE CAREFULL AND CREA…

So I’ve 5 airliners now, only 2 of them spawn large aircraft. 3 of the airliners (including both large plane spawners) each spawn 1 international medium flight at a time. So only if the first offered flight is completely finish, a new one gets spawned.

I don’t really care if its low or high at this point, meaning, I’ve chosen this location, so I accept the characteristics of it. But when choosing a map, you get these characteristics presented, only there are things like atmospheric pressure and humidity that don’t do anything for the gameplay. Information about flight demands would be useful in my opinion.

@NoPro
Here is the screenshot, but as I mentioned before, there could be some additional information about flight demands. 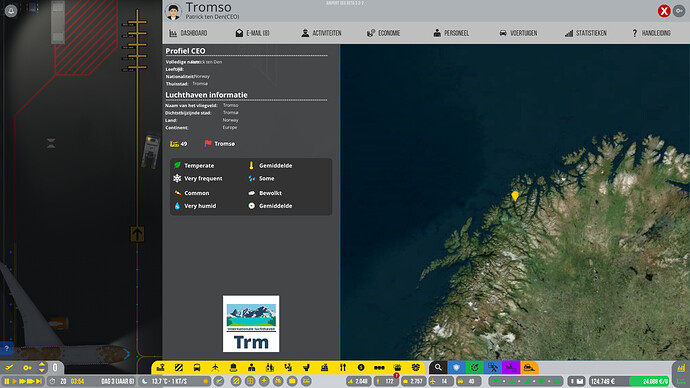