Currently the autoschduleder does its best to put flights in giant blocks that all land at 5AM and then are separated by minimum flight separation among that stand. This leads to giant walls of flights with as many flights as possible all scheduled for 5AM. (this example assumes no night flights). This means that every flight landing and leaving is trying to do so at the exact same time, leading to huge congestion, lots of delays and tons of wasted time for everyone. If you don’t want to spend your entire airport on additional runways you are forced to manage every single flight at every single stand to have any kind of traffic flow.

The obvious solution to this would be to have the auto scheduler space flights out not from the end of one flight to the beginning of the next but by spacing out landings and take offs by 15 minutes instead. It also seems like you could add a way to land multiple planes at once if you have multiple runways, say have two flights at 5AM, then 2 flights at 5:15, by adding a “number of simultaneous flights” function for multiple runways that would allow planes to take off or land next to each other. This seems like a workable solution to me but I don’t know the games code.

It would also be nice to have grind lines on the flight scheduler, as it is the markings at the top don’t help at all.

Setup a “trapped” first row each time when you build new stands, then the “trapped” system will keep up when repeating flights are planned by the auto-planner.

I have no idea what you mean, if you have to use quotes around something its probably a good idea to explain it.

I have tried spacing flights out manually and then hoping the auto scheduler would stick to my schedule but it went right back to walls of flight as soon as I stopped paying attention.

I have no idea what you mean, if you have to use quotes around something its probably a good idea to explain it.

Normally, when I set 1 row with an interval between stands, the auto-scheduler will keep the same system active. (This example is a manual old setup, but it works the same for me when I create one scheduler setup.) For this to work, it requires to have night flights procured. 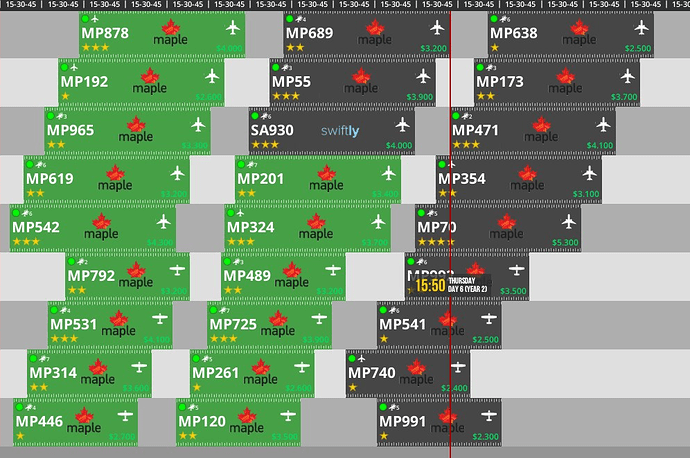 The autoscheduler will be improved in the future.

Would definitely be great if the autoscheduler knows how many runways you have and make a schedule based around that.
(and not have 10 flights try to land at exactly 5AM on just one runway)