How to get PAX to board their flight in time?

In my newest airport I encounter the problem, that the time-windows for certain actions just seem too small for a turnaround process. I got PAX boarding the plane just being left out of the gate as pushback kicked in. The ramp agents did not finish the loading of baggage and I miss out almost 1/3 of the passengers trying to board. What could be the reason for this? I play at 100% plane capacity and on a medium stand I might have to handle 100-120 PAX at maximum. Load trucks are assigned to stands, there is a jetbridge and I even assigned a small and a medium boarding desk to cope with the numbers. Still, always persons are left behind. They are in the waiting area in time and I have a big surplus of airport staff although the latter do not use the designated staff room near the desks. The desks are directly at the jetbridge but still they seem to be unable to show up in time. Security runs smooth, there are enough check-in desks - I am frustrated. How is this supposed to work with big planes even if I cannot get my medium flights to take all bagage and PAX with it?
Also, what is a healthy number for baggage trucks per baggage bay? Sometimes they clog up and freeze my whole operations.

How large is the airport? I’d recon you to include a few screens so that we can review your layout. 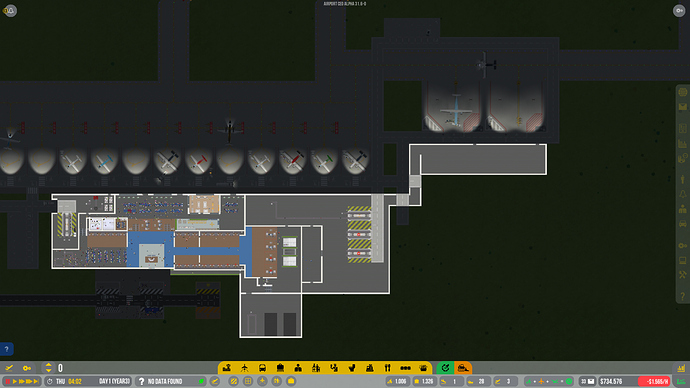 The PAX boarding the medium stands enter the building at level 0 at the bus stands. The right row of check-in desks is dedicated to the medium flights via baggage handling system - only medium flights turn up there as the smaller ones are handled by the baggage bay on the left.

After check-in, they can go upstairs into my level 1 waiting lobby and - in time - go to their gate w/ jetbridge to the east, where with 3 small stands at the entrance and seats I could imagine this will work. 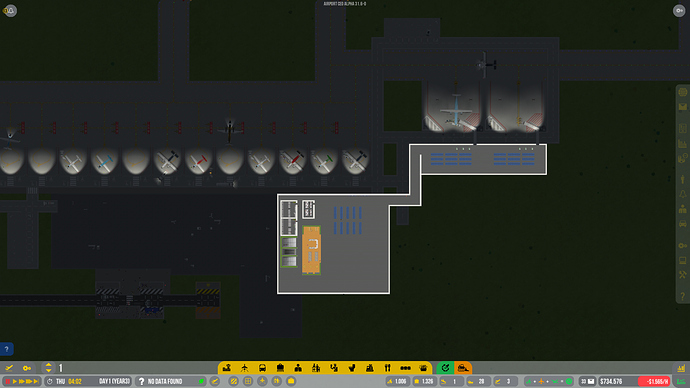 The GA is not interfering with the CA flights as it has its own runways.
The car parking lot near the medium stands is dedicated to a fuel truck and both belt loaders, baggage trucks and push back trucks are deployed to stand to avoid delays or leaving to do something with the small stands.

I am a bit confused.

I’m observing this issue too.

Of course mine is a huge airport, but I can see pax idling around near bus stop/metro until check-in opens. So they had enough time to walk to check-in, but they don’t do.

So if they would go to their check-in desk directly after arriving (as in RL) even if it is still closed, there were much more time for the next steps…

Started a new airport and the problem still occurs. Now, 4 out of 5 passengers could not reach a plane rather directly located to the main building. Is the timing wonky? Sent in a bug report with screenshot to have you take a look at it. The airfield is kept minimalistic and yet…boarding started and only 1 of 5 reached the goal before takeoff with a rather small way to walk. 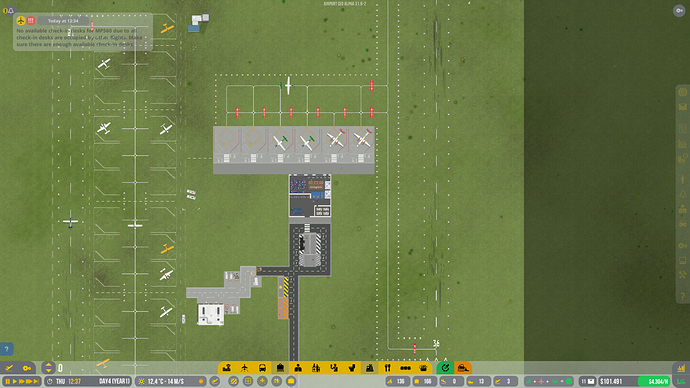 See? The paths are too short to assume the PAX have to walk too far. It is simply 5 people needing to get from the main building to left CA stand and only 1 manages to do it in time.

Like the message in your screen you’ve got too less check-in desks. If your PAX has 3 hours and needs e.g. 2 hours to go into the terminal, visiting toilets, shops or cafés, waiting for opening of the check-in desk, going to the open check-in desk, walking to and through security entrance and boarding the plane and the check-in desk opens e.g. 1 hour too late because it is blocked by another flight, your PAX can reach their flight just in the minute of departing. Maybe 1 passenger will reach the plane, but not the rest anymore.

This is dependent of the number of stands I have and not of the number of passengers processed there? I always believed that a check-in desk - without warning me I have too few - is enough to deal with 2 small stands, if the flights are not placed on the same timestamp. And, frankly, we have 10 minutes for processing 5 PAX. I still fail to see how this can be too few. 3 hours are enough. They should be able to enter, go to the loo and have a coffee and still be in time.

This is dependent of the number of stands I have

Yes, that’s right. I build one desk per stand.

But not, if the PAX is waiting 2 hours until the check-in desk opens after being blocked by another flight.

Maybe I’m wrong, but it’s an easy try for you

Well, I set time between flights at 10 minute so that 3 stands have 30 minutes of time to process something between 5-20 passengers until they need to open for another round of flights. But then all 6 are full and we have 2 hours to recuperate from this. Observing them, they enter the main building quite fast in fact. They just hang around too long in the main building and seem to start boarding too late. I might err here. But it does not make sense in my book currently. Maybe I might close 3 stands tomorrow and watch things unfold. But still, if it comes to one check-in desk per small flight, this is not really comforting.

And mind, that in the example above I have 16 check-in desks for 17 flights - this should not make a huge difference as most flights are small ones with few passengers. Before 31.0 This never was a problem - I always had slightly less desks pro stand and it worked fine. Thus I wonder, what might have happened. I thought about the medium stands being in first floor instead of ground floor, but as you can see, my test airport is on same level and has short ways from terminal to plane. 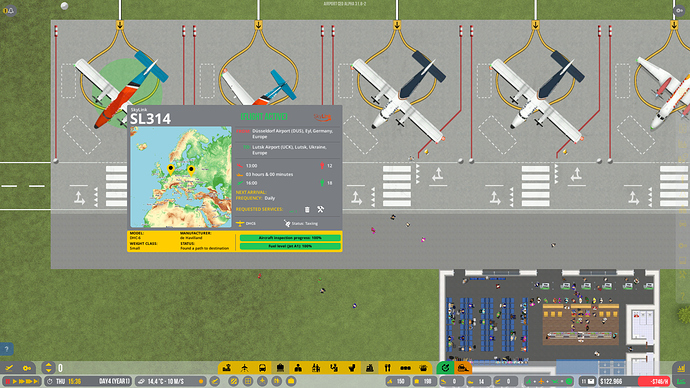 The flight in question is SL314. It will depart at 16:00. I followed my PAX closely this time. They arrived about 1h before the flight even landed on my RWY. Check-in was at 14:00 or so and went smoothly for all 18 PAX - done in 10 minutes max. They were waiting in the hall until 14:57 when the boarding desk opened in time.

They reached the plane and boarded regularly until 14/18 were aboard. Then suddenly, boarding ended and the 4 PAX highlighted were left at 15:32, so 28 minutes till departure. 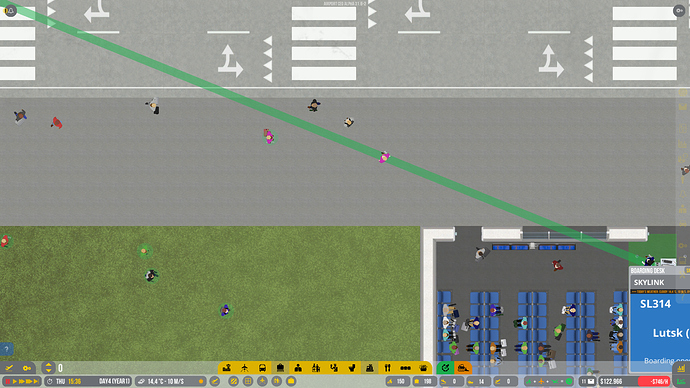 I have a suspicion about this. I am playing with 100% passenger per flight ratio while my old airports used 50% ratio. Could it be, that internally the plane is ‘full’ as under 50% rules so surplus PAX arrive at airport but are sent away. Something like under 100% PPF ratio a DC6 will unload 18-22 passengers and has a likewise capacity in its description, but will internally accept only enough passengers as if under 50% PPF ratio which would be about 10-14? I do not know, how the game checks the planes for being full, but let us for simplicity’s sake assume, that it just counts the PAX boarding and compares it with a number in some data file for the plane. While the flight description reads that 18 persons will board, the internal number was not changed and is a 14. So while the game correctly spawns the 100% number of PAX, the plane only will accept the reduced numbers as the plane is full too soon. It is like the PPF ratio affects the number of PAX spawned by planes and world, but the instance that checks whether all PAX are aboard uses another number different from what we see.

I went back to my airport and removed the boardwalk and extended the terminal to reach the stands. First reaction: The stands switched from ‘remote’ to ‘connected to terminal’. Each one got its own small section and now everything works. The seemingly small ways to walk still are too far away for the PAX to board in time. Or the plane still departs too fast. 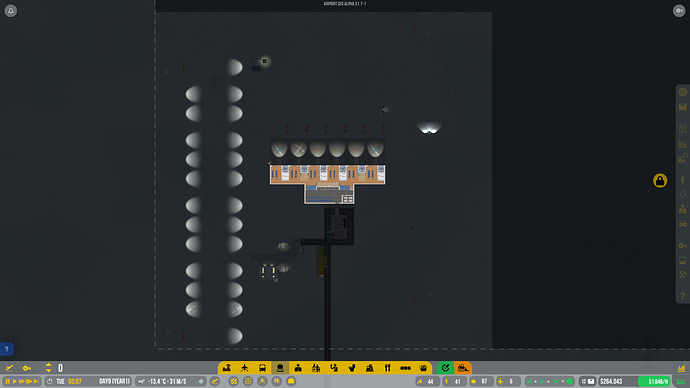 I did not encounter the error in the next flights anymore. Everything works smooth now. Obviously, I can learn from it, not to put too much space between boarding desks and stands. So this might not be a reproducable bug at all.

The airport is small, but profitable. I think, I will build a small baggage handling system to finish it off. No real need for medium flights. 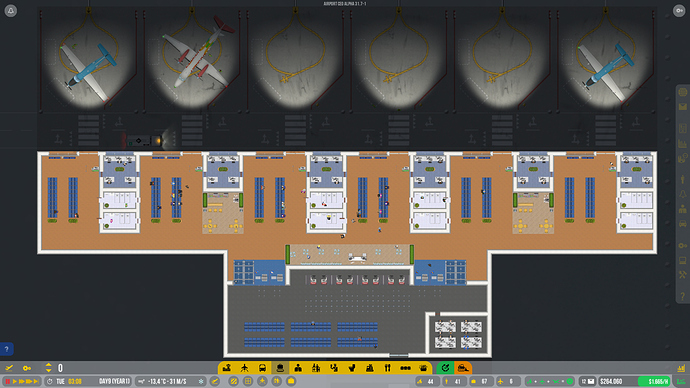 These are the renovated waiting areas. I put some small staff rooms for ramp agents and service agents only in between and it works fine.

The point is: the stands are remote, but the PAX went there by foot - I placed a walkway.

Another thing happened though. 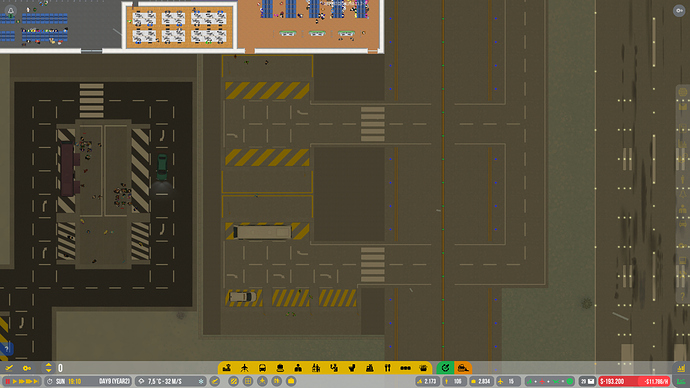 I placed 3 medium remote stands to round up operations and the strange thing is: although the walkway is secure, I only had the right door first. PAX landed and were stranded and did not find their way back. Only after opening the left door everything went smooth again. No PAX ever used the right door although being flagged as secure zone. They directly wanted to go to the bus stop via terminal and from there they can wander to the others. But no, not the right door. It caused a heck of a problem. Even worse, the PAX boarding the flights did not use the bus, but ‘ghosted’ through my airport passing through zones, walls and walking on the taxiway.

Pax walking to remote stand, instead of taking the bus? If this is reproducable, a bug report would be good…

@Nickjet: Agree. And furthermore, buses do not calculate how long their path to stand will take. So if all pax are in time, buses will always leave at exact the same time (30min before takeoff?), even if all pax are already in the bus and the trip to stand needs more time (e.g. 35 mins).
This is one of the very, very old bugs. Makes remote stands only useable near terminal, but remotes on outer airfield are always massively late.
At least at all my airports with remote stands.

I did. Unfortnately, I forgot to write down the issue number ACEO-XXXXX. Any chance to recover it from somewhere?

If you haven’t start a new game yet…

Or you make a search in Jira, search for the header, if you remember, or for your computer (name/specs/graphics/…).
If devs have already looked into it, you should find it. But that takes several days or even weeks, sometimes…

New here (and to the game within a few days) but it’s been great to come across errors and then search through here to see if I’ve done something wrong (quite likely) or if it’s a bug, which leads me to this thread:

I’m definitely having similar issues with pax delays when it comes to boarding at remote stands. It’s not only remote stands - all of my 8 medium stands connected to Level 1 with jetways still incur some delays due to pax taking too long to get there. In some cases I can see that it’s a long walking distance (which I’m part way through rectifying), but it’s interesting to read some of the thoughts and solutions you have @DocDesastro & @sirhc80.