How do secure and staff zones work together?

My understanding was that staff zones could effectively act as a bridge between a public zone and a secure zone that only staff can pass through. So I typically build a staff area behind the check-in counters (I don’t know all the ins and outs of real airports, but I do notice the doors behind the counters that staff are constantly going in and out of) so that staff can efficiently reach their posts on either side of the secure zone barrier. However, even staff need to be screened to be allowed in secure zones, which means I have to build a small security checkpoint on the other size of this area and a secure zone exit. I don’t know why, but this just seems weird. 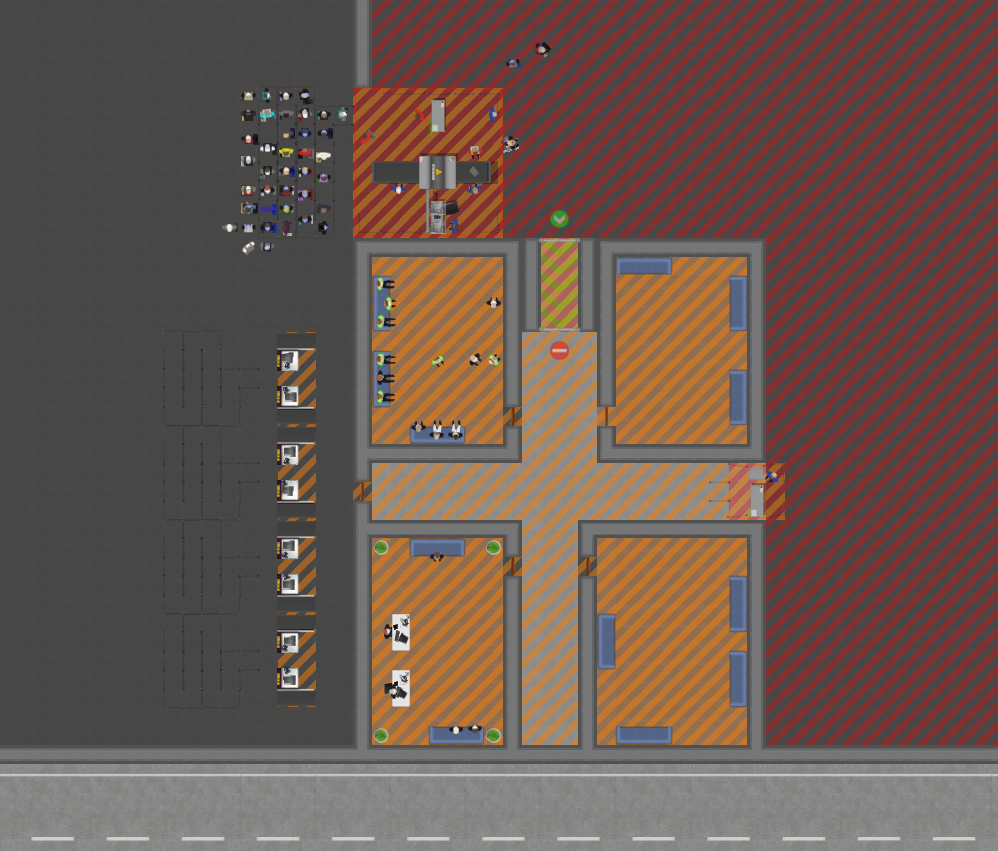 I have managed in some cases to circumvent this by keeping the staff zone at one edge of the terminal so that certain staff like ramp agents never have to enter the secure zone (I didn’t really plan for that in the above airport), but I think the issue with my previous airport is that staff have no way of getting back into the staff zone from the secure zone without going all the way to the passenger exit.

Do we really have to use security checkpoints and exits or should staff be able to freely move between the two zones if they are overlapping?

You really have to

i agree that for employees there might be a more convenient object that allows travel in 2 directions though.
Perhaps someone working at an airport could divulge how this works in real life?

I’m guessing they probably have swipe cards or something. I think a staff door would be a simple two-way solution.

Maybe something changed, but when you build a 2 doors, on both sides (secure and not), they pass through anyhow atm, not?

You do know you can zone staff zone as secure zone as well?

Personally, I prefer having different security layers though.

I know, but that still means putting in a security checkpoint, and I just think that looks weird.

You don’t need a security checkpoint/exit to connect staff zone and non-staff zone inside a secure zone. Just imagine it as the entry point for your staffs.

I mean, I used to work in a secure factory (must be heavily secured by law), and every car that gets checked in and out must be thoroughly inspected. And then, the production and storage area also have manual inspection for bag, clothing, and sometimes physically as well. I imagine airport security being tougher than that.

I guess what I really want is just a smaller exit.

Typically I get the staff just using regular exits along with all the PAX. But then I have my staff rooms located close to that exit, with a small security check point back into the secure area.

From what I’ve heard too (my niece works at an airport) they do have to clear security when the staff move from the check-in desks to the boarding desks. 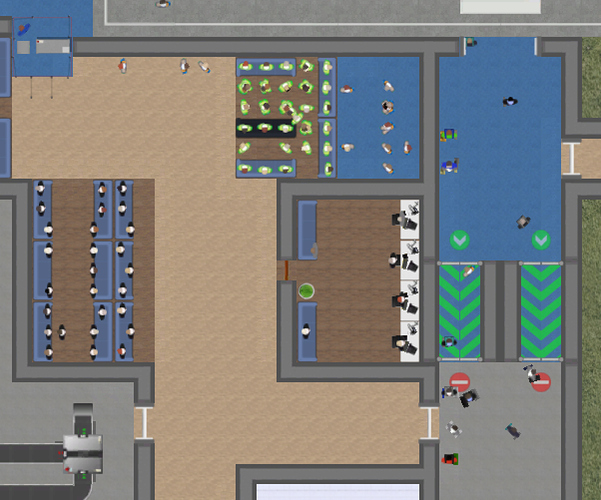 At Gatwick the staff have a number of entrances/exits to ‘airside’ that are staff only. Staff can also exit through the normal passenger channel at Customs. All staff, apart from armed police (because whats the point?) and emergency services on a shout, still require screening.

Staff rooms are located all over the airport. Some for ramp. Some for security. Some for handling agents.

In game you can zone an area secure AND staff. So it is just a staff zone ‘airside’

At the airport where I work I can go airside or security/customs areas etc any time I want just by swiping my security card on locked doors…
HOWEVER that being said, if I wish to go to Domestic departures or International Departures, I have to go through security screening just like the PAX.
There are some areas that during the night I have no problem swiping and going into, but once screening opens those areas are locked down and to go into them I have to go through screening.

The game is quite realistic in the sense that staff who work airside (i.e. have cleared the security section of the airport) need to go through security themselves. If they are non-airside (for example work the check in) then they don’t need to pass through security, although they would have a pass to let them enter staff only areas.

The rationale is pretty simple - all employees can’t be trusted; if a staff member was able to get through to airside without being searched, there would be a huge incentive for criminals to use them to pass contraband onto a passenger (your hand luggage is rarely searched once through security either at the departure airport or the arrival Airport). Similarly terrorist could look to exploit this is the same way; either through recruitment of a member of staff or by applying and becoming an employee themselves.