How do I fix "An employee can't reach it's work position!" and "A person can't find a reachable secure area exit!"

Hi! For some reason, some of my staff members aren’t able to get where they need to be. Here’s a screenshot of the errors I’m getting. 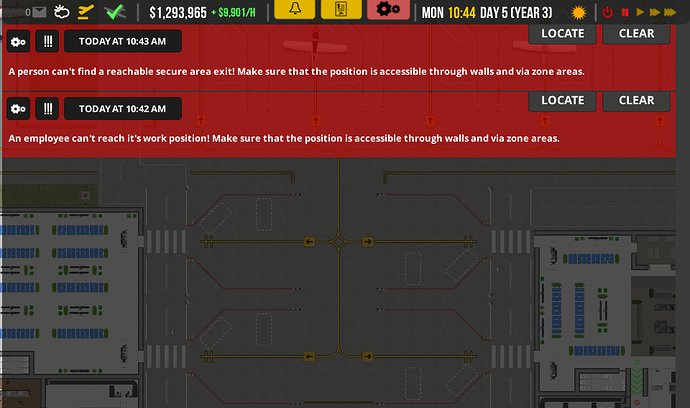 Also here is the layout of my airport.

I have tried reloading the game, but that hasn’t worked. I have also tried to place more security checkpoints and exits. As well as connecting the two terminals. That’s what that long hallway is for. Anyways, is there a way to fix this?

And now my passengers are going through the tarmac and the aprons. I’m definitely getting the safest airport of the year award. 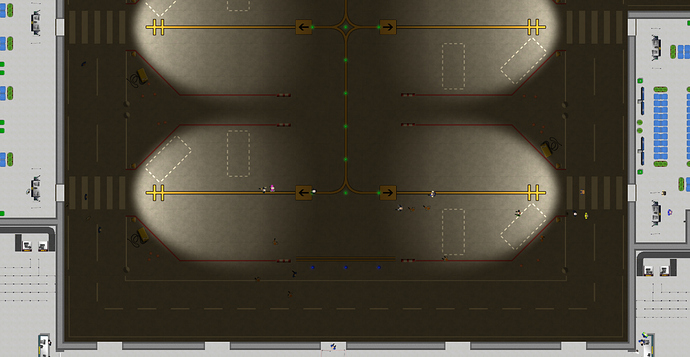 Welp. I just ran into a bunch more glitches. I think I’m going to file a bug report now. @Olof @Fredrik Get ready for a bug party in this game save!

Unfortunately, that wasn’t the case for me. Thanks for the suggestion though.

Nevermind. There was no hidden secure area under the ramps, but now the passengers are not going over the tarmac. Thanks for the help!

I see no baggage reclaim area. But I see a corridor on the right. If that is your baggage reclaim area,then pax exiting the left terminal can’t reach it, because the can’t go to another secure area as they don’t have a boarding pass. Therefore they can’t find the right exit.

Well,it makes sense in my head,not sure if it’s all logical or that my assumption of the baggage reclaim area is correct.

Oops! My bad. I forgot to show the baggage reclaim area. Here a picture of the entire airport. 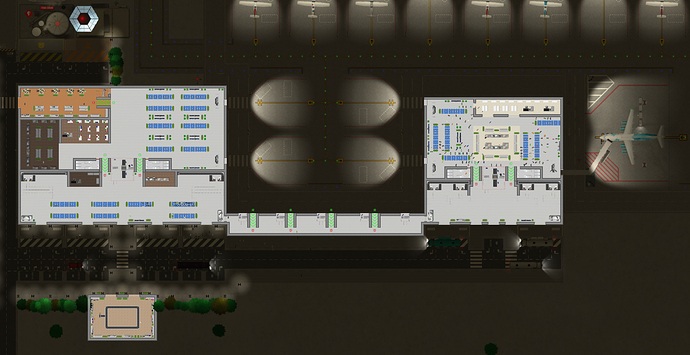 The little area on the bottom left is the baggage area. Here is also another screenshot of the whole airport, but this time with zones turned on. 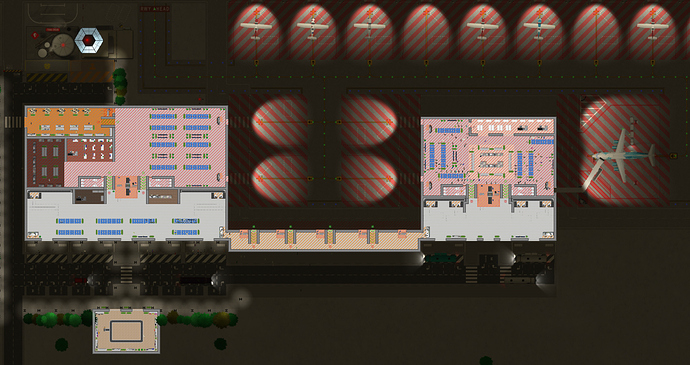 And yes. I know that the whole baggage system in my airport can be better. I just haven’t gotten around to it yet e.e

The bottom hallway of security exits you are right is staff only. That hallway is there since I thought that adding that there might solve the issue. For the passengers, I have a total of 4 security exits. Two in each terminal by the passenger security checkpoint.

Hmm. For some reason when I do that I get the passengers crossing the tarmac problem.

I added some queues to the two passenger security checkpoints. It seems like the issue has been fixed a lot. However, I have still gotten these errors messages a couple of times after implementing the queue.

Why dont you have zebra’s at the employeet entrees in the bot?