I know that this feature has been requested, but i want to show my thoughts about it. First of all, you need to select a main airline. You can have more that one. And if you have one, it will be 20% of all flights or you can just set the frequency to normal airlines with my tool (Idea) Ideas pack (Idea 2).
You don’t need to set the main airlines only for frequency, you would be able to do this with my imagined tool (maybe in future.) I think that main airlines should be allowed to store planes in hangars with foundation and the hangar tool. 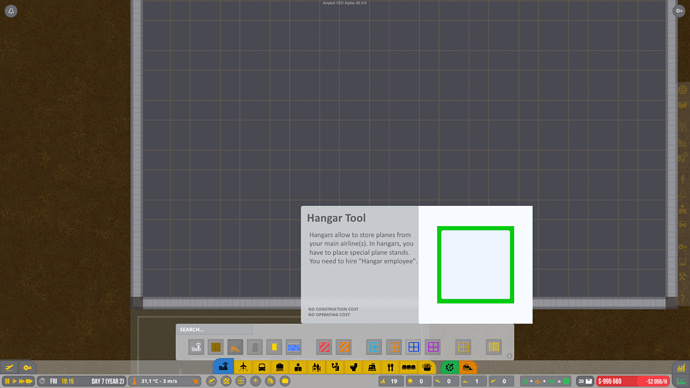 It would also bring new type of employees: The hangar employees. they would take care of the planes, help with rolling them inside. Eventually inspect them. 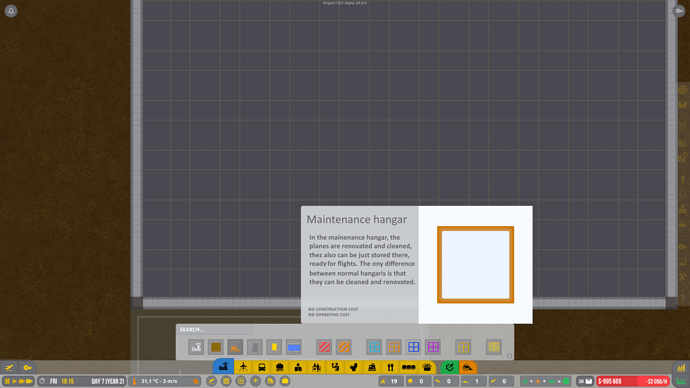 Well, general task of hangars is to store planes which are not in usage.
What do you think about it?

Cool art, and pretty simple idea! I like how you put it.

I know its off topic but 29 thread closed means 30 is very near ?

You mean version? I don’t understand.

Why not just a building (like a depot for large sized aircraft or just a patch of dirt for GA)? That sure simplify the programming, since building a zone-based system maybe too complex (size variations, etc.).

And there’s a problem, the stand is already simple, just place and operate, yet new players still struggles with the staff, baggage, and other myriads of problems. A hangar which uses zoning system maybe a bit too much.

Yea, it is a hub system, it sets the frequency (in my idea) to 20% but i think you could set the frequency however you want. But i want for planes to wait. For example, they fly to my airport, and then they stay at hangar 3 days (more or less) and then go to gate and fly. And maintenance hangars will clean and renovate them, so that will improve the satisfaction very much.

Great idea, the user drawn hangar can be handy.
Just some note, this feature shouldn’t only be reserved for airline aircraft but reserving one or a place in one for airline is a great idea.
Also for smaller aircraft maintenance can be done inside regular hangar while bigger ones need a maintenance hangar.
And rather than putting a certain percentage of flight to use it, it should depend on the planning for this aircraft, for example if a company don’t have another flight planned for days with their aircraft, they’ll want to store it in a hangar, and GA aircraft usually aren’t left outside at night.