Today, I would like to present my first steps in publishing one of my airports here in the forum. I was born in Mönchengladbach, Germany which is in the Rhine-Ruhr-Area western of Düsseldorf and north of Cologne. In the city a large GA airport exists which I have used as inspiration. They write, they are the 2nd biggest GA airport in Germany with only Frankfurt being bigger in that regard. Something to be proud of

. I located the airport to MG and started with a GA regional airport. I tried to keep my design a bit close to the original. Some things I cannot do as we do not have hangars which are there, but I try to place buildings at locations where a hangar would be. The original is described as GA airport with commercial flights on demand. There is a refueling service established.

Mind the main building being separated from the commercial stands. You enter the airport through the central doors, walk up to the information desk and get your ticket at one of the currently 3 desks. After checking in, the PAX will go to security and walk up to the departures building A in the southwest corner. Of the 6 stands there, 4 are already converted to commercial use from an old hangar building and modernized from scratch. The corresponding building houses toilets, a staff room with exec suite and has a small café to quench the thirst of the waiting PAX. Outside, there is another building housing staff like janitors, ramp agents and techs. AVGas100LL service has already established. JetFuelA1 has been procured and proper service buildings are to be built soon. 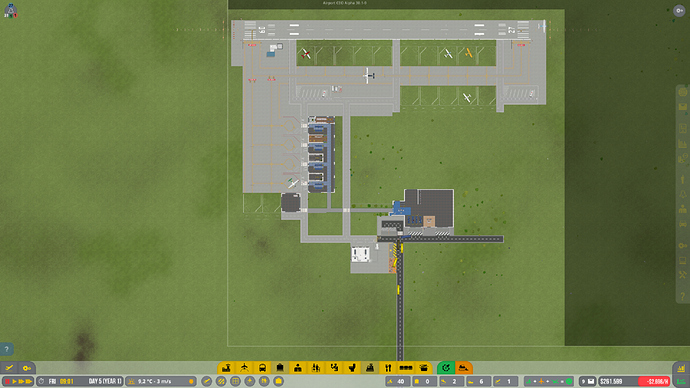 My closest goals are to connect the other 2 small stands at the commercial terminal A to commercial stands to get a steady income while not overloading my airport yet. Also, JetFuelA1 services will be established.

Middle-term goals would be expanding and plopping down some medium stands - maybe as remote ones first, since I have no expanded terminal yet. Also, I would like to have baggage handling enabled for stands A1 to A6 to offer premium services for my flights.

In the long run, I would like to have a second terminal with own runways doing the medium flights and securing a metro access.

I will expand a bit and post new pictures when I get to the right point. Any comments on my design? I could use every bit of help or advice.

JetFuelA1 facilities have been erected and terminal A has been expanded to 6 commercial small stands. This should provide me with a steady flux of income. I am torn about what to do next. Do I want baggage handling early, maybe a shop in the main terminal or going straight for medium flights? I guess I will play it slowly. Rome was not built on one day. 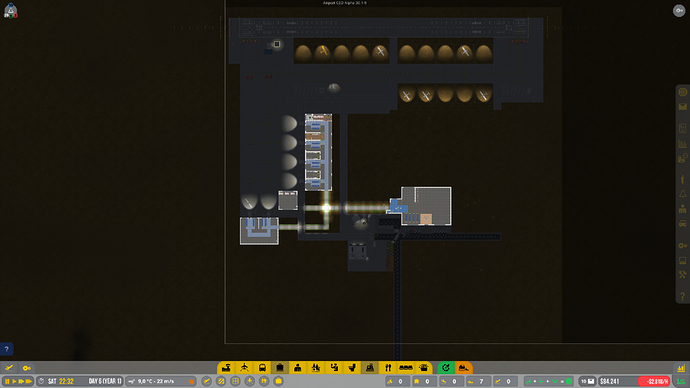 My next step will be the preparation for larger flights. I will add some ability to handle remote stands from terminal A while expanding my airport eastwards. To achieve this, I will enable night flights and harvest some money. If I want to keep my GA abilities, I would need another runway. I really would like to do this as it is in the spirit of the original airport which is used for training flights in many cases.

Work on main entrance phase 2 has been finished. After the contractors leave, everything looks a bit more cozy and shiny. 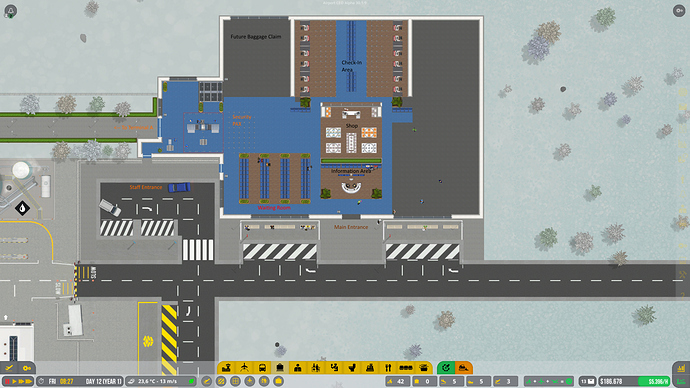 A comfortable waiting area for PAX waiting for check-in has been opened and a shop provides some things to take with you after arrival. A toilet for this building is missing currently, but planning is underway.

Terminal A in a close-up: 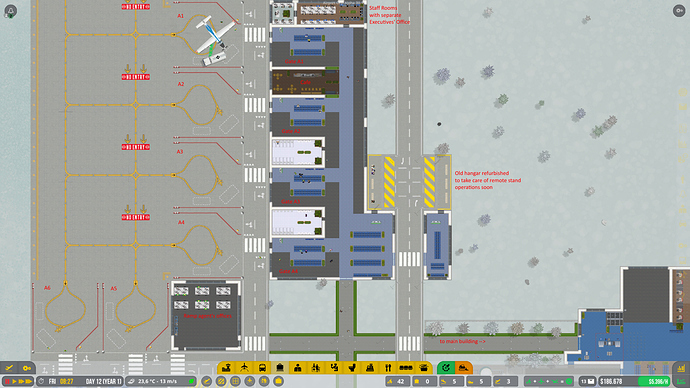 Night flights are in place now and I really feel the runway being under stress from 6 CA and 15 GA stands. I need a solution for this soon.

Loving it, personally like seeing those iterations from small to large, rather than starting big

@Jettuh: I guess telling a story is more fun than presenting the results. It is highly motivating

Next mark reached! I got my first medium flight. Signing a contract with OKAir more passengers will flock to my airport. 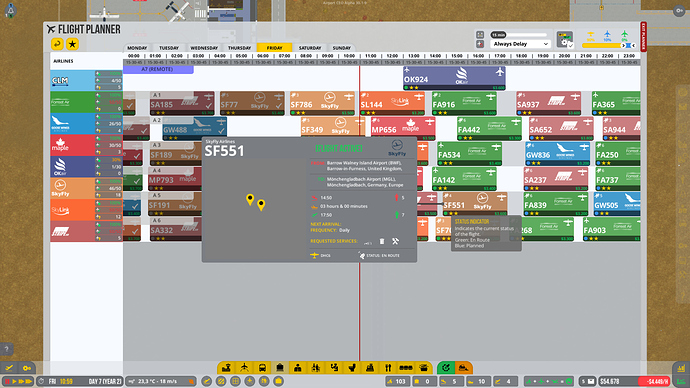 This is the current layout of MGL International: 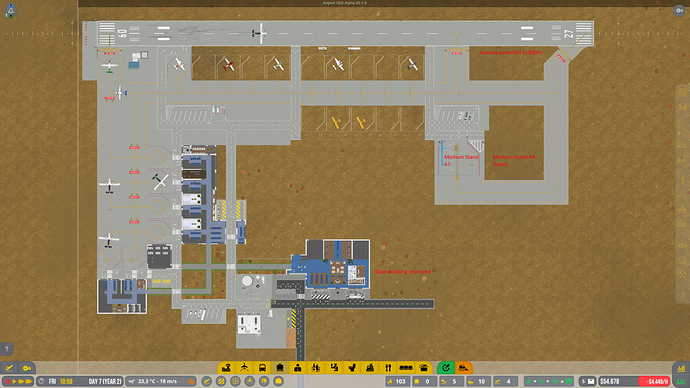 The improvement of the main building has made some progress. A café was added as well as proper toilets and a staff room for my airport staff and security. 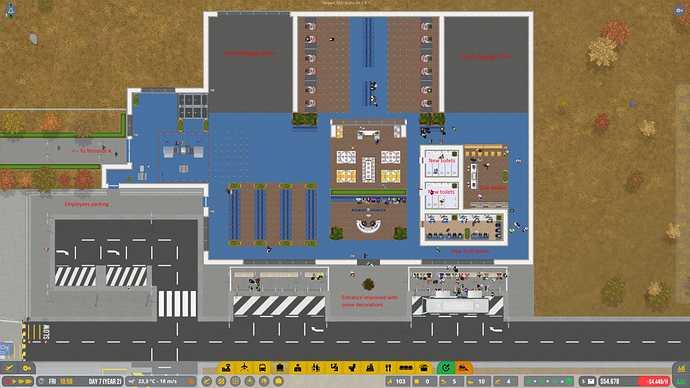 Awaiting the landing of my first medium flight 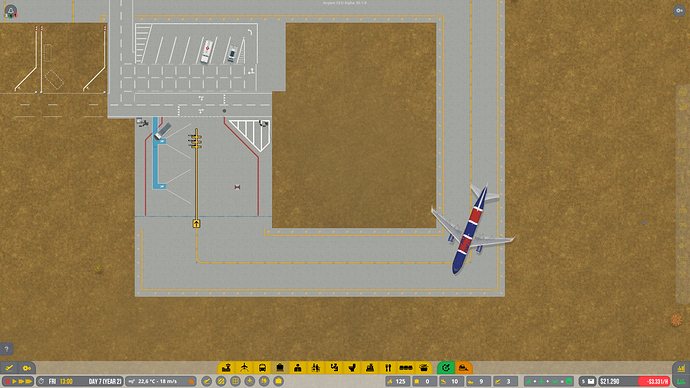 After expanding to two medium stands, baggage handling will be next.

And we are back!

Currently, 4 medium stands crank up the passenger numbers. Now I can think about having a baggage handling service. The remote stands are operating very well, but I am in dire need of another runway. 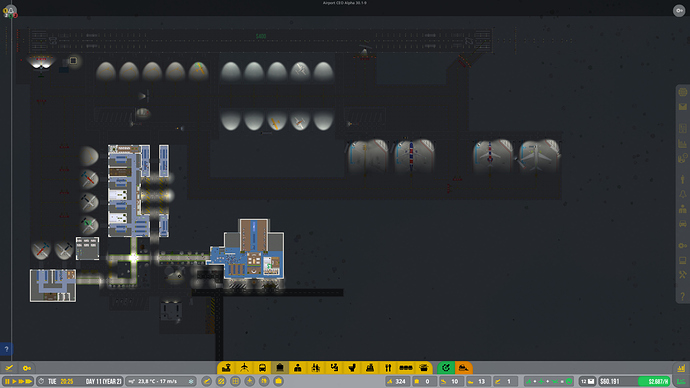 Also, my security entrance is reaching its limits. Need to expand this part of the main building soon.

I really like your creation! But is it profitable yet? I tried making a massive GA airfield once but it was losing money…

You need to include a minimum of CA stands, but yes, it will generate money unless you go too big. The ‘worst’ part was waiting for 750k for unlocking the square in the east. 6 small CA flights with night flying enabled provide enough money to expand. Going for the next mediums was rather quick. After the first, money is rolling in to feel comfortable. I started with 2M and took no loans whatsoever. I also spend rather a lot on decoration as you can see. The walk to terminal A is rather park-like. I would like to have flowerbeds and maybe an old Junkers Ju52 standing around there for people to watch. The original airport has a Hugo Junkers hangar with an exhibit of a fully operational Ju52 bomber. It sometimes does museums flights.

BTW.: seeing your nametag…has OKAir been inspired by you?!
I also want to convert all the GA stands to concrete as in the original airport there are no grass stands AFAIK. Call it a waste of money, but I like it that way.

Completed the cosmetical upgrades. Now it looks more like the real deal: 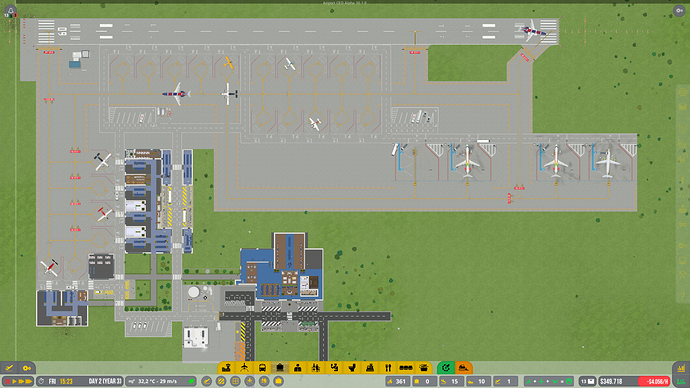 Next step will be a rather boring one: I need 1,5M for buying the rest of the land to have a second runway. One will do the departures and one the arrivals. Otherwise, expansion will not be possible. 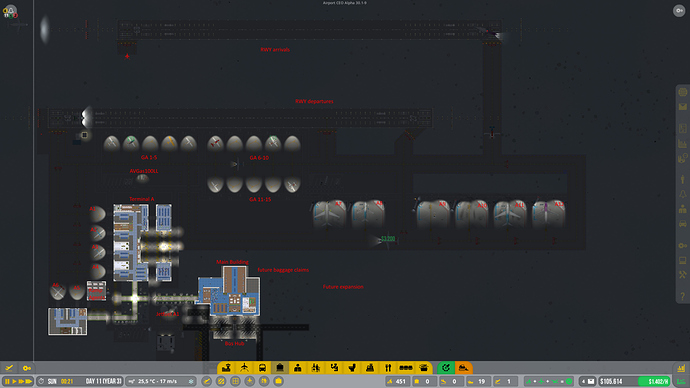 The second runway is completed and does the arrivals now while the other will be departures only. Operations efficiency has increased a lot. Terminal A has reached its maximum capacity with connecting the sixth remote stand on the old hangar area. 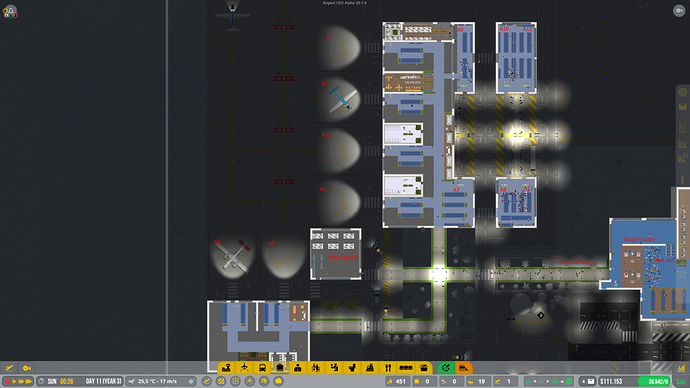 Next thing will be either baggage handling or expanding the main building eastwards resulting in Terminal B for medium flights only. As money is balanced currently, I guess I would go for more stands first to secure my financial situation. The shop in the main building is not profitable at all. Maybe I will swap it out for a larger restaurant - a merger with the café there.

Also, I found 2 medium security stands sufficient if not optimal for 6 small/6medium stands. Their workload is about 100% without PAX standing outside the queues.

My nametag refers to my country’s airplanes having a ‘OK’ prefix. Perhaps the author of OKAir was inspired by that as well.

Also, thanks for the tips about stands. I guess I always built either too much or not enough GA stands.

No need to thank me - I an no expert by all means.

The greatest problem is that the GA can really mess with your timeschedule as they come and go as they like. As long as you only have one single runway you will start to feel the pressure with as few as 6 small stands. Either build two dedicated runways for arrivals and departure (which I think is dangerous as you pay for it about 1000k per hour) or take care not to clog up your flight plan to have too much congestion on the taxiway. In my airport you can see that CA coming from terminal A might have a problem leaving the airport, if at the same time 5 GAs decide to leave and 4 to arrive simultaneously. Check your runway often to see how many flights are in pattern. Once you have the second runway things will go smoother, but this requires a lot more money to support such an infrastructure. I think that some things really should be rebalanced. Another help was to drop fuel prices by 0.1$ - this helps making the airport more attractive for the GA without hurting your wallet too much. Remember: Stands cost money to have them. GA only gives you 400$ for landing fee, 400$ for take-off and some 25$ish per hour parking and each flight hurts your runway for 2% (landing + take-off) which will cost you money to repair after 50 flights, so fuel services are required to make a small profit from it. GA is not very profitable so most throw it out while I keep it for fluff’s sake.

For instance: why do we pay 100$ for a service car stand? The car itself costs hourly money (another 100$), the ramp agents transported do, so why does a lump of concrete require such an upkeep? Is it made of marble and polished by dedicated artisans every 15 minutes? Too many things have an unnecessary upkeep, like fences. Buy them once and if they break - well repair costs money and the service tech does as well. Early game is all about minimizing costs so small buildings, small taxiways, minimal things you pay money for. Do not expand too early and too quickly. Why are we to pay a fine if a shop does not meet its financial goal? We only rent the space - the rest is enterpreneur’s risk. Better would be to connect the star ratings not by size of the shop, but with average PAX present in airport. I guess I will do some posting about this in the proper section of this forum.

Another hours passed and Terminal B opens up for business! Now things get rolling. 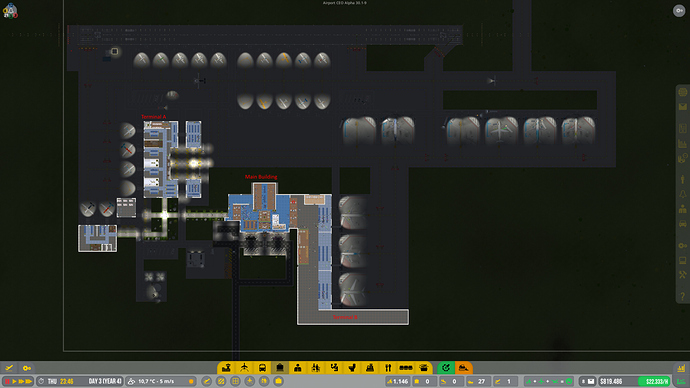 Some time later baggage handling is opened at an old hangar in the middle of the airport and Terminal B expanded to have 6 medium and 2 small stands. Terminal B is the first one to have baggage operations active. 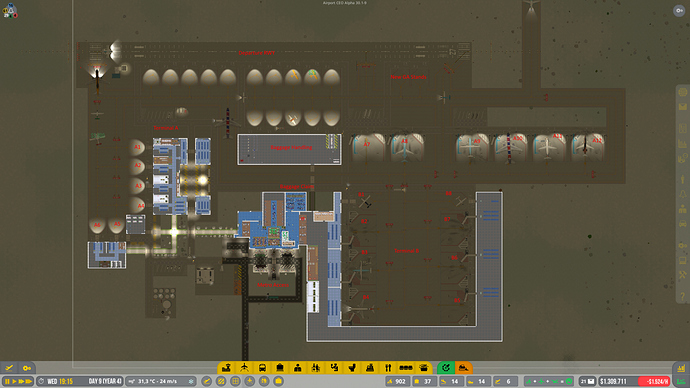 In the near future I am planning to have Terminal A access to baggage handling as well.

I agree about the upkeep costs. But speaking about them, isn’t the metro station ridiculously expensive to operate? I think the tooltip said it costs 5000$/h. Or perhaps I read it incorrectly.

That is the point. I do not think it is an hourly cost, but maybe per day - my balance did not shoot through the roof because I built one. Vehicles are paid per hour and are over-proportional expensive. The game is somewhat in-transparent on that. Even then, usually the Metro is operated by its town so the costs should not lie with the airport and IF it were our metro, we would get revenues. Just this flat 5000$ cost is rather inadequate.

Well I’m sure the prices will be improved eventually. Perhaps having the vehicle operating cost based on it’s usage instead of a fixed cost per hour would be better.

@DocDesastro very nice build! Isn’t it the best to start from scratch and build slowly but steadily?

Looking forward to enough time for another project, from small to multistorey airport

Very nice work. I’m from Mönchengladbach, too, and my first Airport was also MGL, but tbh, my design is not even close to the original MGL Airport.

I think the layout is great and wish you good luck on your future plans.