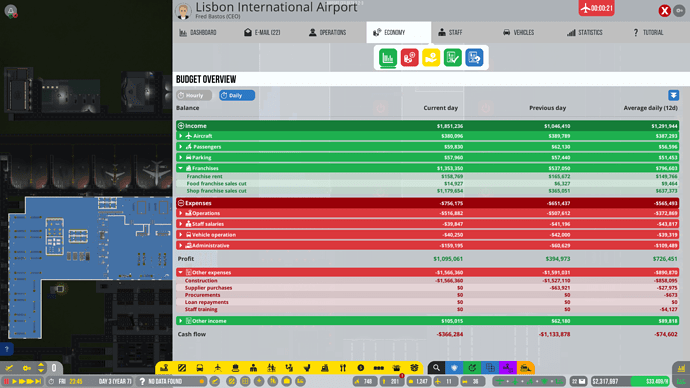 I have noticed a LOT of things dont work correctly at higher game speed. For example running at regular game speed i almost never have delays or a build up of jobs for staff, but soon as i go into triple game speed it breaks down. In fact i have watched my construction workers work at regular and fast speed and i swear they move slower per minute at fast speed.

I have brought this up a few times and never gotten an answer from anyone about it. Honestly, i figured it was something that will get cleaned up in beta and not be a problem, but it breaks the game if it doesnt get fixed, as there are long lag times when raising capital you cannot push through.

ive taken to running it on slow speed over night to build up cash on airports.

It’s a shame and it gets boring running the game at speed 1.
please fix this

Some adjustments have been made in the past, but there are indeed some issues still there I see for myself as well. Please bug report these issues with examples and if possible with before & after scenarios, so the devs have a reference. With ‘before & after’ scenarios I mean that you know already that certain things will fail because of 3x speed as you have played along but did not save the game yet. In that case, reload the latest saved game and report what will happen if they run the game at 3x speed, so the devs can check the behaviour in your save game. Also please mention in your bug report if the save game came from an earlier version of the game or if it was a freshly started game.

Increased game speed also depends on the hardware performance. I have cases where some large planes miss the first runway exit when running in max speed. Also the planes take wide courves and end up not straight at the stand. All that wasn’t when I was using my old PC.

But: I don’t have delays so far, it is still possible to handle all flights on time.