Hmmm but the question remains on how much is enough in terms of micromanagement.

Sure, I believe the devs can implement arrival, gate allocation, and departure separately, but scheduling them for, for example, 10 flights? That would already means juggling 30 different timeslots. Not withstanding the addition of day-specific scheduling.

I also disagree a bit with your last example. Just because it’s not charged, does not mean it’s not managed, especially since takeoff and landing is intertwined. That being said, I’m not advocating that they must be in the game. It depends on the compromise we make.

I love micro, but i can imagine that there are those who do not. I can’t wait to see what the devs and this community come up with

That’s a pretty pessimistic outlook of the game’s performance - that an average computer won’t manage more than ten gates!

Well, that’s why they launched EA: to test the limits of the engine.

If each row is a runway how would that work? At LAX for example flights land around 1 per minute or so. With flight turnaround of 2 to 6 hours, that would massively overlap the planner if you ran and airport with even a small number more gates than runways.

I think it is sort of the current system, but the rows are totally for the user to overlap times. Since airlines dont require a time range, it’s up to us. You could have 6 gates but 1 row if you made no flight overlap. Seems you could have infinite rows if you wanted, but realistically should limit to total gate number.

Regarding micromanagenent, any player who plays this genre, or even specifically Airport i don’t believe will be overwhelmed by gate assignment in a flight planner. SA already does this, and it’s one feature of their game I actually like, plus its realistic. Allows a user to create a concourse fir a specific airport, or make any accommodations they wish. On top of that, i beleive it is the intuitive way to do it. I know i wasn’t the only person at least initially confused by what additional lines in the current flight planner are for. It appears the only use for it is to overlap times.

The only drawback I see in specific gate assignment is flights arriving at that timeslot on a less than daily basis which, as discussed earlier, would need a solution of some manner.

If you put the turnaround in that same schedule you would indeed get massive overlap. But my idea was to keep gates separate.

Edit: i know it is micromanagement, but runways and gates just dont have any actual relation. You can have many more planes landing / taking off than actual gate handling. Especially if you add GA and emergencies into the mix.
Having multiple runways means you should have the flexibility of having i.e. 1 landing runway and 2 for take off.

Sooo what sim airport is doing then

Well depends on what u consider the avg computer specs.

And yeah… 16gb ram, 6gb graphics and i7 along with SSD is faaaaaar away from average.

I am pretty sure my fps will start dropping hard after 10gates.

I think at the end of the day we have to remember that whatever method we choose in this instance is going to be a proxy for multiple actions and processes that would actually happen in real life, simply because that level of realism would probably become very onerous for the player once the airport starts getting busy.

I think gates are still the most intuitive and flexible compromise in this situation even though it doesn’t happen like that in real life.

But I agree with you @pderuiter in that it’s probably worth waiting for the initial release before we determine where things should go in this regard.

I’d like to say that scheduling should be based on gates rather than runways. In my experience in SA, for example, a runway can only handle 3 landings per hour, with takeoffs being a variable, and this limits how many flights I can have for a certain number of gates, depending on plane pax capacity. The flight schedule then allows to assign the flights to a specific gate, and you can set one to be a standby gate in case of delays. This keeps the flights asigned to that gate until you move it or the flight gets permanently cancelled.

How I propose the scheduling takes place here:

1.- Considering the flights are not permanent, there could be a schedule like a timetable but with tabs that allow you to navigate between days.

2.- It should be based on gates and remote stands, as I think is the most intuitive and gives you the most info.

3.- It could give you info on expected pax so you plan turnaround time or if the airline sets a fixed time depending on demand at your airport, keeping in mind you can’t have a plane for 6 hours on a gate in this game even if it happens in real life.

4.- This allows you to take into account what infrastructure and services you have available. Can you supply 5 flights with just 1 fuel truck? Are there enough check in desks? Is your security area streamlined to handle the amount of pax on a friday afternoon, with the increased demand?

While playing you can see how many flights your runway can handle, so that takes care of a part of the equation.

Let’s keep it realistic, after a plane leaves the gate they taxi to the runway and this often looks like a long queue of planes all taking off after each other, so it really does not make sense to plan runaway occupancy, this only means that if you don’t have enough runways available departing and arriving planes may take-off or land later then expected because every plane is handled on first-come first-serve base and that of course could have an influence on making your turnaround time for the incoming flight.

I do however think that gate allocation is something essential for the player, perhaps indeed with 7 tabs, 1 for each day. So not every day has the exact same flights. 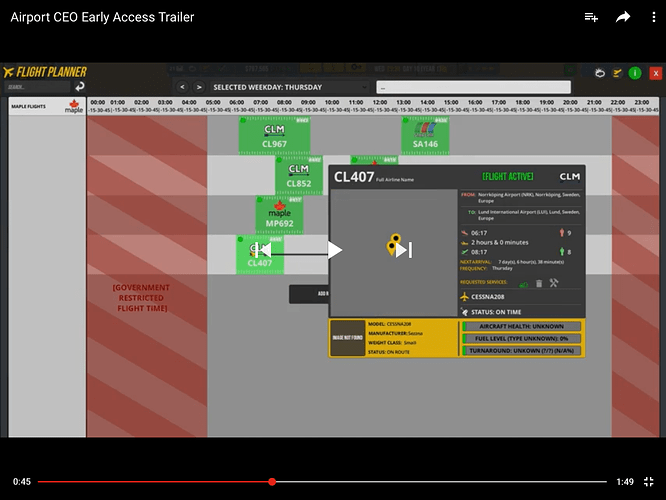 As we can see fro this screenshot of the per alpha trailer the flight planner is already a day by day planner with tabs for different days.

The increments for landing flights are 15 mins so gives a little margin for delays.

Even if picking the gate is not possible on release you could allocate gates manually by considering each row as a gate and planning flights to land when the row is free. You would not be able to pick the specific gate to land but could have some control.

Great catch! Although i beleive you can select down to the minute as was shown in gameplay vid 3, unless they changed that since then (maybe since the specific day and the restricted part of the day is new). I would still prefer also having specific gate assignment though.

Edit: The flight shown lands at 617 and departs at 817, so I think the quarter hours are just headers to easier see approximately when the flights are at a glance.

I think that people preference is clear on here but will have to reserve judgment until I play.

I wood not be surprised if through unlocks you can reduce govt. restricted flying hours and also get flights closure together.

Yea for sure, love the unlock idea. Assignment of gates is likely a more complex code so maybe something they add down the road, and the current system is probably good for now as there isn’t lounges and we have no idea how airlines and passengers react to lower service levels at certain gates yet. Still a terrific catch on the day tabs.

For now all we have is theorycrafting which is fun, but lacks proper actual game perspective.

I remember there being a flight planner but what I’ve written is more of what I’d like in a planner altogether. This one could be improved with gates allocated by you. Imagine you have a contract with an airline in which they ask for a gate to be 100% dedicated to them for several flights, as to not move personnel between gates.

Also, the way to navigate between days could be faster with tabs instead of buttons. This gives you a better visual memory when comparing different nonconsecutive days, i.e. a tuesday and a thursday.

All right, have it your way then! We’ve heard your demands and have implemented stand specific flight allocation. This is in many ways a lot more complex to deal with behind the curtains since there’s a lot of questions we need to have answers to if stuff does not go according to the player’s scheduled plan but luckily we have those answers now. We’ll talk more about this in the next devlog.