As a pilot myself it would be great to see some extended weather information for pilots, or anyone else that wants to see a detailed weather report in the form of METAR

I will use the METAR from my home airport (CYZR) as an exmple:

For those people that don’t read METARs it contains a hell of a lot of information that pilots like to know, the one above reads:

Sarnia Chris Hadfield Airport, on the 10th of the month at 0 hours zulu time the METAR is provided by an automatic weather station. The surface winds are blowing from 180 degrees at 12 knots, gusting at 18 knots. Visibility is 9 statute miles. Broken clouds at 2200ft, broken clouds at 4000ft. Temperature positive 19 degrees celcius, dewpoint positive 5 degrees celcius. Altimeter 2982 inches of mercury (QNH 1010 for those who aren’t in the Americas). Remark: sea level pressure 102 density altitude 1200ft.

Now in terms of the game what use would this have? What added gameplay would this be able to give? I don’t know if we need to see all this data or to simulate it particularly. When is the barometric pressure sensor gonna effect your airport, it doesn’t change that much?

What I do suggest is that you have the ability to install and upgrade the weather station at the airport to provide more accurate data to the pilots which in turn could make them more satisfied with your airport.

I know there is a ‘weather app’ for the CEO in the game. It feeds into a weather station you can install i believe. Perhaps that could have an option to display the METAR, perhaps in a ticker tape style

Then there should be an option to switch off METAR… I don’t understand those digits.

METAR is really cool when you understand it. However, my guess over 90% of our players will not. So it would more be a modding thing in my book. Nice idea though!

Very good idea as I have flown in a Boeing 737-800 simulator before, great idea

I would love to see METAR’s making their way into the game, how ever I do think it would be better to add it as a mod as Frederik said, what would be a cool feature for everyone are NOTAM’s, maybe in a more simple form, but I think they are fundamental for running an airport.

It might be neat info, but we are the airport CEO, not a pilot. It’s enough that we be able to install the system so airlines can use it IMO.

Thanks a lot for the explanation! My friend is training as a pilot so finally I can understand the technical jargon.

As long as weather effects the airport in ways that could shut down flights.

Make a simplified version.
Like the basic weather information everyone gets from the news.
With wind directions.

Wind directions effect which runway to take off and land from.

Airplanes take off into the wind.

A strong crosswind would shut down a runway and force you to divert all traffic to your only other runway adding a level of difficulty
Unless your pilots like these. 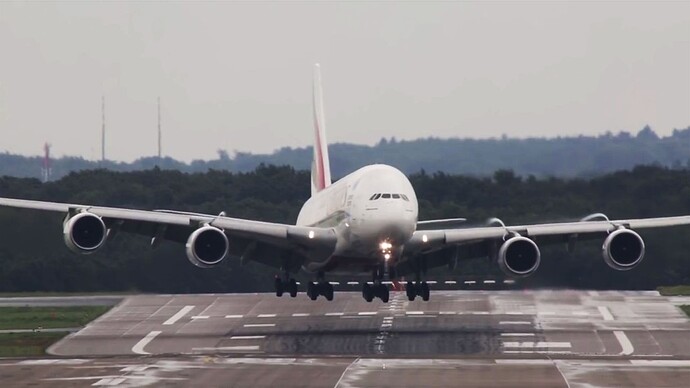 An Airbus A380 pilot fought strong crosswinds and made an incredible landing at Dusseldorf airport.

It’s just a challenge. The bigger the crosswind. The better. .