Every game and software I know have for prompt “Do you want to exit (Yes/No)” while ACEO have “Do you want to save before exiting (Yes/No)” which cause a basic reversal of the usual question, I can’t count how many time I clicked on “Yes” when trying to exit without saving because of that and I still do, maybe its just me ?
Why not having a prompt with “Do you want to quit (Yes/Save and exit/No)” rather ?

Or for me I’ve come close to clicking No and exit without saving when I needed to save. (Would hit Quit but then remember one or two last things I wanted to change before I called it a day.)

Yes I’ve found this pretty much EVERY time.

I can’t argue with that. I also get confused in sometimes.

For me, it was leading to unnecessary saving twice at first.
Now I got used to it.
Changing it now could lead to no saving at all.
@JasonM’s idea is okay for me, but I don’t see the need for changing.

I see that though the majority want an alternative, many persons want to keep the exiting one, either because they are now accustom to that or because they prefer it that way.
So what about having the option for an alternate exit prompt ?
I mean there is already an alternative dragging method for those who prefer to do it in another way, so this isn’t unrealistic, and this is actually pretty simple to implement, it literally take minutes and it can’t really be prone to cause additional bugs as the code for that is quite simple, and this is a really important QOL thing which can prevent accidental exit without save.

Yes, a setting would be nice.

Me too. And actually it would be cool if the game would recognise when I’ve saved within 1 minute before quitting and then simply doesn’t ask. That way it would still remind me if I forget to save, but it won’t bother me if I’ve just saved.
Reason is I always save before quitting because I don’t want to risk some problem saving the game and then still quitting, so I’ll always prefer to do it manually (not just in this game, even in others).

^ This, yesterday I saved and quit 5 seconds latter, the game asked me if I want to save, I thought about this too !

And yes I too love the @JasonM colors idea ! Even though I am colorblind.

I agree as well, should be a bit more clear. On the other hand, you can never save a game too many times. Even in half a minute a lot can happen that you don’t want to loose, especially now with the template tool

On this topic, if you load a game in a running game, there is no question of saving your current game first it just loads, leaving you with loosing all your work in the running game…

I too sometimes press the wrong button there, but I usually simply close the game with Alt+F4 (especially since autosave is being done at full game hours) and only use the game’s menu to exit to its main menu, e.g. for changing mods, so it isn’t really that much annoying for me.

We’ve recognized this. Thanks for the feedback, something for @Alexander to take a look at!

@Alexander
Please consider making an option for changing in game which variant we would want (I never coded any game GUI but I imagine this isn’t massively different from a simple “messagebox” plus some size, color and location things, which would literally took minutes to just put a “if”/“switch” with the actual and modified return value and text to call the “save” or “exit” function plus the “messagebox closing button” cancel button, and it would be relatively bug free because of the simplicity of the code so making it optional won’t increase the complexity and cause any issues unlike many things user would like to be optional), as vote show many peoples still want to keep (probably because they are accustom to it now) the actual way it is.

I will definitely look into this! It’s a very valid point and I’m gonna try the “Yes/Save and Exit/No”-prompt and see if it feels natural

The current layout definitely needs changing since once you clicked the ‘quit’ button, you have to close the game. It feels more logical to have a “Are you sure you want to exit?” prompt followed by a “Do you want to save before exiting?” prompt right after.

Or even better, disable the second prompt if the game has been saved in the last 20 seconds, since the user has already saved it then. (I believe Space Engineers does it this way)

In the latest version there is an updated exit save prompt

What is the general feeling? 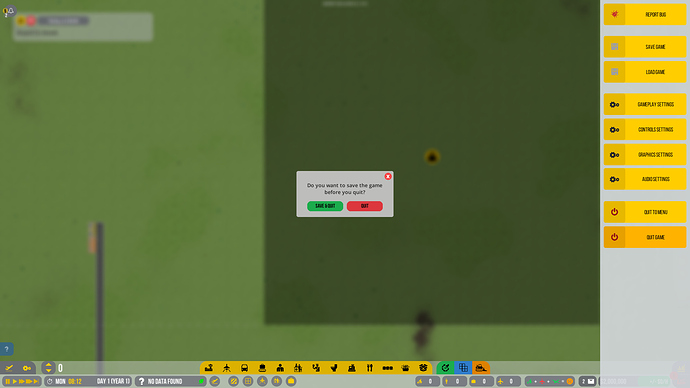