This is my 2nd airport, this time created with Sandbox.
According to game time, this took roughly 60 hours to complete.
Want to download it? Click here to download from Steam Workshop!

It took a LOT of planning, designing, and improving after inauguration, so it may be fully operational with no major collapse. Still with some fine-tuning, but I consider it complete now.

EURO Airport is a fictional airport located in Central Europe near Eindhoven.
It serves as a regional hub (with lots of citty hoppers connecting to other airports in the region), an European hub, as well as an international hub.
All stands are international to simplify the design and operations.

The airport is designed to have two separate traffic areas for both incoming and outgoing traffic, and at the same time minimize the walk-in time between airside to exit for both passengers and staff. 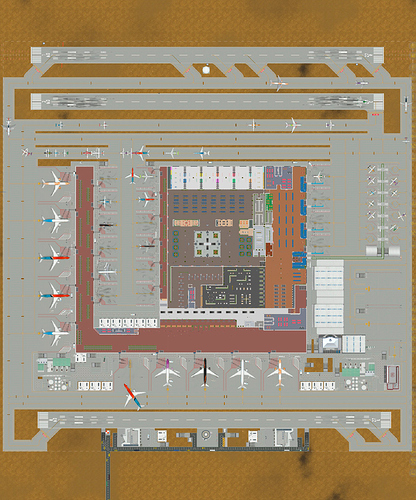 The terminal is in the center of the airport, featuring a central plaza which brings natural light to the ground and 1st floors, and connects with the underground , where all transportation is located 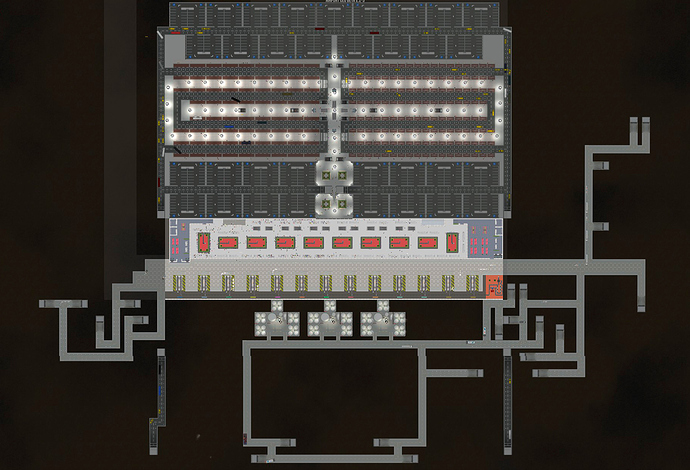 Underground zone is where taxi, bus and metro converge into the central plaza that has 4 escalators and 4 elevators that lead directly to the center of the terminal, on the ground floor.

Also, the baggage claim zone and baggage bays are in this floor
Passengers easily leave the airport after passing passport control and exit doors on ground floor, collect baggage and leave the airport choosing their favorite means of transport.

More details on the coming posts

Nice!! - will you upload this to steam? 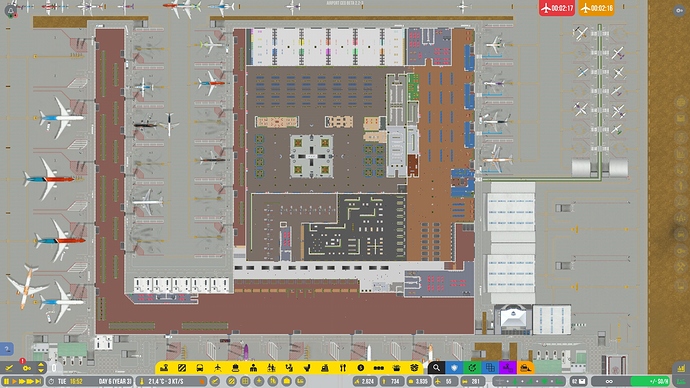 The dark-brown sections are exit sections from upper floors that converge into white area , where escalators go to -1 floor 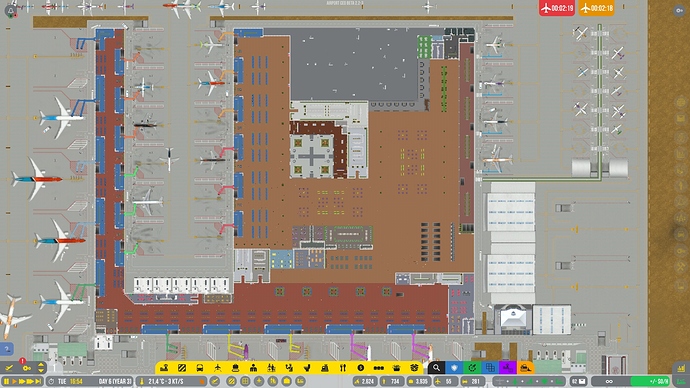 1st floor features majority of gates, large seating areas, shops and restaurants, including 2 terraced restaurants and a vip lounge around the patio.

Next posts will show some interesting details of the airport

Admin area on the 1st floor, note the individual offices for the C-Level executives 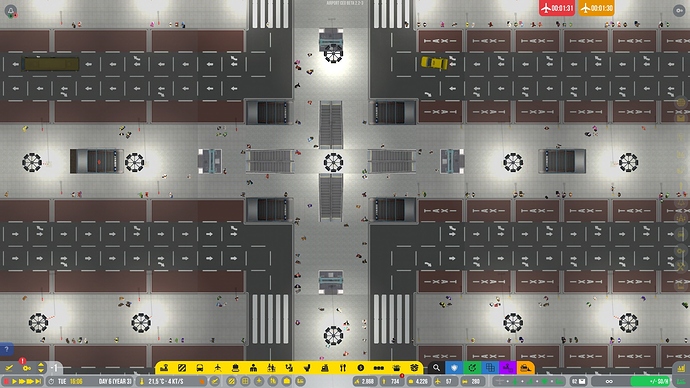 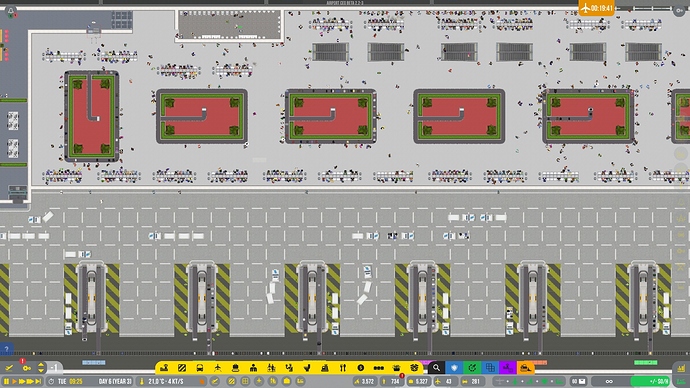 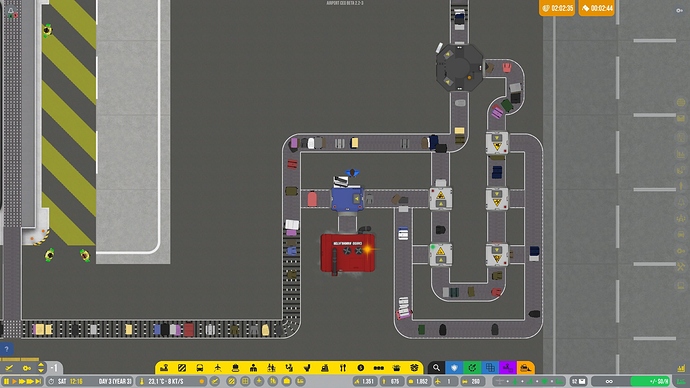 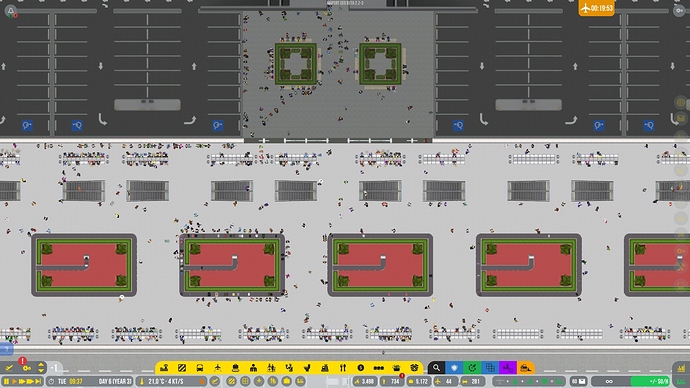 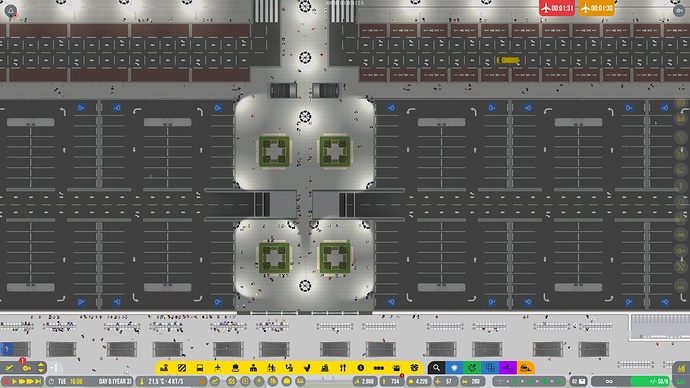 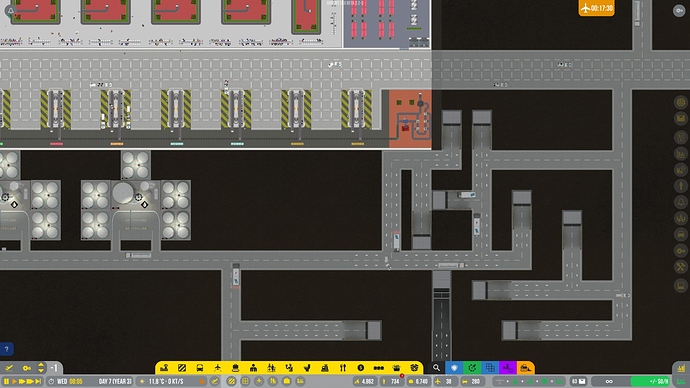 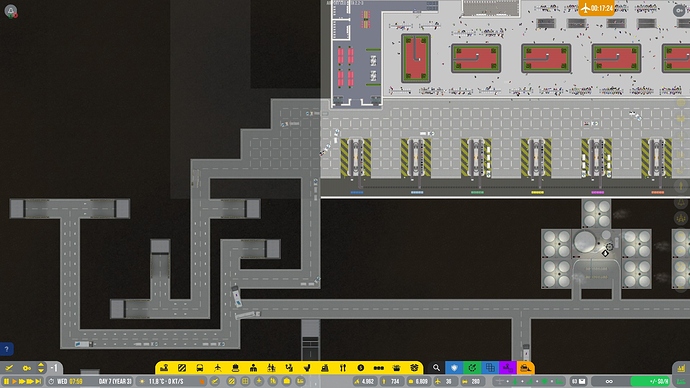 The same crossings at ground level: 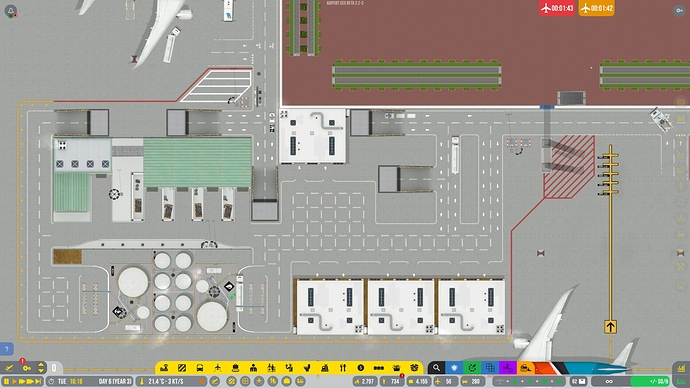 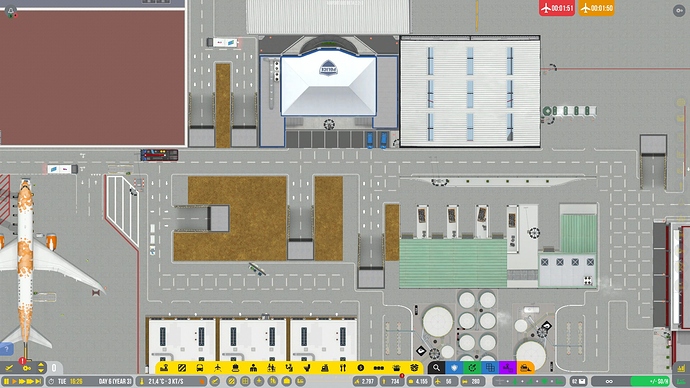 Detail of the checkin area: 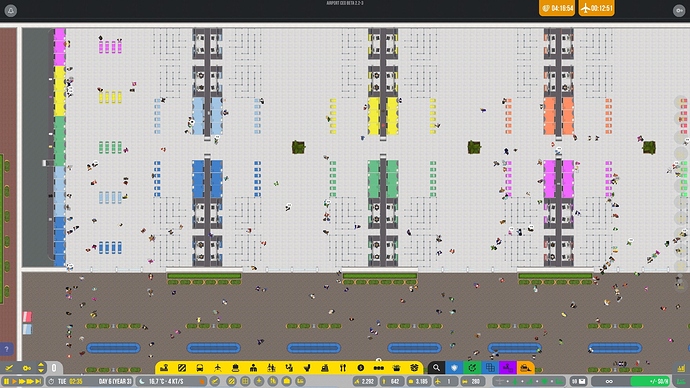 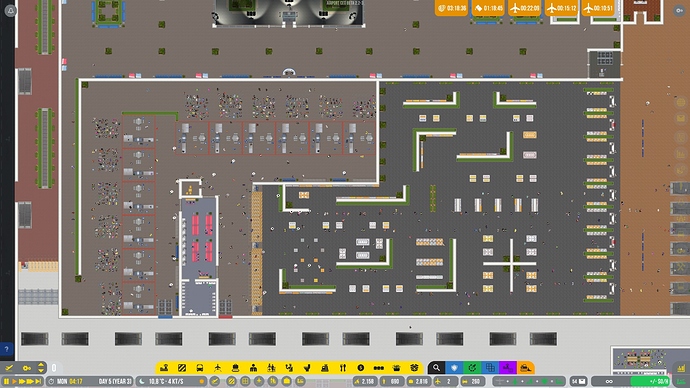 Detail of security and passport control at rush hour: 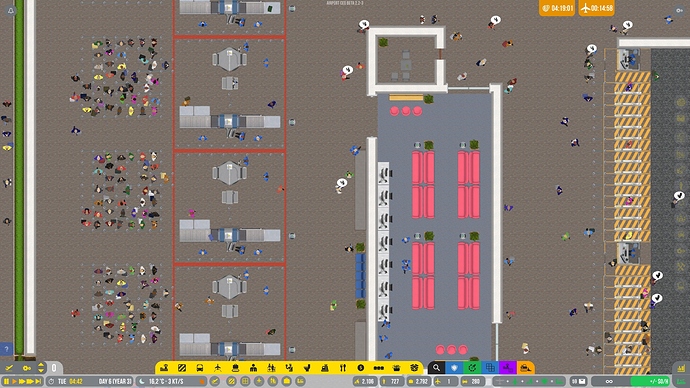 Central Plaza at the ground floor: 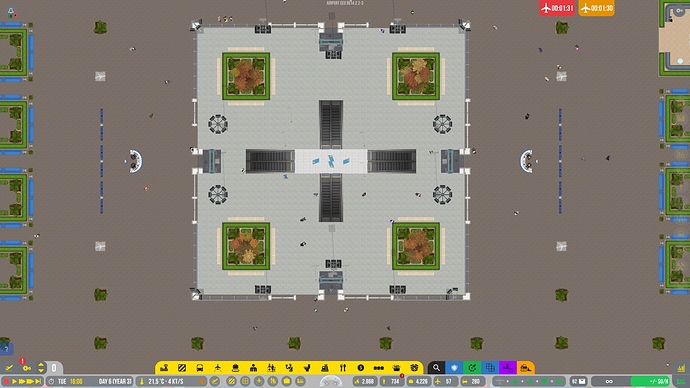 Cash deks at duty free and escalators to 1st floor: 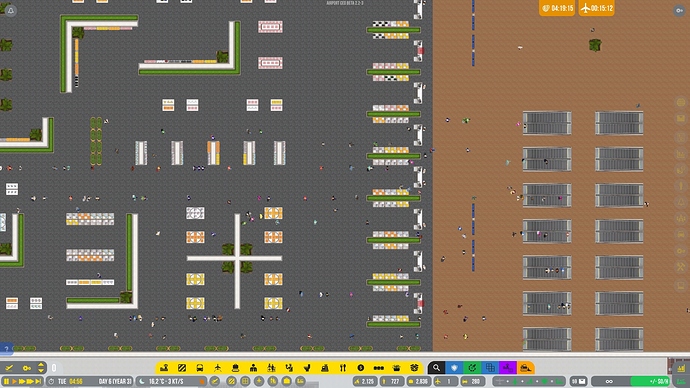 VIP Lounge in the 1st floor around central plaza patio: 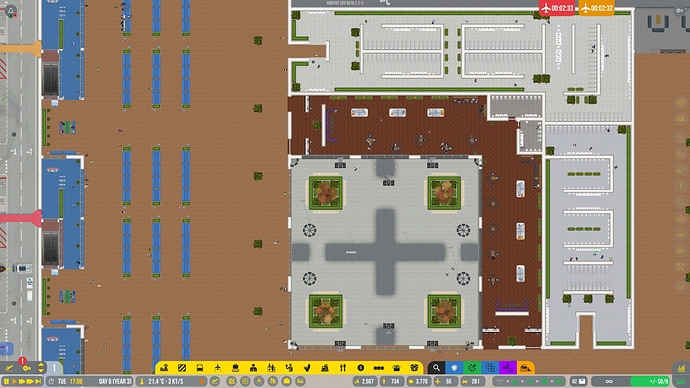 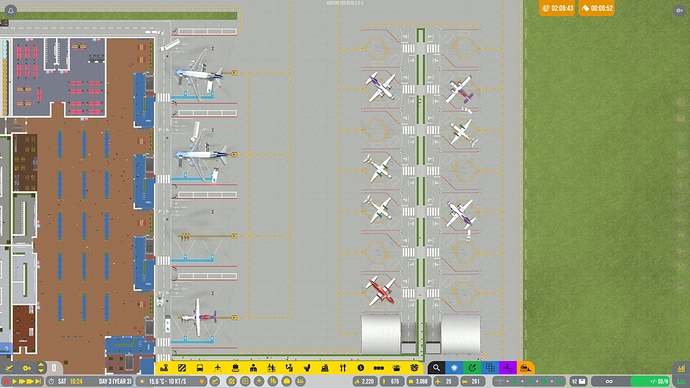 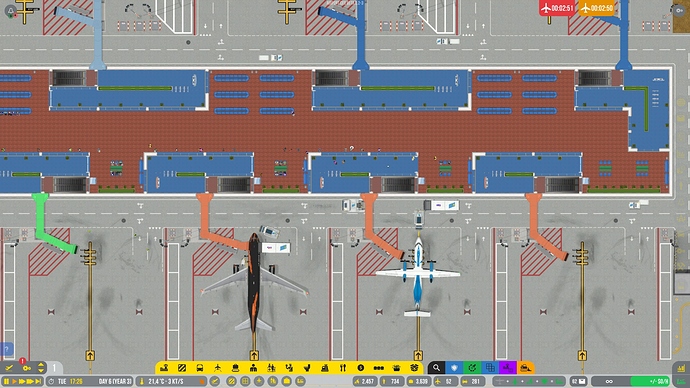 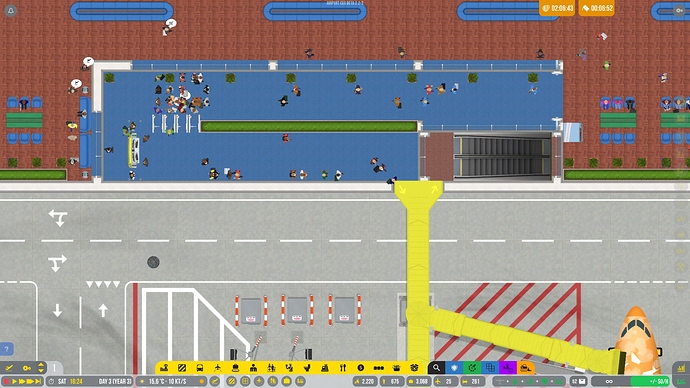 Details of franchises at the 1st floor: 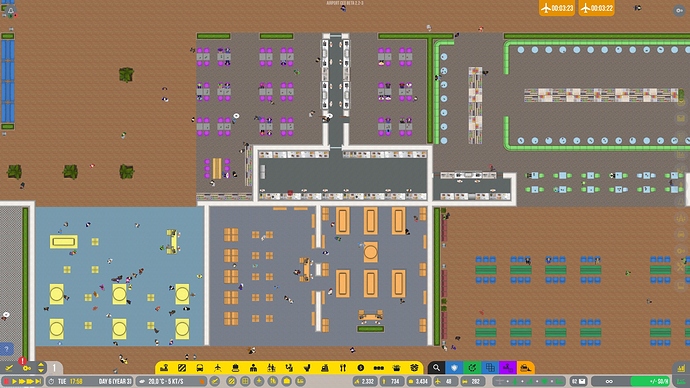 And the day is finishing with the night queue for final take offs! 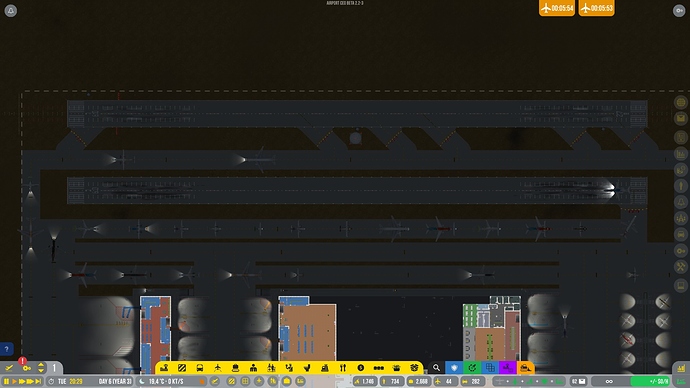 Hope you liked it!

4 Likes
Add the ability to have different locations for arrivals and departures
OKChris November 1, 2020, 9:30pm #6

Great build! I really like the colourful check in area.

Hi everyone!
I continue to work on this airport, to optimize ops, etc… a lot of small improvements, and also for the new world tunnels, so you can open it with 3.4.0 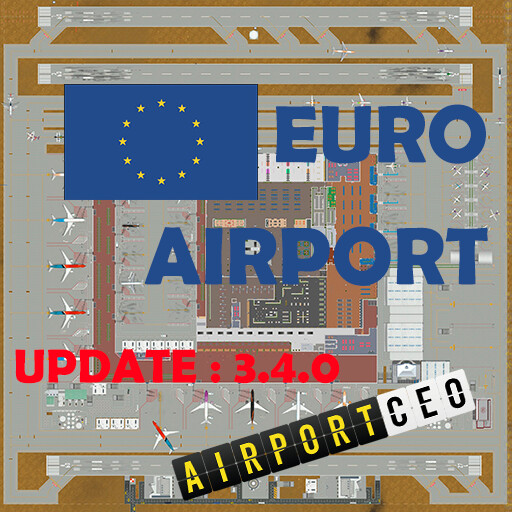 Really nice design features! Usually you cant lay down a road on the very edge of the map. How did you do that?

Oh, this is a nice idea. 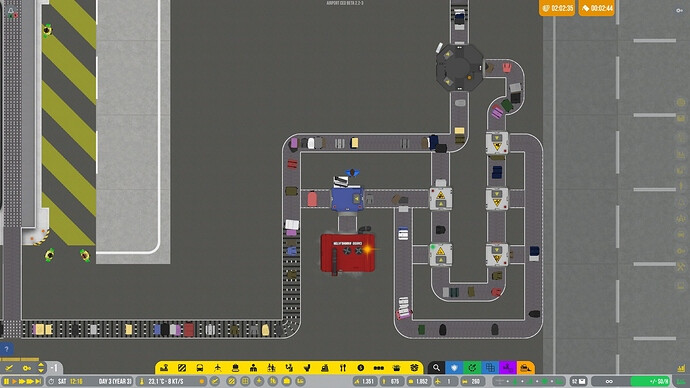 There was/is a bug where you could build a road at the first possible position and then drag it to the edge but I don’t know if it is still possible.