Keeping in mind that the system needs to be workable and relatively idiot-proof, I suggest something like this:

The baggage bay is split into inbound and outbound baggage. An array of four bays is depicted in the image below. Each bay is the ‘owner’ of four carts, and each cart can hold 20 bags. A flight is allocated to a certain baggage bay (or multiple ones is required), and the bay will collect and store the bags in the carts. Once the aircraft can be loaded, a truck will drive to the bays, pickup the carts and bring them to the aircraft. Once the aircraft is loaded the carts are returned to their bay and the baggage bay can handle a new flight. To cut costs or provide variety, the player could also opt to equip a bay with less carts.

For inbound baggage the carts are permanently stored on the aircraft stand and driven to an unloading bay once the aircraft has been unloaded.

The current baggage system feels simplistic and too powerful. All you need to service a flight is a bay, a few trucks and some belts. The baggage bay seem to be able to handle an unlimited amount of baggage in their storage holds, baggage carts spawn out of thin air and a ‘complex’ baggage system consists of the same thing copied and pasted a bunch of times. 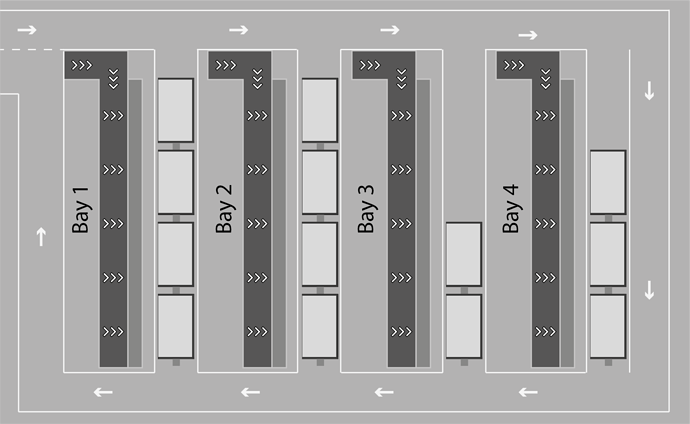 I have 3 words to describe how much I want this… Give Me NOW!!!

Great idea! it will definitely prevent me from hiding the baggage bay underground! Will give use to first floors of advanced large terminals, and make baggage bays more streamlined.

I’m confused about the way tractors and carts will be purchased though.

This is a great idea. I hope they implement this. It would also massively help decongest baggage bays so they can accomodate more than one truck at a time.

We also need the ability to create multiple baggage carousels in the Collection area, with flight(s) allocated to each carousel. This will provide the impetus for the Airport CEO to develop the baggage collection area dynamically as their airport increases in size, similar to providing additional check-in desks and bag drops as the number of flights handled increases.

It already exists, there’s just no limit on the size of the carousel or the amount.

Just do a carousel per room. You can do as many rooms as you need to. I usually do something like 8x20 tile rooms, 4-5 of them against 10-12 stands.

And yes, i support this idea for baggage bays.