Fictional airport serving catchment area Southeast of Dallas, Texas, USA. This was created primarily in sandbox however the costs were often applied in standard gameplay and developed over time. 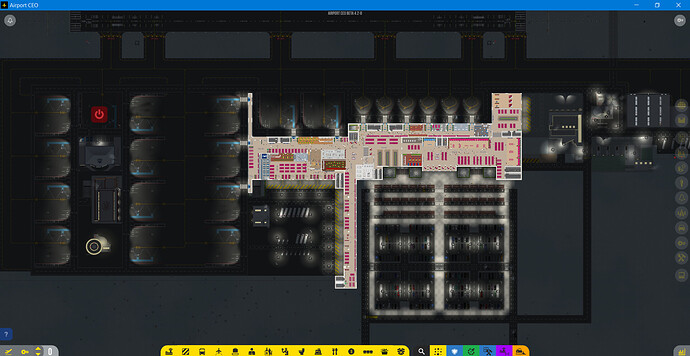 The check-in process is fully automated using auto bag drops. The area to the right was recently completed to allow international flights. 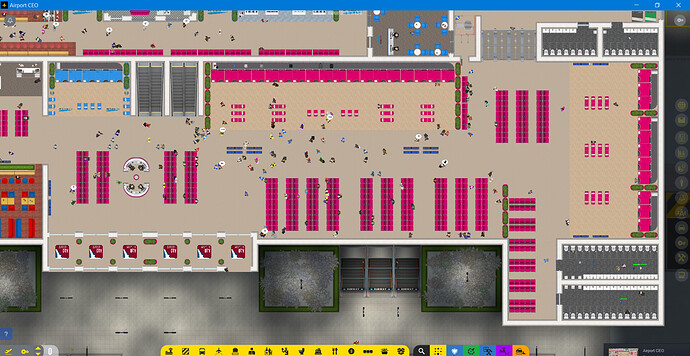 The escalators from Check-In lead to the security area above which also includes a staff room. There are 14 passenger search areas (staff use the area located in arrivals). 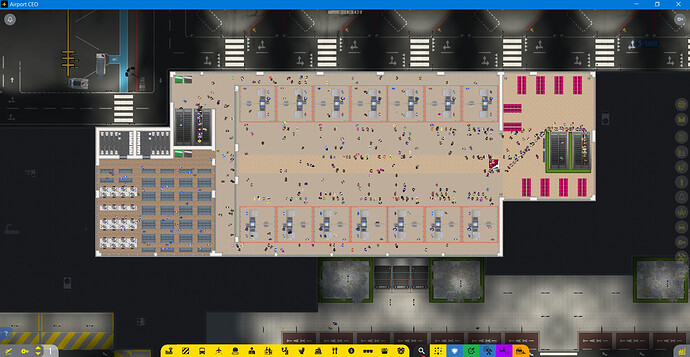 As part of the Phase 1 project to launch international flights, a temporary area was segregated with it’s own services and facilities including a shop and restaurant. International flights are currently bussed, with the arrivals dropped off at the east of the terminal. 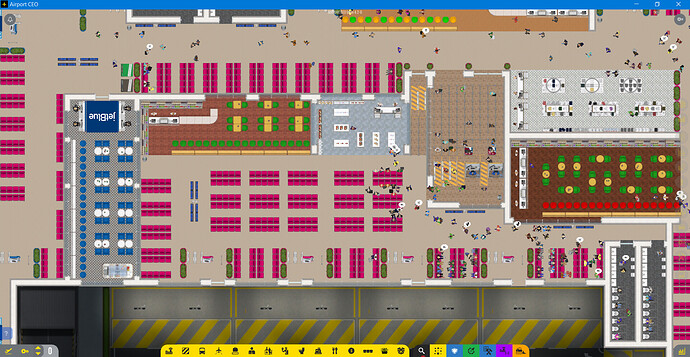 The new dedicated International Arrivals area is home to immigration desks including automated gates and a baggage reclaim area, toilets and vending machines before exiting back into the public area. 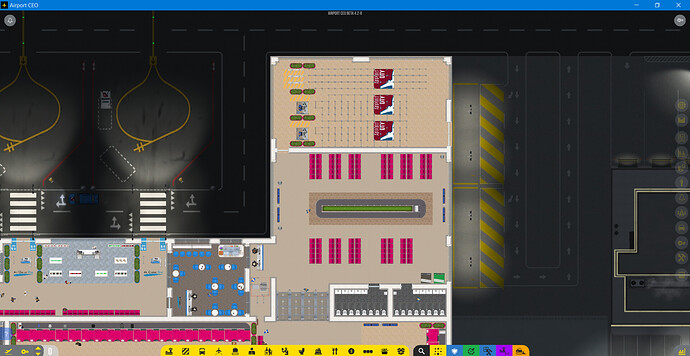 With the Southwest pier under construction, the northern development was completed as Phase 2 expansion (the concrete areas). Maintenance facilities include 4 hangars and two dedicated overflow stands for medium aircraft. The new landmark large tower has also been completed increasing capacity of the airport significantly. General Aviation despite the airports size, is still possible making full use of the new 3rd runway handling small aircraft. The two medium stands to the east are International, using the underground service road for access. A bypass taxiway was also constructed to allow aircraft quicker access to the centre runway including from the de-icing area. 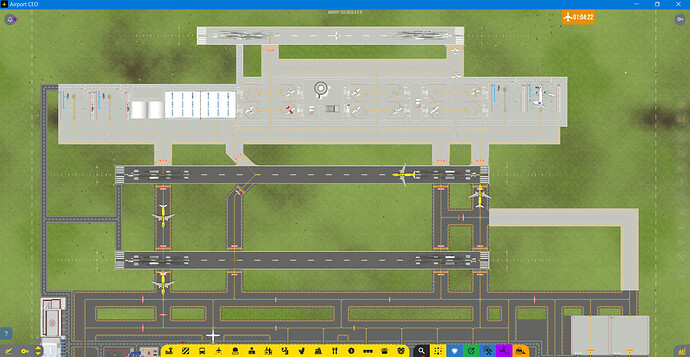 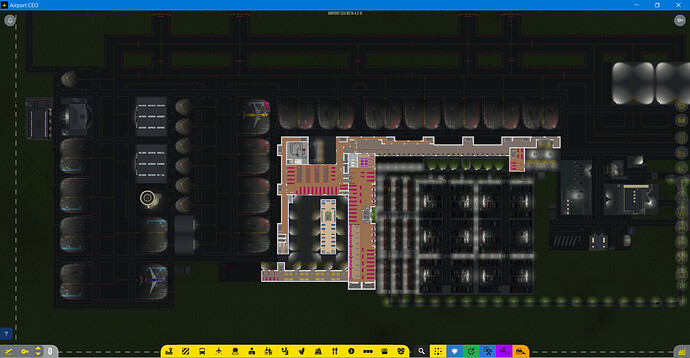 The completion of Phase 3 expansion and improvements brings the opening of a satellite pier accessed via an underpass with moving walkways. The satellite is dedicated to Southwest, with the remote stands dedicated to Spirit with a branded shuttle bus gate area (south section of terminal). 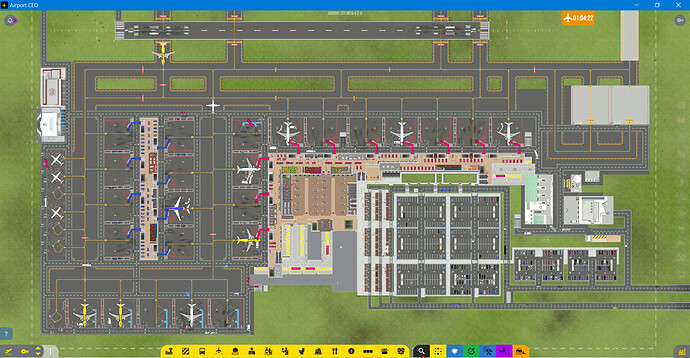 The car park and transit areas have been significantly expanded to ensure sufficient access without causing congestion. Upon entering the terminal there are 6 bag drop areas, paired up to 3 different baggage sortation bays underground. To the north of the check-in hall is the arrivals exit and a small shop and coffee shop. The escalators lead up to security. 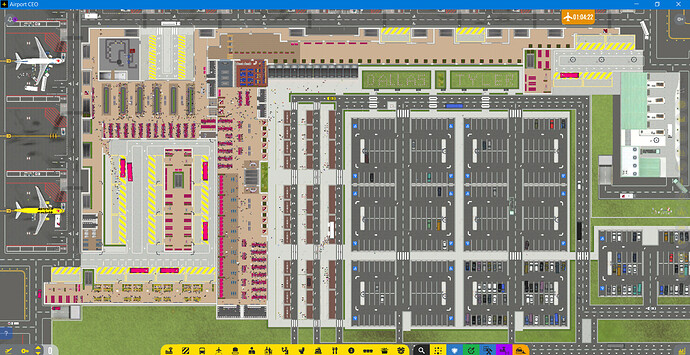 The security area has been reconfigured to maximise the use of space, also allowing for further expansion to the south as required. There are currently 20 security search channels for passengers and 2 for staff. Once through security there is a choice of food outlets and shops. International departures are to the east of the terminal via the immigration desks which include automatic immigration gates to minimise queues. 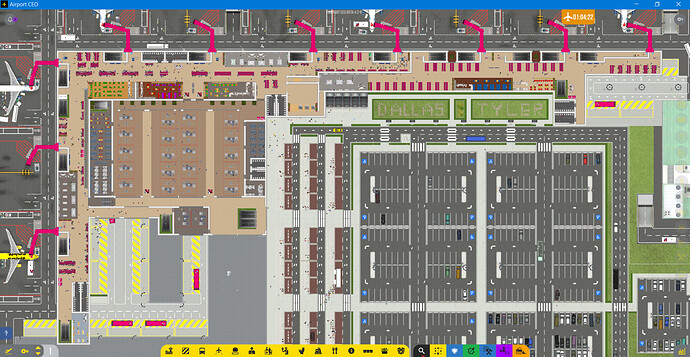 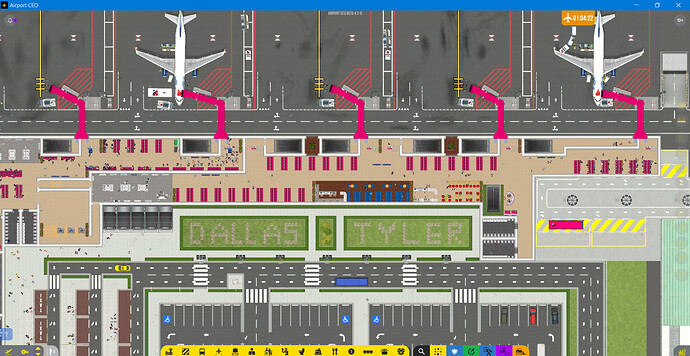 The ground floor of the International pier houses the immigration checkpoint with space for future expansion to allow large aircraft to operate at DTY. Further toilets and a staff room are also planned in this area. 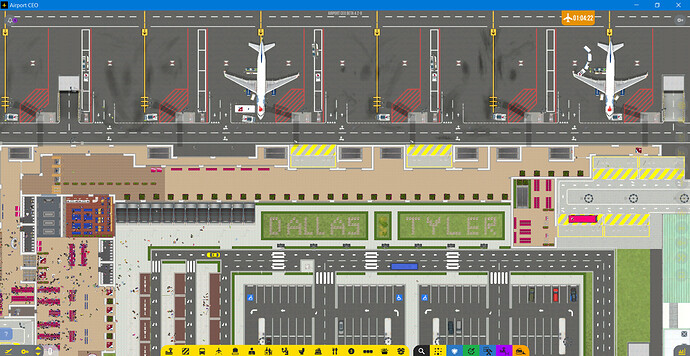 Returning to the Domestic departures area, there are two remote boarding gate areas. The central area serves the small stands due to the limited seating and space. The south area is used by Spirit primarily, with some of the gates used for overflow/emergencies. Arrivals are fully segregated to dedicated bus bays linking directly to baggage reclaim minimising the walking distance. 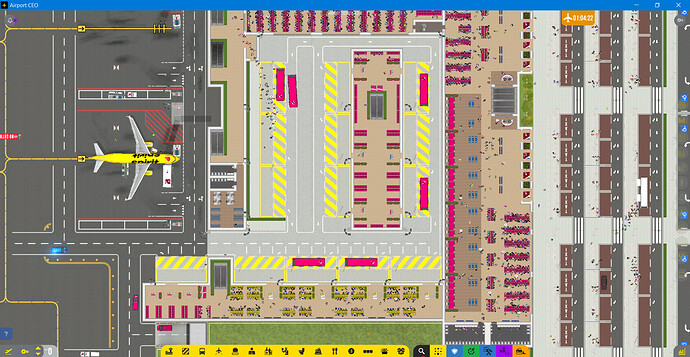 Underground we find baggage sortation bays and vehicle storage. Completed during phase three is the satellite pier dedicated to Southwest. The pier is linked via a underground walkway shown. 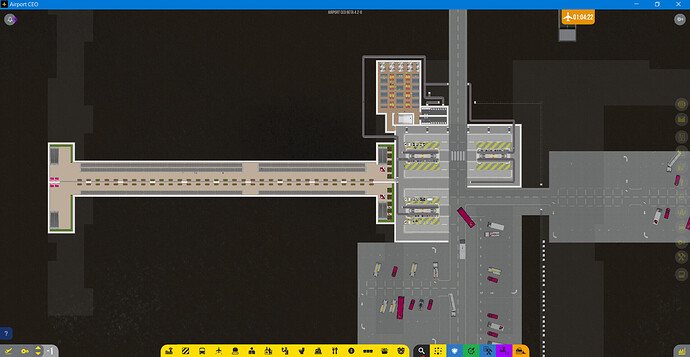 The satellite pier features 8 Southwest stands all connected by branded airbridges, there is also retail and food outlets found here plus plentiful seating. and toilets. 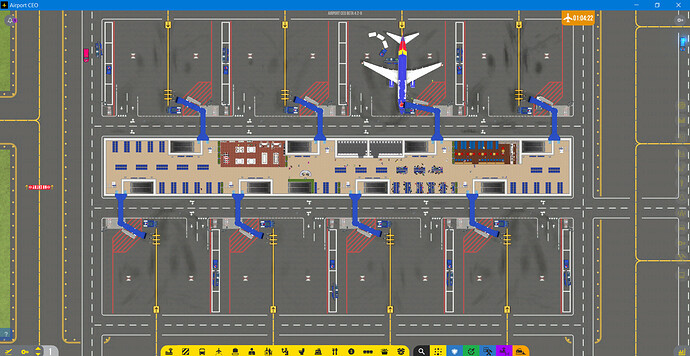 The arrivals area was also reconfigured as part of Phase 3, increasing the number of reclaim areas from 4 to 6 with the opening of the Southwest pier. Baggage reclaim remains an area of focus as the current hall at peak times can become over crowded. One of the plans being considered is to segregate international arrives to a new baggage reclaim area, where the shop and coffee shop are currently shown. 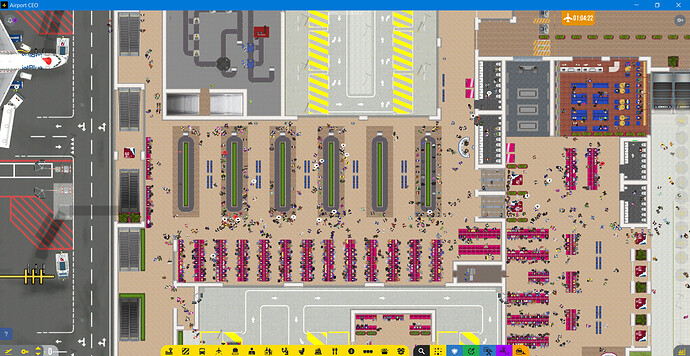 Thanks for reading, any feedback welcome