I noticed what appears to be a glitch / bug / error.

Basically, my baggage system all works as intended, but right before the bags are about to be sent for loading onto a plane, they disappear from the bay. For now this is only happening with outgoing baggage. All incoming baggage is properly unloaded and sent to baggage claim, where passengers pick it up just fine.

Has anyone else noticed this issue? Is this intentional to solve any possible loading errors? Merely confusing me right now because I’ve never noticed it happen before. Again, no routing problems or anything. The system is working as intended, the baggage at the bay for loading onto a plane simply vanishes.

The end result: each plane this happens to still displays "baggage loading completed’ and instead shows a “0” for bags loaded. It stays green. Kind of funny.

Edit - One addition to note: I’ve now noticed some baggage being loaded onto aircraft, but it still doesn’t count towards the number of loaded bags. Oddly, my ramp agents took some baggage for a flight but left others sitting there in the bay. Either way it didn’t matter because it vanished eventually. Now my airport’s reputation is tanking because my “loaded baggage onto aircraft” rating is red in the single digits.

Do you have enough baggage trucks? Me, I got a similar thing and the reason were too less baggage trucks. The game reacts very player-friendly and let the plane depart without the baggage.

A similar effect can also be spotted with baggage on the baggage claim, if the PAX is e.g. too long in a queue of a café or shop.

Yep, plenty of trucks. This was happening when there was only one flight at the airport, as well. Your second point makes me wonder, though. Perhaps the timer that’s set to make bags disappear after so long is set to too short an interval? Is there any way to manually adjust that timer? My bags do have to travel a long way before they get to the bay.

As I said, no issues at baggage claim. Thus far, waiting for loading at the bay is the only place I’ve noticed luggage vanishing.

Okay, so I’ve decided I’d add a bit more context to the problem after some experimentation. This might help others in the future, but I’d like to ask: if anyone has used long conveyor belts before, have you noticed the same issue? Does bag travel time count towards its “disappearance” timer?

First, here’s a picture of my original setup: 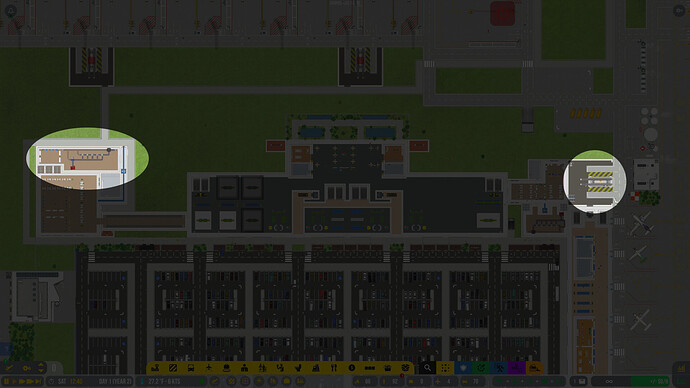 I’ve highlighted the security scanning room on the left and where the bay is on the right. The check-in desks are on the second level centered in-between the two highlighted areas.

Next, the route my baggage took originally: 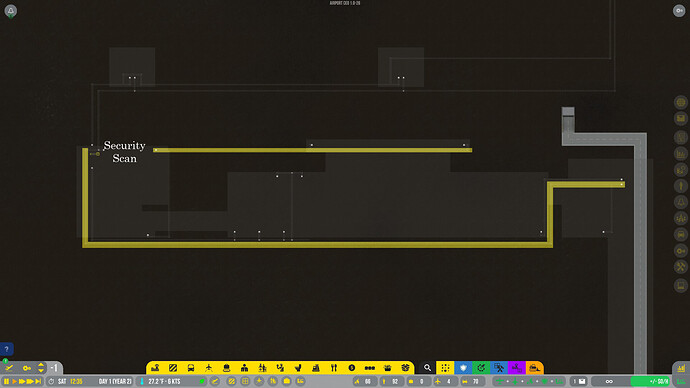 The original belt is highlighted in yellow. As you can see, the bags had to go to the left toward the security room and then around and back to the right.

To see if it would fix the problem, I added a new security room immediately next to the baggage bay on the right / east side (you can see it on the first picture, in the dark, but adjacent to the bay). This cut down my baggage travel time to this bay by basically 90%.

The question is, did it fix the problem? Well, kind of, but not entirely. I was finally able to see some baggage get loaded onto aircraft and count. Before long my rating jumped from 0% to 50% in this category. Unfortunately, each flight - for whatever reason - maxed out at “2” loaded bags, even though I saw some flights take on more than two bags.

I also still had some bags disappearing. For example, I had one flight where there was only one checked bag to be loaded, and it disappeared at the bay again. Even with my shortened conveyor belt and so forth. What I can’t control is how long the bags sit in the bay because I have no control over check-in times.

My flights haven’t been slow or delayed, either. They all run on time. So my initial theory of the bag travel time counting towards the timer that determines when bags disappear hasn’t necessarily been proven. If my bags are still disappearing to some degree, what else can I do? I have to think it’s a bug or unintended consequence.

For now I’ll abandon this airport and start a new one, instead, unless anyone else has some insights. Again, this isn’t something I’ve seen happen before and I’ve been playing this game since the alpha stages.

: if anyone has used long conveyor belts before, have you noticed the same issue? Does bag travel time count towards its “disappearance” timer?

This could happen when the bag arrives after the baggage truck already left to the plane.
A) For this distance, High-Speed belts might be the solution
B) Do you have not enough check in desks or do flights have to wait until another check in is finished? This can be a reason why bags are dropped to late and arrive at the baggage bay too late.

A) For this distance, High-Speed belts might be the solution
B) Do you have not enough check in desks or do flights have to wait until another check in is finished? This can be a reason why bags are dropped to late and arrive at the baggage bay too late.

(A) I use high-speed belts almost exclusively. Unless there’s some way to make them even faster, not much more I can do there.

(B) Plenty of check-in desks. I have one auto plus six manned for seven (7) small stands. As I mentioned before, I was having problems even with a single flight arriving and departing. I’ve expanded a bit since then, but nothing that my airport can’t handle. With the shortened conveyor route, the bags sit in the bay for a while now until the flight finally lands and loading can begin.

Even with the longer route originally, my bags made it to the bay in plenty of time before the plane landed and loading had to begin. To your first point, there was a time I saw a baggage truck take some bags for a flight off the bay, but ignored and left other bags for the same flight. I didn’t understand that one, at all, but in that instance, it made sense to me why the bags left at the bay ended up disappearing.

I think that was a one-off, though. I haven’t seen that problem repeated.

Well, I started a new airport and baggage still disappears at times. I’ve noticed my ramp agents holding the luggage and it disappears from their hands, right after they’ve successfully loaded other baggage.

Not sure why this happens. Would being on the “experimental branch” matter anymore? Is that even a thing now that the game is fully released? I guess it is what it is.

Baggage are removed when passengers leave the airport or when a flight leaves the stand, if you can anticipate what bag is about to be removed you could click it, pause and jump to the passenger to see what’s up. Perhaps they belong to passengers who are revoked from the flight and leaving the airport?