Description:
I thought that we should have an option, like the runways, to set stands to departure, arrival, or both.

Why it should be implemented:
This could really help with better airport planning and traffic. Especially with multiple terminals. One terminal could be arrival and one could be departure. this means that there a flight assigned to that stand say can only can board or leave the plane.

The downside of this is that planes often do turnarounds, so they’ll go back out.

I have never seen such a stand type in real life. Do you have any example?

One example is at ORD in Chicago. Terminal 1 has Lufthansa and ANA departures, but those airlines have arrivals at Terminal 5 because only Terminal 5 has customs/immigration facilities. They then have to move the planes back to Terminal 1 to board 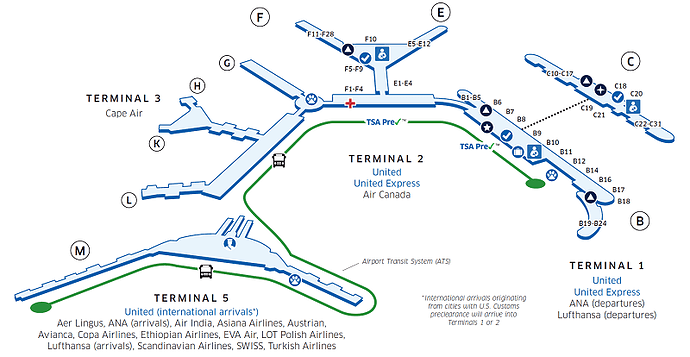 To be fair I’m not sure the stands are solely reserved for these airlines all the time. I imagine United uses the same Terminal 1 gates for domestic arrivals/departures when there is no ANA/Lufthansa plane there and that, similarly the arrival gates in Terminal 5 are also used for other airlines that need departure/arrival gates at other points of the day. But it’s the closest example I could find.

Interesting, it seems to me like an odd solution to a problem. Surely renovating a terminal is more cost effective on the long term than to continuously tow aircraft to a different terminal. Then again, on larger airlines using a hub-spoke model, turnaround times might allow for this since the aircraft have to wait anyway.

Despite it being a thing that is apparently used, I wouldn’t want to see it any time soon in Airport CEO. There are more important and more significant things to implement at this point.

I think this procedure is only sometimes used on longhaul flights, but definitely not on short and medium haul flights. After longhaul flights an A/C may arrive at Gate X and after deboarding/unloading it is towed to a remote position, due to a very long ground time at the airport. Then, some time before departure the A/C is towed back to a Gate, which might be different from the arrival Gate.
The turnaround time on short/medium-haul flights is too short to get the aircraft from one gate to another.