Right… I have a busy airport and flights are not landing as they are delayed. Fine, this happens in real world. But I can’t cancel them or even move them to another stand. The result is later flights cant land before them, so I have to cancel them (too close to arrival to move stand) and that lowers that airline rating due to another airlines mess up.

As a ceo I shouldn’t have to deal with this, but if I do, I should be able to cancel the delayed flight and probably claim compensation from that airline to pass on to other affected airlines to stop my rating going down.

Its annoying and to me appears to be a bug. Which I have reported it as. See my attached pic - the 1st 2 flights are delayed and its not my fault they are delayed. 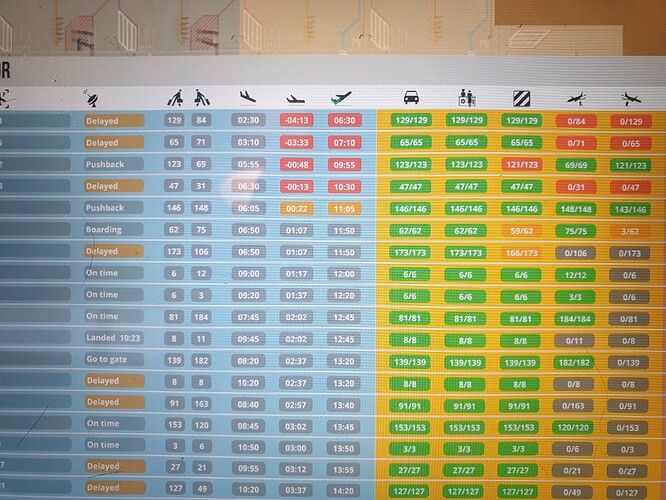 Quick question about delayed flights. Why can’t the delayed planes that are arriving just land and hold somewhere at the aiport, on a taxiway or something.
Sometimes a flight is delyed like 3 hours and then he just circle around in the sky?

OK, fixed my problem by shutting runways and reopening them. Got about 12 aircraft landing at same time! Must have been some sort of deadlock in the sky…

lol, I feel like we should have the ability to, if the flight is delayed and in the sky, to be able to move the flight without having to move it back by like 3 hours, that would make overflow gates way more useful, instead of being un-used in the corner unless there is an emergency flight