De-icing in stands, during turnarounds

An option to help de-ice the pads, the de-ice operation can be done at the stands during turnarounds…
When using only de-ice pads, it ends up forming a choke in the taxiways to the runway… 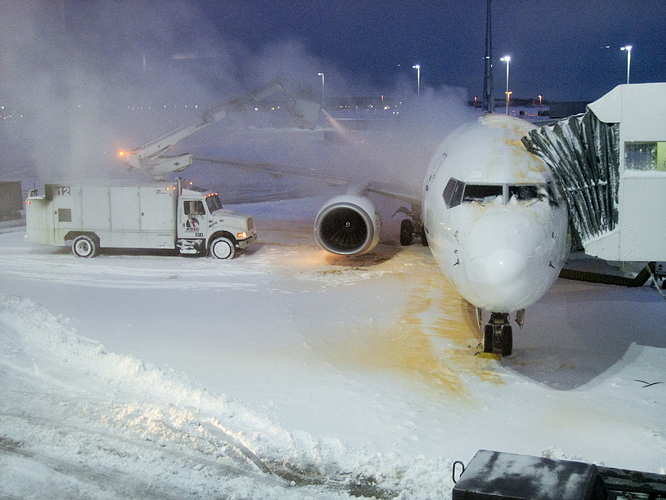 Look a aircraft de-icing at gate…

It would add realism to the game. I definitely agree, that’s a small thing but it would help. I found de-icing more common ossuring during turnaround than on a special pad.

Most airports don’t allow this as it requires special drainage at the gate to handle the glycol. Most airports have designated areas for de-icing for this reason.

Think in depends on the climate/geographical location of the airport. In the UK all de-icing is done at the gate as there simply aren’t enough icy days in the year to justify buying/maintaining a lot of de-icing equipment. I’ve been sat on a plane on the stand and told we’re 5th in the queue for de-icing cause there was 1 truck handling the entire airport.

In Scandinavia, however, there are separate de-icing pads as per the game because there are prolonged cold spells where de-icing will be needed for days/weeks on end, so it makes sense for the airports to invest more in de-icing equipment.

We have a similar issue in the UK with snow, because it’s sufficiently rare that companies don’t feel the need to invest in snow ploughs etc., so 1 large snow dump will bring the country to a grinding halt, but that’s a different story…

Did they consider de-snowing the tarmac?? I don’t think the ice on the wings is the most pressing concern for this airport…

I was just about to post this very topic actually. There’s a huge difference in infrastructure for de-icing operations depending on geography.

Mobile Services - where the snow can be intense, but it’s not persistent, there are no de-icing pads, only trucks. They do have a small place where they’ll sometimes push the planes back to in order to open up their gate for another plane, but there’s no de-icing infrastructure. It looks like the pic above

Di-Icing Pads - Like the game has, places where planes go to be serviced - bring the masses to us mentality. Less risk for aircraft damage from moving vehicles, no need for trucks to be filled up, underground infrastructure that supports the de-icing materials.

Hybrid Models - Combination of the two. I would think this is how airports with the De-Icing pads actually operate anyway. When the plane is too large for trucks to do safely and efficiently in a timely fashion, a pad situation is going to be most efficient (but shouldn’t require trucks to work) yet the small and medium aircraft can usually be serviced by the trucks…

It be nice to have the flexibility where trucks will do it on their own without a required pad, but certain plane/weather conditions won’t allow trucks, they planes will find a de-icing stand.

Otherwise, I love what you guys are doing in this game. So much fun!

As someone who has worked at an airport, I’ll put my perspective in. Pads are a fair bit more organized and useful. I understand the WANT for de-icing at the gate, but a fair bit of airports are steering away from this for multiple reasons.

I know here at HSV, because of our design, we push out the gate (about 2 plane lengths out) and deice on the apron there. It gives the trucks more room to move, and if the gate is needed, it gets to be utilized even though that aircraft is still on the ground.

Bru also announced to work on a platform since they had a spil of used deicing fluid into the rain drainage system and polluted the local waters in 2017.
https://environment.brusselsairport.be/en/the-treatment-of-de-icing-water-at-brussels-airport

Let’s say you can start de-iceing services at the gate with a negative impact on the airport rating. And when you build de-iceing pads, it’s a benefit for the rating.

Bit late on this one bit just seen it.

The reason for pads over at gate service in cold weather is due to the Dryden accident and the following La Guardia accidents with ice build up/cool sink on the wings with type 1 de-icing.

I think removing the pads and having at gate service whilst it would be good for gameplay would actually be a realism downgrade,

And type 1 only suitable for temperate at gate.

I’m well aware it’s a game first and not a simulation so all of the above isn’t suitable but you can see I would prefer to fix the issue by introducing features that make it useful rather than changing it to an at gate service. And also having airport location make significant difference to services offered

Let us all remember however that the de-icing in many airports is done at the gate, many large airports with substantial winter seasons. UK airports primarily do so at the gate.

Different airports, different policies. Generally airports with stand/gate de-icing will strictly control how they ensure that aircraft will depart within X minutes. Pads near runway are absolutely more efficient for that reason, but depends usually on the climate locally but also if an airport believes they can or can not get a de-iced aircraft to the runway and cleared for take off fast enough

LHR London Heathrow, tends to take the spray at the gate then dash to the runway idea, but at considerable risk to delays and risking an aircraft needing repeated.

Of course as interestingly and rightly noted above, Dryden is a tragic example of when the spray at gate policy can fail.

Also in terms of pollution. The fluid naturally runs off the aircraft during take off and taxi hence the time limit for effectiveness. Airports strictly control all drainage for this and similar reasons. At gate, leading edges being sprayed actually doesn’t cause all that much run off, but clearing layers of snow or thicker ice will do.

Maybe an option of either method? With economics being the decider as stand spraying is less efficient, but a pad is more costly, but if you are in a cold climate the pads are more cost effective?

I would say that Heathrow is more of an exception than the rule for this. And even then they have 2 pads (Jedi &Vader) which are located by the runway

Frankfurt has policies for both at gate and pad de icing however the conditions to allow at gate mean it’s only likely to be used early/late in the season and predominantly will be at a pad.

Chicago is At Pad, Atlanta is at Pads (have over 20 I believe) LaGuardia is on pads as well.

Paris CDG is done on pads (20) Orly though is done at the parking stand.

A lot of US airports use pads and also have a recycle/recapture policy on them as well to save on costs.

Valid points and I do agree, but still feel the bigger picture is that both are common in their own way. Usually depends on how often snow fall affects the airport, or if it is more about minor de-icing to leading edges rather than need for clearing layers of snow.

To my knowledge, with airfield ops colleagues, in UK the rare pads including those at LHR are only used during extreme winter weather. They are not used for standard British winter mornings with a frost or minor icing, so stand spraying is done.

Many airlines in Europe have emphasis on ground staff making sure passengers are aware of fluid on the stand, ironically incase they slip

Good point that. Drainage upgrade with a cost

Great points, on top of that though. Here in NYC our airports are all on the water, whether they border the waterway or are built out over the water. The fluid is never allowed to enter those waterways so the De-Ice Pads are always a good distance away and well drained.

What if u could get like snow plow trucks, or salt truck for the airport.