I’m running an Airport with 16 Medium Stands that are fed by 10 Medium Security Gates. However I’m still noticing the boarding is very slow (I’m running 2 medium boarding desks per stand). 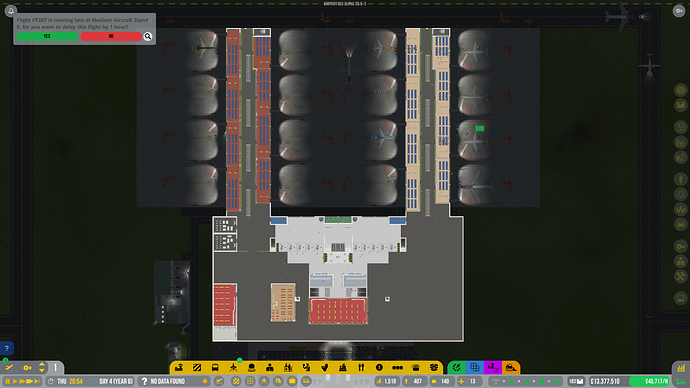 I’m running 16 medium stands and 4 large stands with 16 large security stations. This works most of the time, sometimes it gets overcrowded. Try upgrading to large stations. Also, try doing the math, if you’re noticing that medium stations only pass 1 person per 1-2 min, then it takes them over a hour for planes 120+ passengers.

The big problem is planes get held back because 1 or 2 passengers are stuck in security during boarding. I’ve no idea why its always 1 or 2. The boarding is painfully slow even with 2 medium boarding desks.

On 75% there is no issues, it feels like the game just isn’t designed to run 100%. Even the baggage is slowed down because a max of 8 ramp agents can’t support 100% luggage.

The baggage can be fixed by placing more bays. I know many people put one baggage bay per three or four stands, @awtkn can probably help.

Thats true, but the game items such as baggage bay, stands, check-in desks, boarding desks and security should’n’t be affected by the passenger 100%. They should scale with it.

As an example I know when I get to large stands I’m going to end up with 4000+ passengers (currently on peaks of 3000 and in order to continue playing I’m going to have to drop it down to maybe 75%. By then all the changes to deal with 100% will be pointless.

I noticed you are on speed 3 @Zedrophobe

Slow it down to speed 1 and this should allow your computer to process everything more efficiently. The larger your airport gets the more you need to keep your speed at 1 otherwise this will cause processing delays. Once I started using speed 1 on my airports with lots of gates everything seemed to be on time and more efficient

I have had an airport run very efficiently with 22 gates and 12-14 medium security checkpoints (4 gates were CRJs/E170 & 190s and the rest of the gates were B738/A320/A321/B757s) and much longer walk to gates for pax. But once I put it on speed 3 the computer has to try to keep up with how many pathfinding it has to compute and can’t keep up with the speed and then it causes delays just like you are describing. a few pax get stuck in the lines and take longer to figure out where to walk next etc…

spread out your schedule, if you have lots of flights coming in all at once your security will get bombarded with pax, if you spread out your flights this will allow for more spread out flow through security. etc.

so take note one what aircraft are in the contract and showing up. Pax #'s can differ by a lot per aircraft. can be 200+ for B757 and as low as 30 for CRJs/BaEs etc… so this requires completely different airport design and item requirements depending on what you are getting.

but again, Speed 1 should help a lot with airports with lots of pax for your computer to process

Ps. Welcome to the forum !