This has already been identified, proposed, and on things-to-do list. I’m asking and advocating that this feature be prioritized above any other shiny new features and toys. Bugs take priority still. But, I’m requesting this new feature be added before other new features.

I don’t envision that this requires multi-level terminal support that is downstream on the development roadmap. Without this feature, some setups are either highly convoluted or, quite literally, impossible.

So, again, my request is that this feature be moved to the top of the shiny-new-toys list.

Give us Tunnels / Bridges for (Service)Roads, Footpaths and Taxiways too while you are at it

Give us Tunnels / Bridges for (Service)Roads, Footpaths and Taxiways too while you are at it

That requires multi-level terminals. Already in development roadmap. Out of scope for my request.

Here is a perfect example . I would like to add a second Tier I Scanner for incoming baggage. Otherwise, the baggage must go through this single Tier I Scanner, which creates a bottleneck. The baggage is clogged all the way back to the Check-in Desks. I would use a Tilt Tray to split the incoming baggage into two Scanners ; then forward suspect baggage to the left-side inspection chain, while forwarding the good baggage forward. I cannot have a second scanner without crossing conveyor belts.

Sidebar: when will we get rid of those white boxes around baggage when on the Speed Conveyors. They don’t appear on the slower conveyors. I’ve submitted a bug report, BTW. This is an intermittent error. Rarely, the white boxes are not there. 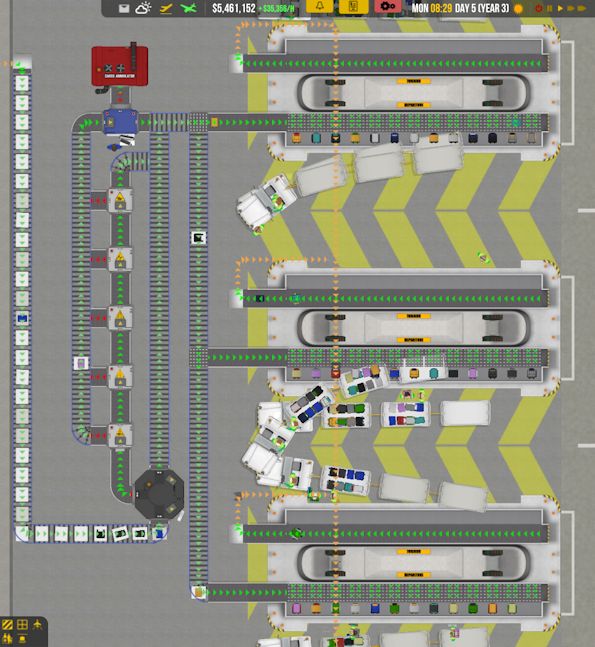 Also, need to be able to run two conveyor belts parallel to each other without them trying to connect. at each point.

Aren’t thos white boxes meant to represent luggage trays? So they can more easily be sorted and stored?
Like this:
https://goo.gl/Ch1UiJ

Aren’t those white boxes meant to represent luggage trays? So they can more easily be sorted and stored?

You can use tilt trays to cross conveyor belts. Just have it set to Destination.

You can use tilt trays to cross conveyor belts. Just have it set to Destination.

Tried it. Failed. thanks, though.

Maybe, if @Fredrik and @Olof, look on this topic here, I would also add this Post from me, about Highspeed Tilt-Trays and Crossings.

White boxes ARE NOT supposed t be there. In my current playthrough. they are not displayed on the Speed Conveyors. They reappear and disappear randomly.