Continuing with our World Cup Of Airlines, it is time for the Oceanic round
Schedule-
29/11- First Rounds
30/11- Quarter Finals
1/12- Final Day!
All votes will be uploaded at 5:00pm GMT and finish the next day at 4:30pm GMT
Due to the lack of airlines in Oceania there are only 8 airlines in this cup
Participants-
Air New Zealand
Air Niugini
Fiji Airways
Jetstar
Qantas
Regional Express
Tiger Air
Virgin Australia 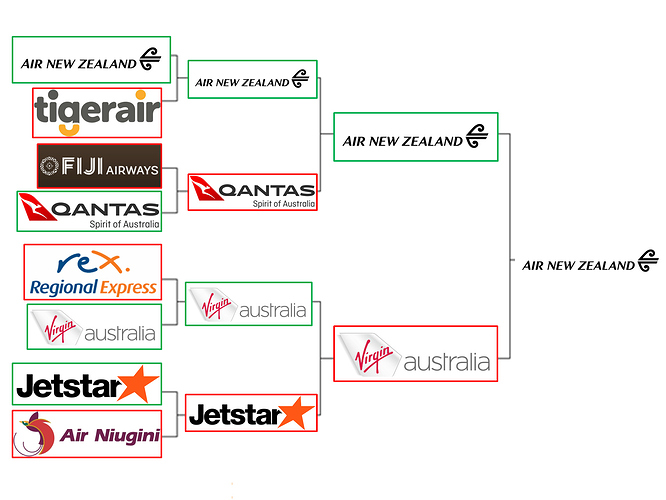 Hehe. I was just joking about the Australian airlines. It’s awesome to see though. It’s a real shame that there isn’t much competition down here in the Southern Hemisphere.

While I’m here… Who on earth voted for Tiger Air?

There really isn’t, it means all our airfares are quite expensive

Me too. They’re the best in my opinion.

I think their all write livery and the typeface is very classy. Besides, I actually prefer flying them to Qantas though as a full service airline they are not quite as developed. I find the service a bit more personable.

Besides, they have that ‘Virgin’ brand youth to it

I agree, not that I’ve flown recently though. I reckon their rebranding from Virgin Blue was really needed. The brand feels a lot fresher and new, and the planes look really classy.

QANTAS apear to have become a bit complacent recently. I think they’re trying to develop their international brand presence instead of their domestic market.

Correct! However… it is one of the few airlines to operate in the Australian Domestic Market. So it really does have a place in this comp.

What about Air PNG? Is Hawaiian Airlines considered American or Oceanian?

There’s not a whole lot to develop in their domestic market I suppose. Australia’s domestic market is heavily saturated and highly competitive regardless of what you do and where you got to be honest. Their incoming 787s may make things interesting though!

Hawaiian Airlines was in the american round

Don’t make me choose between Qantas and AirNZ

I was thinking, is there a skyteam airline in the Oceania? I know that virgin and air new Zealand have some codes are but none of them are actually in an alliance, am I right?

Air New Zealand is Star Alliance and Qantas is One World. Virgin have chosen to form partnerships with a whole range of airlines but are not part of an alliance themselves.

No skyteam, that’s a pity, I wanted to go down there one day with some miles

Well as a NZer, of course I HAD to vote for my nations carrier

Virgin Australia does partner with Delta. Me and my family recently got back from a trip to Aus done on points(miles… they’re one in the same to me). Flew Delta and Virgin.