I can’t remove any of the check-in desks, despite some being disabled, and some enabled. Get the message “Cannot remove a check-in desk with assigned flights.” 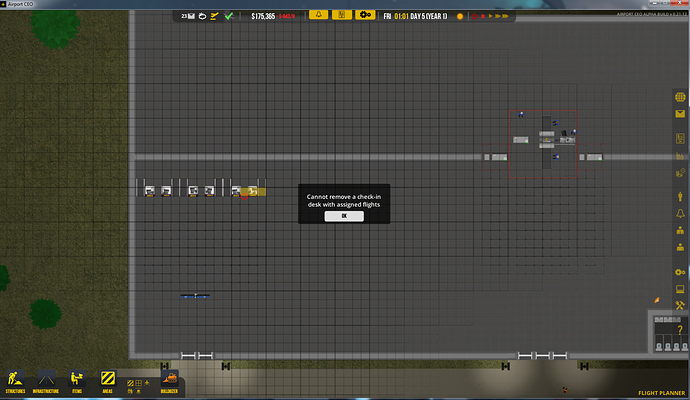 Awesome (kind of). I thought I was going mad as I’m trying to rearrange my check in area and can’t delete them either.
Although something like a desk, trash can, plant pot etc (not structural) should maybe have a move option on it so you don’t have to demolish and rebuild.

Tried that, even shut the airport overnight. It still thinks there are scheduled flights even if the next couple of days of schedule are empty!

Grrr, just had a pile of baggage stuck at the check in. Saved and loaded. Baggage clear and now the option to clear baggage bay and demolish the desks is available.

Must be a bug. I’ll play some more tomorrow.

Check in the code now and you are not wrong, it’s fixed now and will be deployed with the next push. Sorry for this inconvenience!

Thanks. At least I know I’m not going mad now. Will get on with restructuring now.
It’s certainly keeping me amused this game!

Would you care sending in your test so I can validate the fix?

I can’t, unfortunately. Shortly after I posted this, I had another issue that prevented saving. Sorry.

I found two random lost passengers on the Tarmac (don’t know how they got there) with tickets to old flights.

Could that be the reason why everything is still associated with flights that don’t exist?

Had this bug to. It helped to sign a new airline contract and then wait until all flight of this new contract are done.

I destroyed my stands and made new ones. Expensive but worked too

Would have been much cheaper to cancel the contract.