The idea is to bring a brand new airport to Balneario Camboriu city.

Balneario Camboriu is a tourist seaside city in south of Brazil with 140,000 of resident population.
However, over the year, mainly during the summer, the city attracts over 2 million people between visitors and vacation residents making the population density to reach 22,000 people per km².

The city is famous for its natural tourist attractions and nearby beaches, world’s top nightclubs,
gastronomy and of course for its vertical buildings which makes Balneario Camboriu to be the brazilian Dubai city. Over the years, the city is growing rapidly. It’s already a destination of cruises, and a new airport is a must need.

The airport has two terminals: domestic and international.
Two runaways, one for departures and one for arrivals.

The domestic terminal consists of 22 gates, 4 of which are remote gates.

As soon as the pax leave the security from upstairs, they arrive to the terminal plaza.
The terminal plaza is the terminal center that connects the boarding terminal wings A, B and C.
It also give access to the downstais (1st floor) where remote gates and baggage claims are located.
It has toilets, stores, vip lounges, and it has a food court in a mezzanine in which downstairs can be seen.

The international terminal consists of 2 gates.

The city attracts a lot of latin tourists mainly argentine and uruguayans, therefore latin american airlines operates in this terminal such as Avianca, Aerolineas Argentinas and Copa Airlines.
Looking for attraction options other than carnival in Rio, Balneario Camboriu is already a route for
tourists from USA and Europe brought by American Airlines and TAP.

As soon as the pax leave the security from upstairs, they arrive to the international terminal.
The international terminal is a large terminal with restaurants, stores, toilets, a vip lounge and it connects to gates F1 and F2.
It’s forbidden for arrivals get into boarding sector. There is a mandatory path for arrivals that goes to downstairs (1st floor) in the immigration sector. After the immigration, the pax have access to the baggage claim and customs check. (All done for the next update

)They exit through an international duty free store.

The arrivals plaza is located on the 1st floor. It’s where all the pax arrives from domestic terminal in the north and international terminal in the south. The plaza has restaurants, stores, toilets and connects the check-in area upstairs and transportation area (subway, bus, taxis, parking) downstairs.

The security area is located on the 3rd floor where all leaving pax must pass. There are two security sectors: one that connects
to the domestic terminal and other that connects to the international terminal. 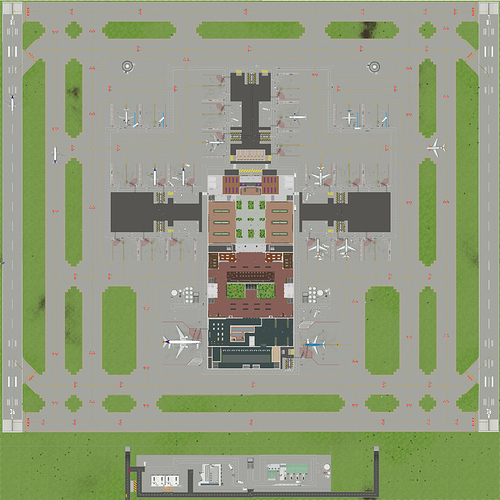 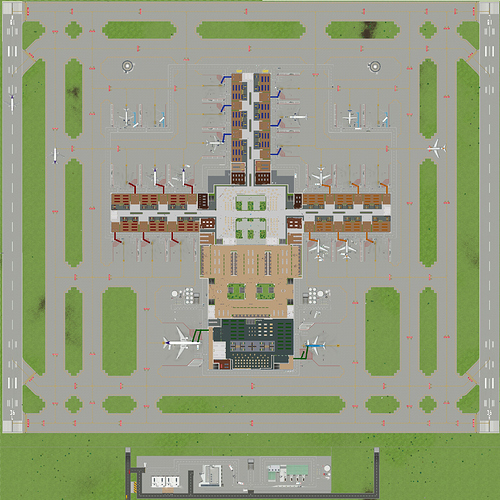 PS: I forgot to take a pic from the -1st floor, I post later. 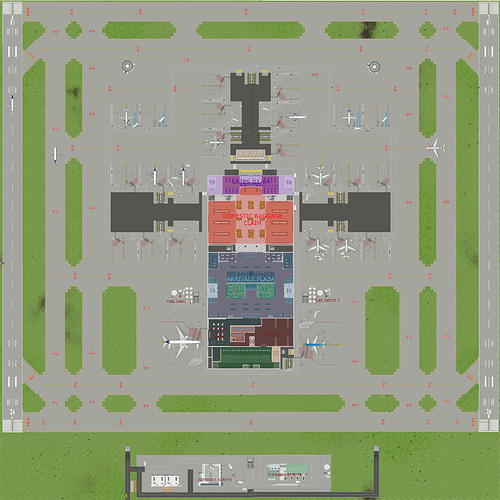 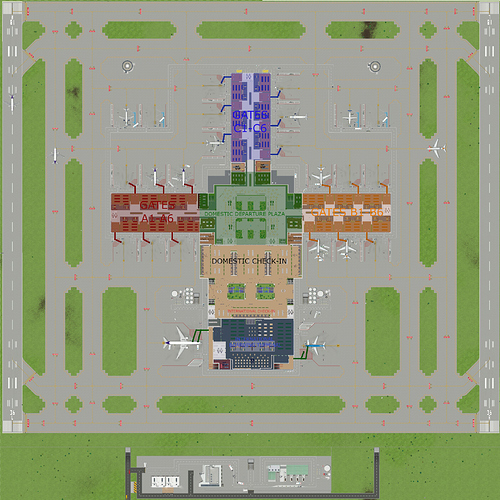 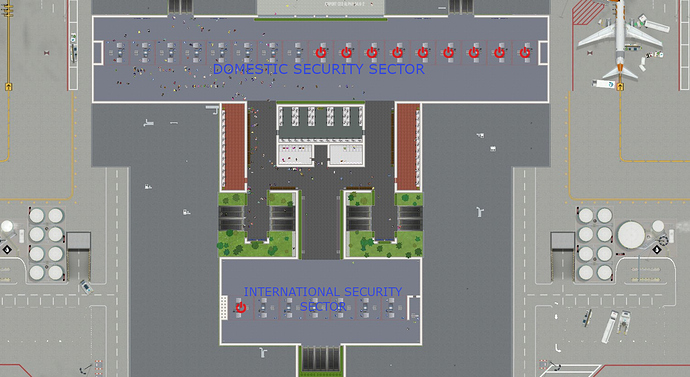 Welcome to the forum and welcome to the game! Looks very nice, very creative! Impressive what you have build! I really like the road network, do you have an underground picture as well? Could you please re-post the first 2 images, as I cannot see the ‘imgur’ images. Also very interested in detail screenshots of certain areas. How is the performance of the game as you’ve filled practically every inch of the map

The performance is not that bad, I got an average of 20-25 fps with double-speed, 4.5k pax, 300 staffs, and 14 aircrafts. I have scheduled 62 flights a day.
I have an underground picture, despite that is the floor I least dedicated to. 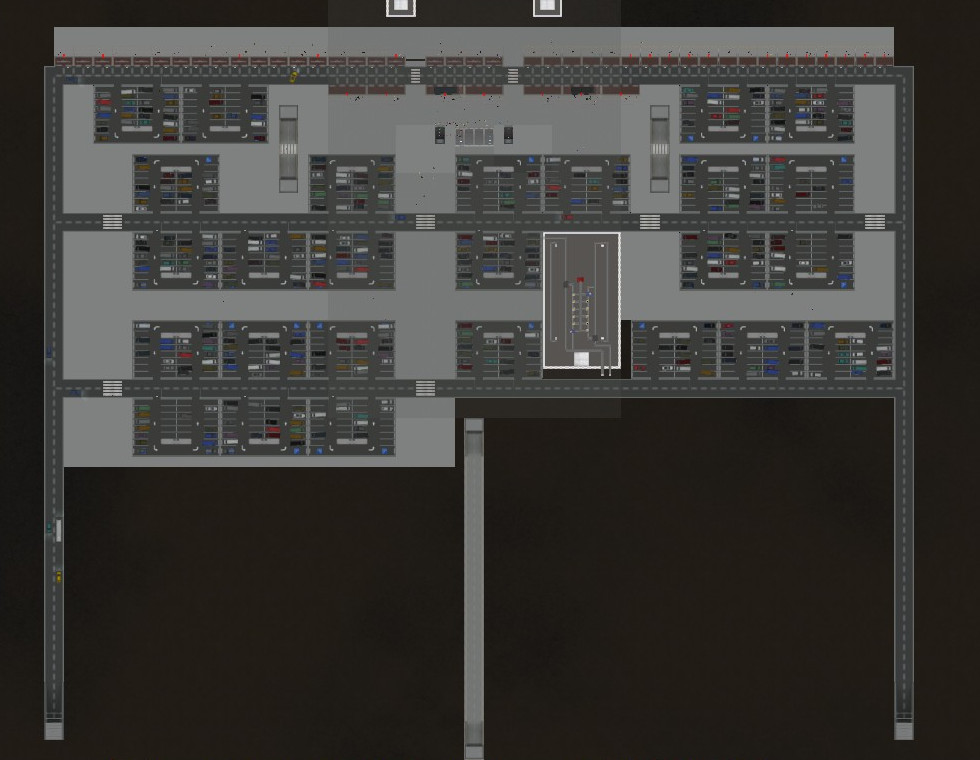 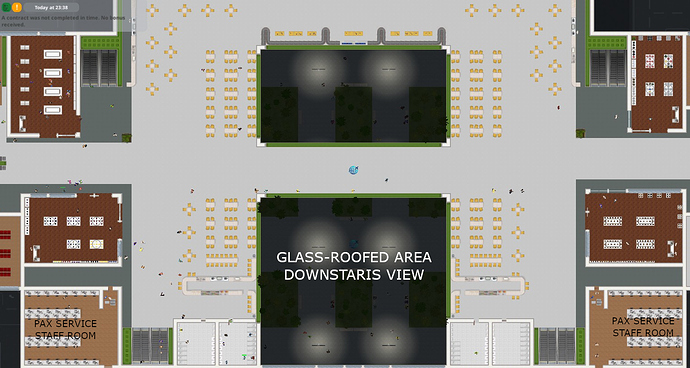 PLAZA1500×800 381 KB
This is the domestic terminal plaza. It connects the three boarding terminals wings of gates A1-A6, B1-B6 and C1-C6. It has a food court closer to a mezzanine of glass-roofed like a mall. And it is surrounded by stores. 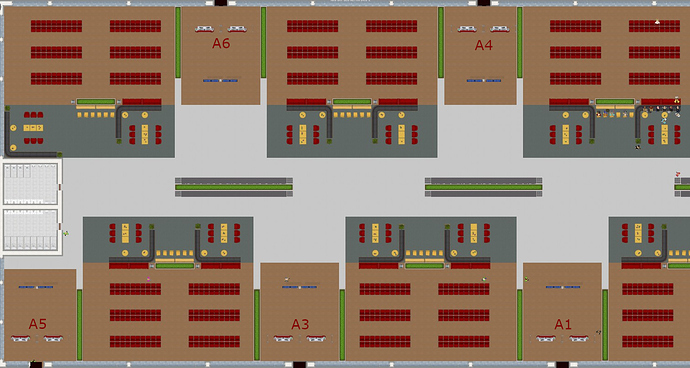 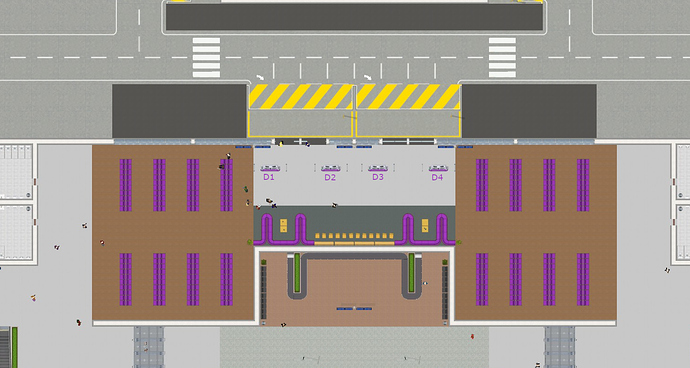 remotes1500×800 309 KB
Here are the remote gates D1-D4 and are located downstairs from the domestic plaza. 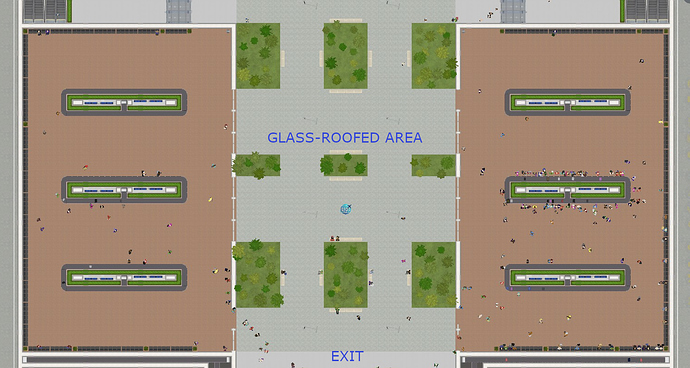 baggageclaimarea1500×800 427 KB
Here is the domestic baggagle claim area located downstairs from the domestic plaza. It has a glass-roofed corridor in which pax without baggage can follow until the exit or get their baggage in the claim sides areas.
feafh March 5, 2020, 3:20am #9 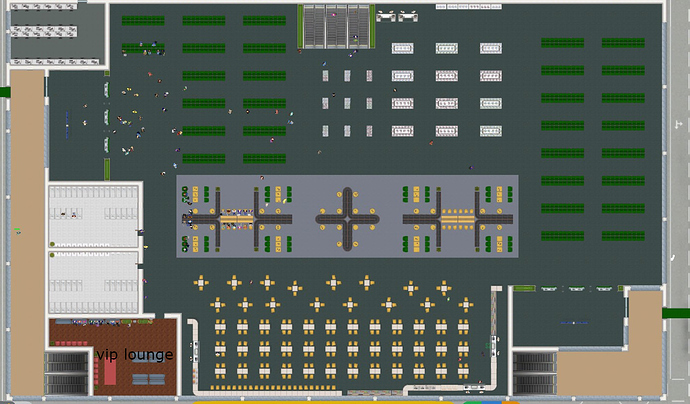 int1400×820 260 KB
This is the international boarding terminal. It has only two gates F1 and F2. It is completely separated from the domestic terminal. The arrivals pax follow a path to downstairs escalators. They cannot access the boarding terminal. 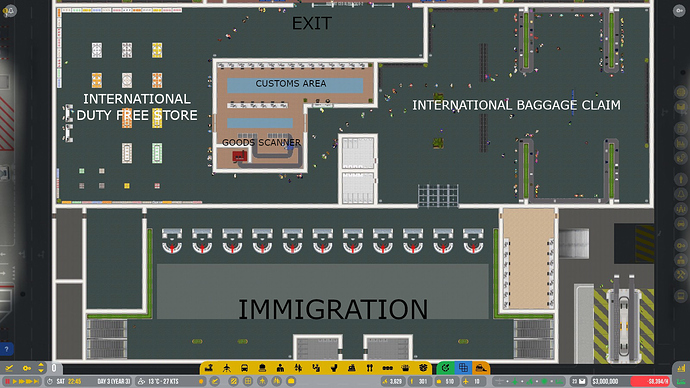 ) , international baggagle claim, customs sector and an international duty free store, then the exit to the arrivals plaza.
feafh March 5, 2020, 3:26am #10 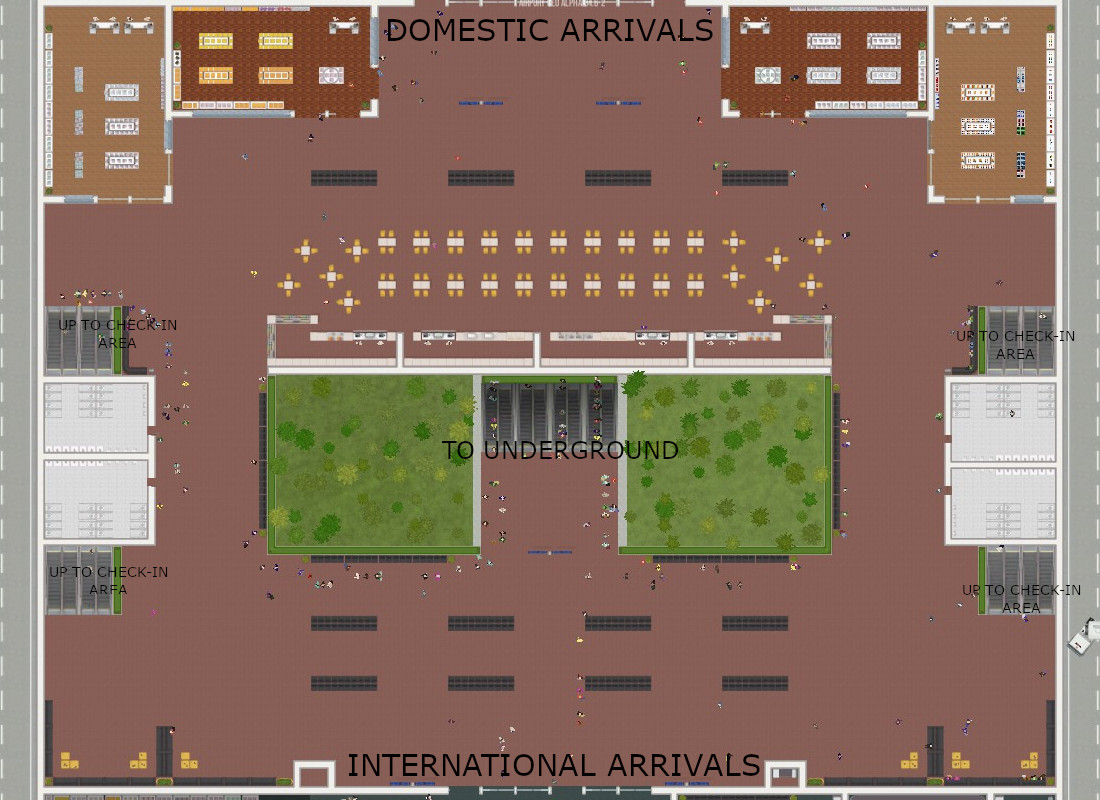 ARRIVALS1100×800 215 KB
Here is the arrivals plaza where domestic and international arrive. It connects the underground floor where has parking lots, bus, taxis… and the check-in area upstairs. 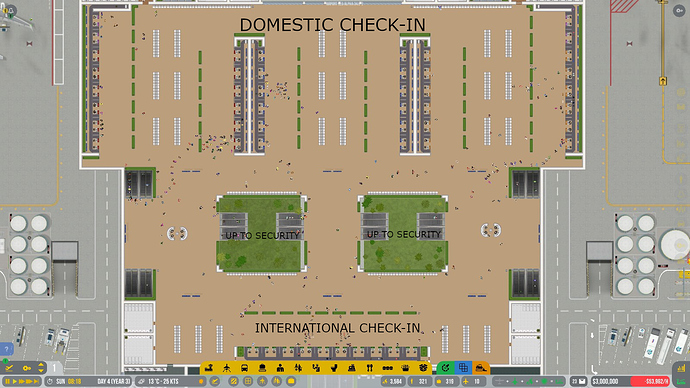 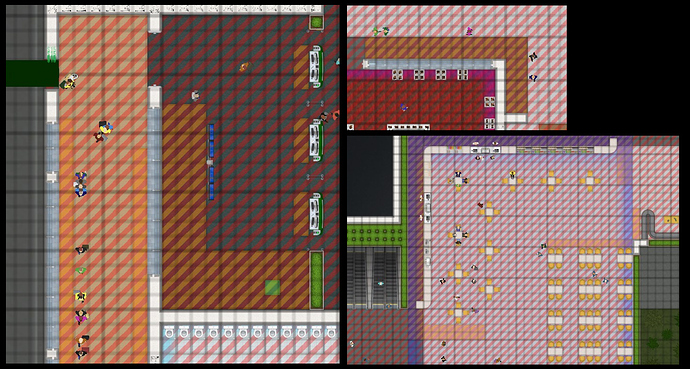 tricky1400×750 537 KB
Here is a tricky that I would like to share with you. I usually use a staff zone area to force the pax to follow a proper path. For example, I put staff zone closer to wall edges to force them walk in the middle of the corridor. Or, use the staff zone to not permit pax walk through restaurants or stores.
4 Likes
Jettuh March 5, 2020, 8:23am #12

That’s a huge and impressive airport!

Very good job on the hole airport its HUGE! Will take inspiration from this as well very well laid out.

What a Nice Airport!
I search for a good inspiration and that ist exactly what i was looking for!

Never thought about putting a duty free store in arrivals - not sure why I haven’t! good idea