If only we could build queues to boarding desks to prevent passengers from overlapping queues and improve boarding efficiency. 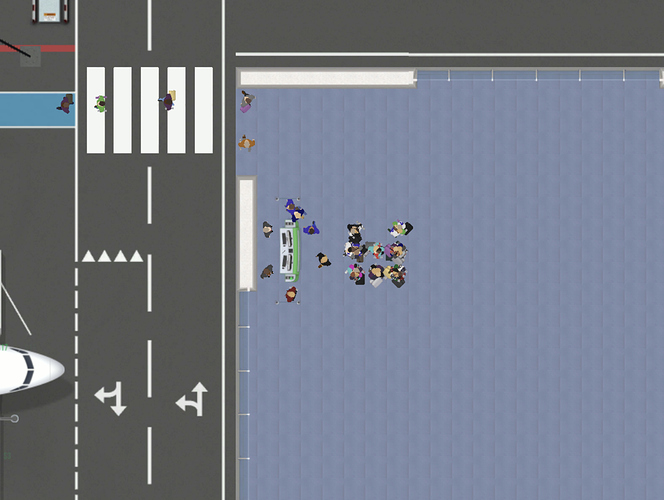 Me, @Jettuh and @JeremyK has had a lengthy discussion about this today…

… basically they are stacking like that for you since there are no seats and they have to stand around waiting. We might consider added the ability to build static queues for those desks but I am not looking at doing that for Alpha 33.

But in real airports, there are about two rows of queues and the passengers form the line themselves.

Depends on the airports (and a bit the airlines). For example in Munich - at least Lufthansa’s Terminal 2 - there are no queues and the screenshot looks quite similar to reality. On the other hand, on an international flight in Frankfurt they ad least had a separate line for priority boarding. So it would be nice to have the option for queues without making them mandatory.

I fly quite a lot and I don’t see that much build queue’s at boarding desks, they’re formed ‘naturally’ as there is a separation on economy and priority/business boarding. If it would be build it would be great to be able to separate that as well on queue level

I also think, that, It would be awesome if airline gave requierment like business separated desks (check-in, boarding desk.)

There can be a dedicated boarding lane for priority passengers but also another method of organised boarding is zonal boarding.

Actually, there are seats; a lot of seats. They tend to choose to stand for unknown reasons, causing a surplus in seating space.

For me the problem is the “piling” of passengers.

I don’t mind not having the queue (I build them with hedges if I need them) but having the overlapping of passengers, it just feels wrong and it is (sorry) visually ugly (but like really ugly!

Hey Olof, I hope you haven’t forgotten about us Boarding Desk Queue Fans ?

Well, there’s actually a bug in right now which causes all passengers to flood the boarding desk and disregard of queuing. I will fix that, but I might also considering a button where you can build your own boarding queues. But nothing promised…

I like my boarding desks queless and my pax clueless.

Please do, boarding desks queue is important and I’m tired of passengers stacking on each other at the end of each queue.

When testing I always built desks without queues, but I like them when they’re there, but really don’t like it to set each and every queue individually for every desk…

There you go, all check in desks with queue!

can the que also be designed that if the que is full, the remaining passenger sit around or carry roaming around instead of there being 30 passengers huddled together at the end of the que

Not right now, no, there’s a lot of things happening in the passenger determination code and there will be upcoming changes and improvements that target other stuff primarily.

I understand, but I certainly hope this can be fixed/implemented in the far future.

Would love to see boarding gates become consistent with check in and security, able to create queue systems.

Though partly agree that an orderly small crowd is at some airports realistic, I think that is just very lucky timing not to get trampled on by a mad rush of passengers (real world). So the option to drag out a queue or leave it to do without would be a cool function similar to the other desks